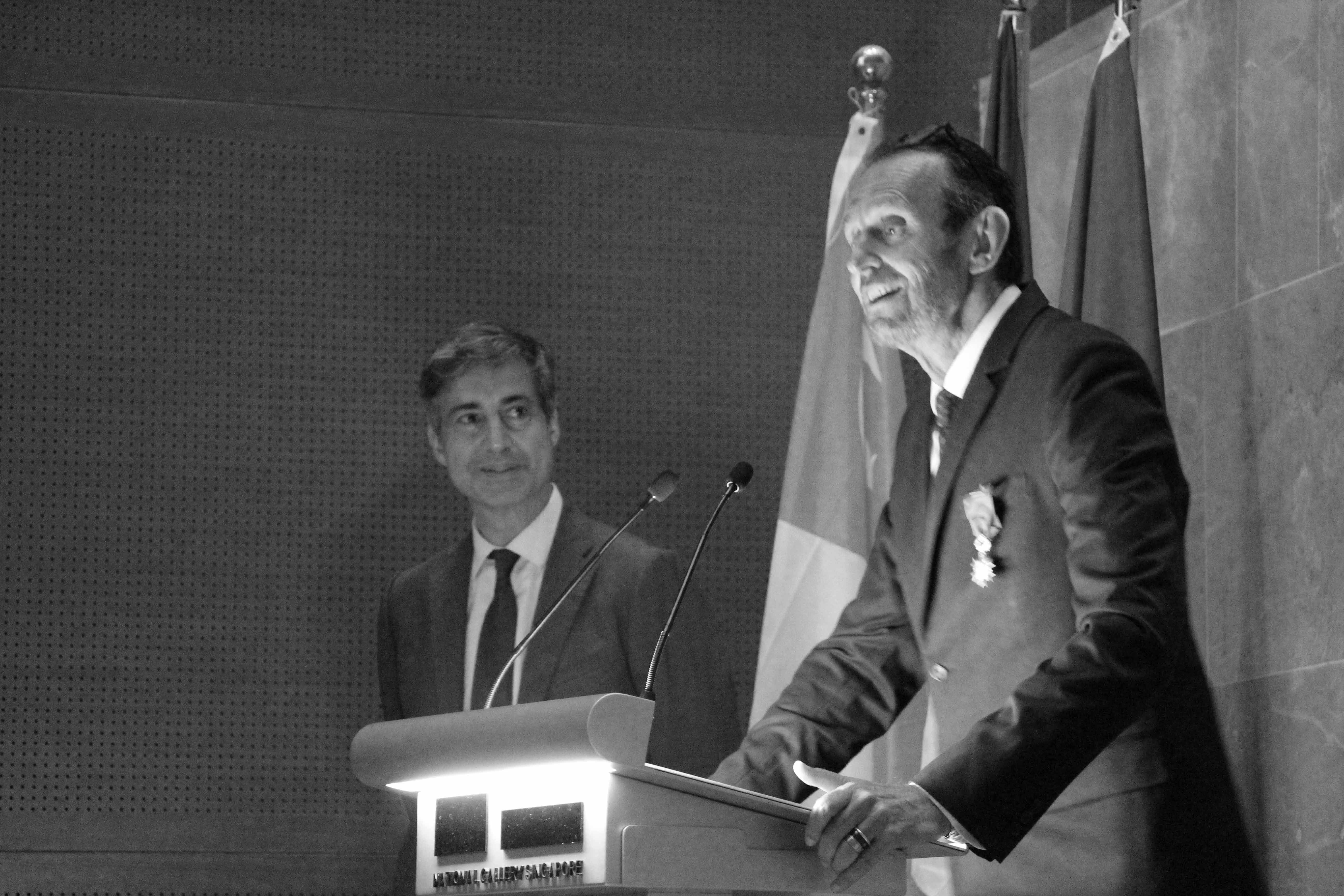 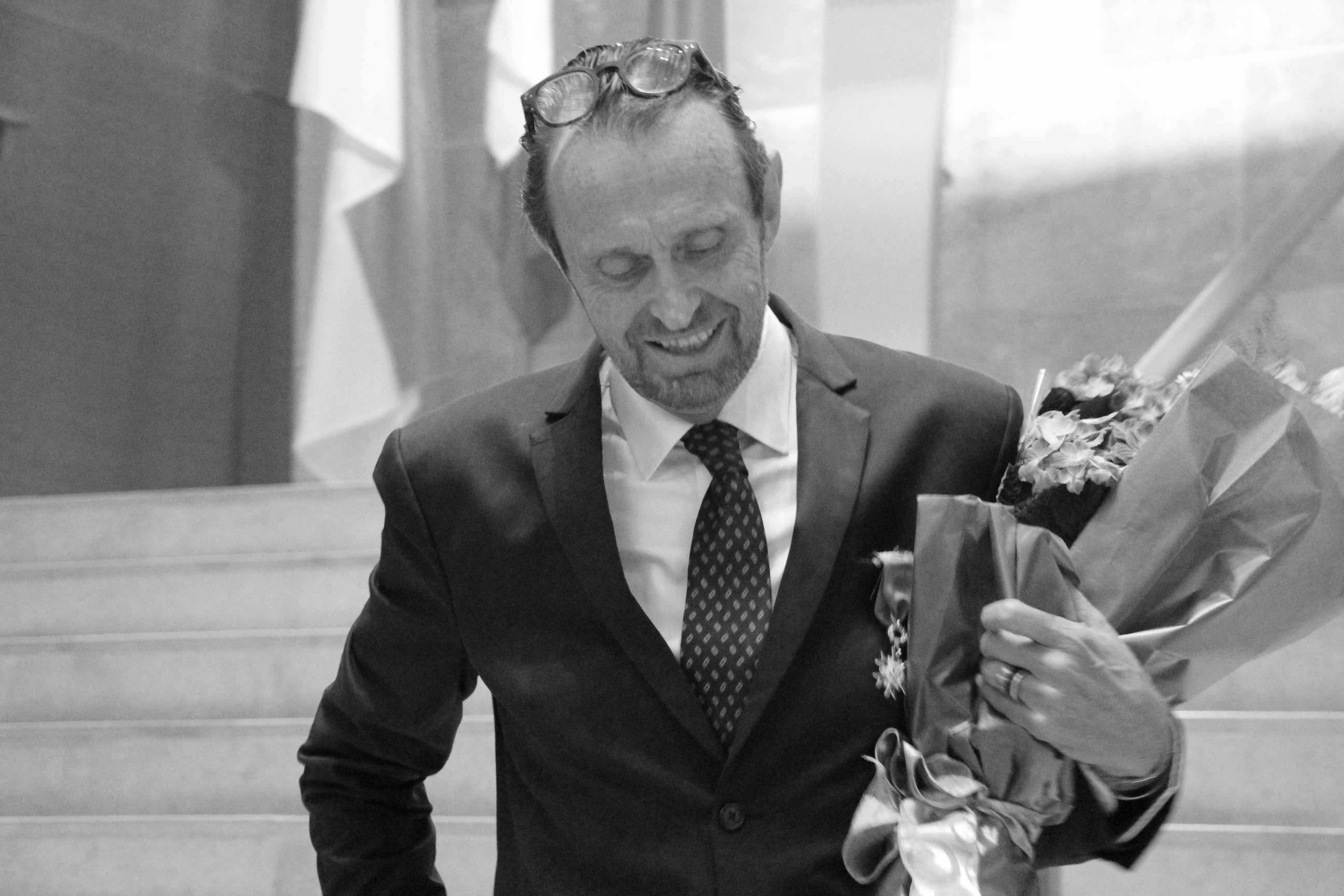 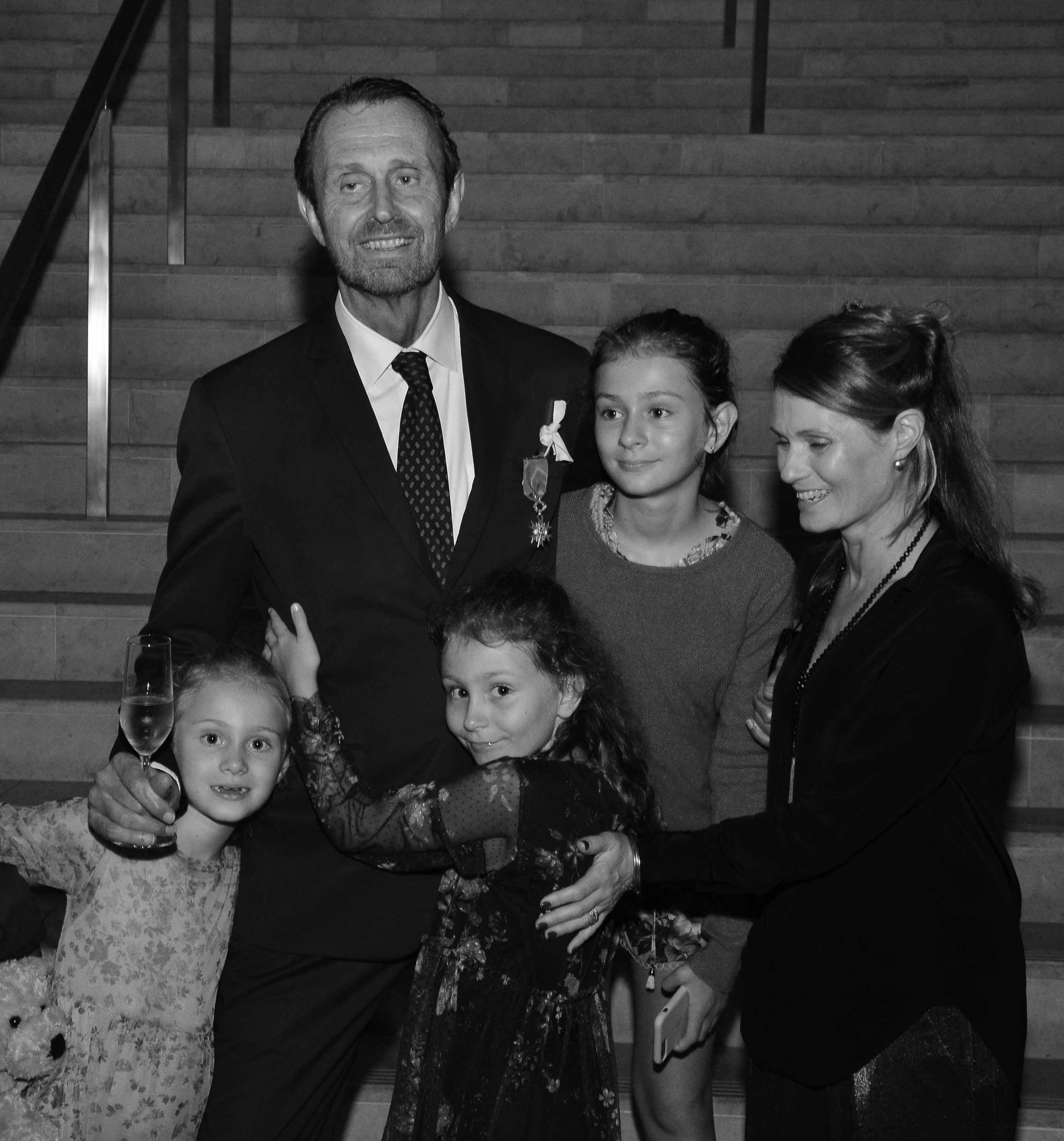 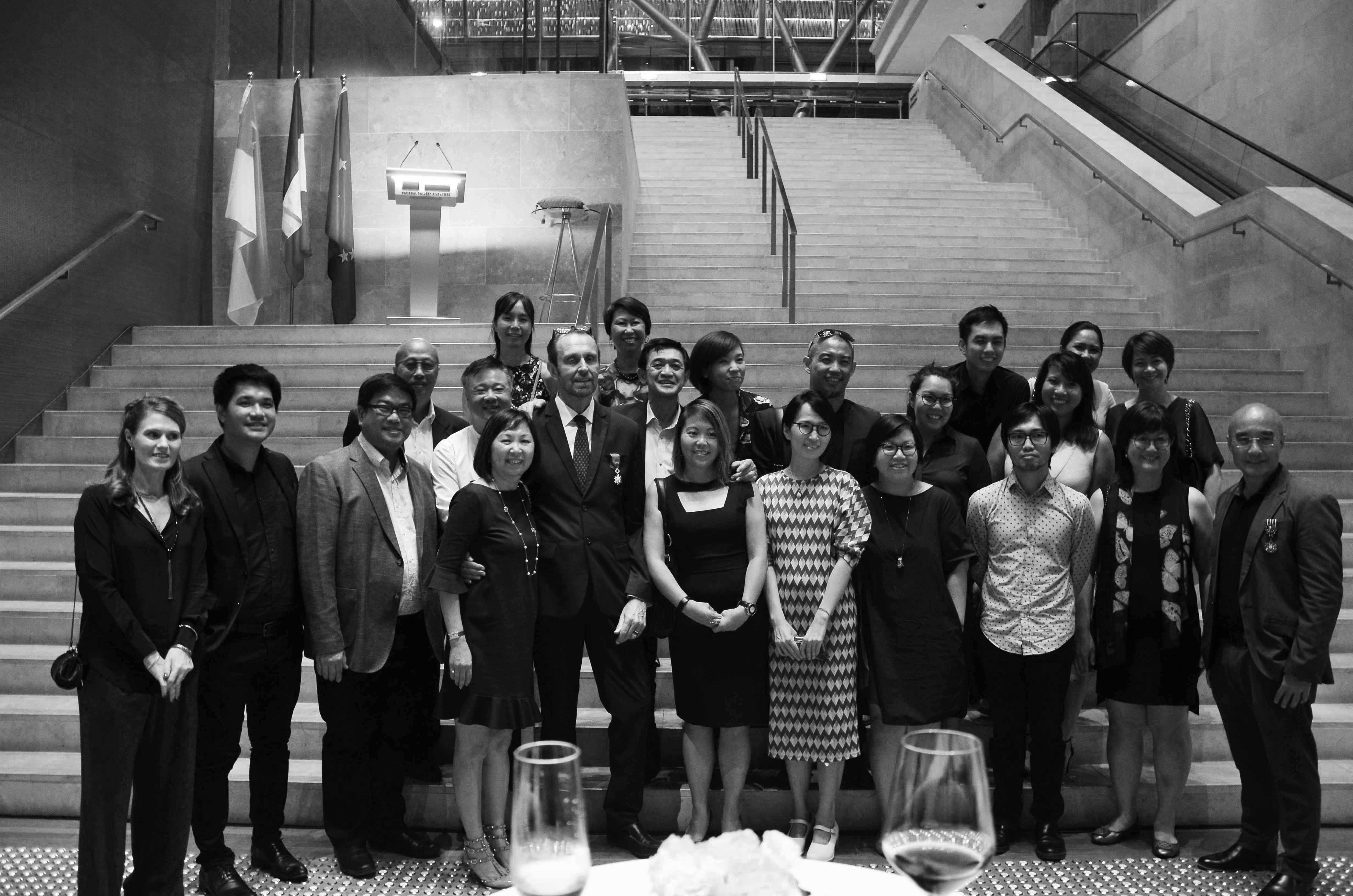 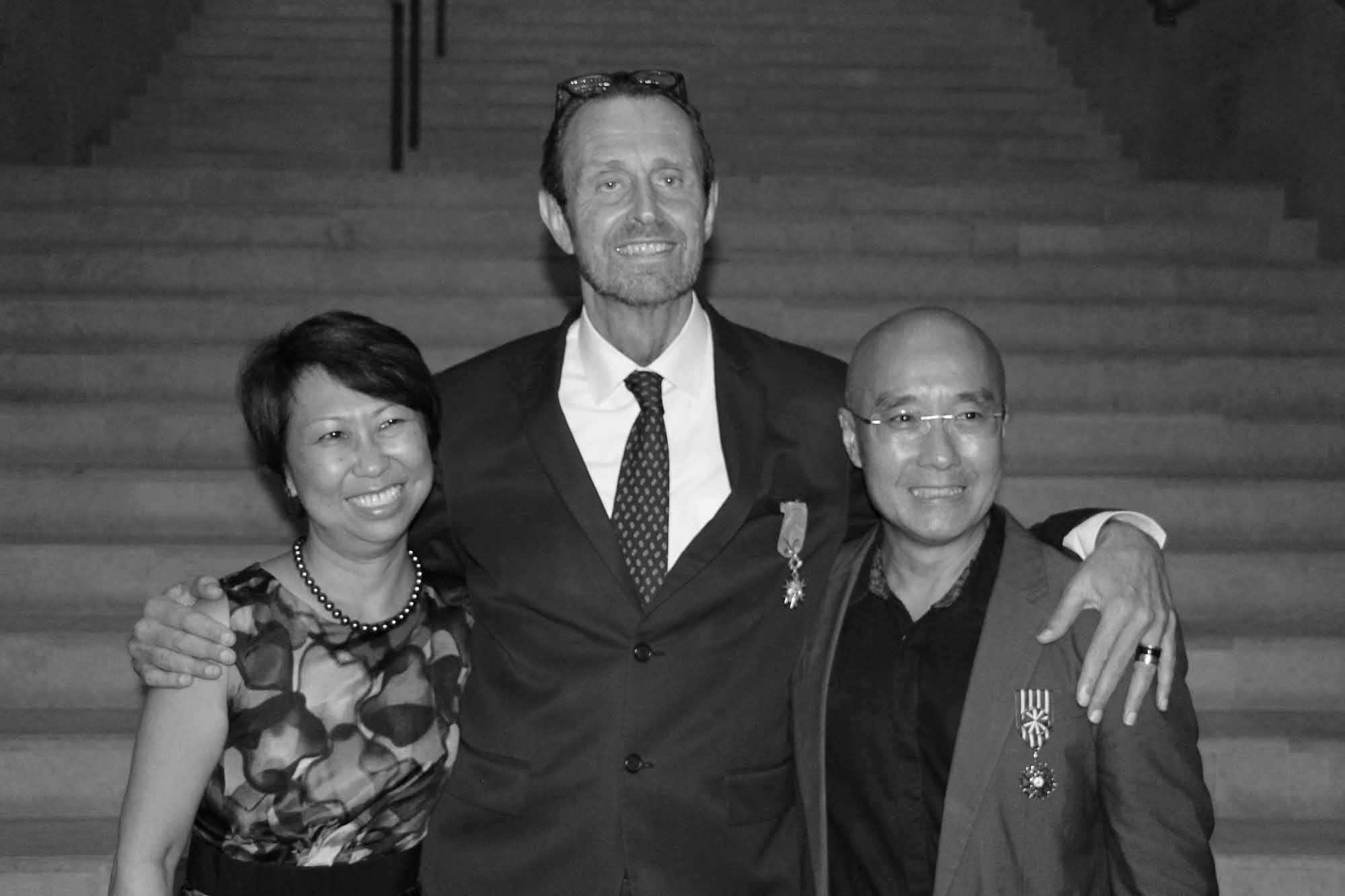 Tonight, we are gathered in the majestic Atrium of the National Gallery of Singapore for an official ceremony: to award the Ordre National du Mérite to French architect Jean-François Milou. I am particularly pleased to have this unique occasion to celebrate the achievements of a master designer of forms and spaces in one of his most iconic buildings here in Singapore.

It is your mastery of drawing that led you to study the art of building. You graduated from the EcoleNationaleSupérieure des Beaux-Arts de Paris and also have a background in archaeology, a discipline that you consider as a field of architectural research.

Looking at your impressive career, it seems that what guides your architectural practice is a deep motivation to create aesthetic emotion and to find innovative solutions for spaces that serve a greater idea of beauty. I would say that three men coexist in you and are constantly engaged in a fruitful conversation with one another : the aesthete, the entrepreneur and the man of palimpsest.

An aesthete with a highly sensitive approach to design, because you consider that “good architecture is an elegant solution to a complex problem”. This design philosophy and your subtle conception of architectural work are clearly visible where we stand tonight.

The idea of drawing a line between the two historical buildings became the signature of your project. By draping them with a metallic roof and veil, you created a fine balance between old and new and achieved a very special sense of timelessness.

For Le Corbusier, “architecture is the learned game, correct and magnificent, of forms assembled in the light.” Here, you used the light, an invisible element, as a unifying agent between the two buildings and filtered it throughout the gallery spaces. You build on the invisible, the same way musicians compose using silence.

A few months ago, the National Gallery opened Century of Light, two major exhibitions including rare masterpieces from the musée d’Orsay, which showed how the Impressionists masterfully captured the transient effects of light on the canvas.

Looking back, it seemed that these luminous artworks had found a second home in this building. I would say just like you in this country. I believe it is because you placed the architectural gesture and the art experience in intimate dialogue and in resonance with each other. This is not only a precious gift to all museum-goers and art lovers, but also a genuine mark of your excellence.

I said an entrepreneur: as an architect, you are trained to constantly negotiate and compose with material constraints, technological needs, curatorial demands and political visions. It is obvious that your ability to factor in all these various dimensions makes you also a great entrepreneur, with a strong vision that extends well beyond the borders of France.

You founded studioMilou architecture in Paris in 1997 and quickly established your practice as one of the leading French architecture firms. Your competence is recognised in large-scale cultural and educational projects, such as the School of Fine Arts of Caen or the Cultural center of Rambouillet.

As a team leader, you expect the best of your collaborators and consider the act of transmission essential. You have the ability to bring together a set of skilled architects, landscapers, exhibition designers and heritage specialists to work on challenging proposals.

In order to lead the ambitious project of the National Gallery of Singapore, you opened a new branch of your studio in 2008 and relocated here with your family. This decision marks a new chapter in your international career and led to the expansion of your practice in Asia.

But beyond the aesthete and the entrepreneur, what characterises you the most is what I call the “man of palimpsest”, who is deeply committed to reinventing the past while respecting the complex historical, cultural and political fabric of each project.

Over the years, you combined your passions for prehistory, archaeology and the arts and developed an expertise in international heritage, conservation and rehabilitation of monuments and the creation of museums.

It is not surprising that your first project in the cultural sector was the creation of a museum on an archaeological site, the Museum for the Tumulus of Bougon in your native district of the Deux-Sèvres in central-western France.

Among the many projects that illustrate this dynamic, I can only mention a few: the Comédie de Saint-Etienne (National Theatre Center of Saint Etienne) built from an industrial site, the former harbour station in Cherbourg, Normandy, that you converted into the Cité de la Mer (Maritime Museum), and the former wool-spinning factory in Mulhouse that now houses the National Automobile Museum. In Paris, you also supervised one of the studio’s most renowned projects: the restoration and transformation of le Carreau du Temple into a cultural and sports facility in the heart of le Marais district.

The National Gallery of Singapore is of course the culmination of this approach. Please allow me to come back to this remarkable endeavour, because it says a lot about Singapore’s identity, about your work philosophy and your relationship to this country.

Your proposal was chosen among 111 others to design and build the National Gallery of Singapore, which was slated to open in 2015 for the 50th anniversary of the independence of Singapore.

Instead of commissioning a spectacular architecture piece that would become a new cultural landmark, the Singaporean authorities decided to restore and reuse two buildings that had major historical significance: the former City Hall, created for the British colonial administration in the late 1920s, and the former Supreme Court.

These buildings witnessed many key events in the history of Singapore: the Japanese Army’s official surrender to the Allied Forces in 1945, and the founding of the first independent government of Singapore by Prime Minister Lee Kuan Yew in 1959.

Dear Jean-François Milou, you succeeded in uniting two historical edifices, preserving their original architectural integrity and celebrating them as a national heritage, while creating a new visual identity for the National Gallery.

With this major project in Singapore and throughout your career in France and abroad, you have combined both mastery and subtlety of execution and demonstrated a relentless sense of achievement without compromising on beauty, quality or efficiency.

You have also been able to honour the past while providing fresh and new human experiences for present and future generations to reflect upon and to appreciate.

Your active contribution to strengthening the cultural ties between France and Singapore is invaluable. For all the reasons, you are fully entitled to receive this award.