Project for the Gare maritime

The contracting authority, the Communauté urbaine de Cherbourg, wished to construct a major cultural centre on the prestigious site of the historic Cherbourg Gare maritime. A Europe-wide architectural competition was therefore launched, in order to draw up an architectural and urban plan as part of the general enhancement of the area, which would involve rehabilitating the area’s architectural, military and naval heritage.

In response to an ambitious proposal of this sort, together with a limited budget, Studio Milou Architecture drew up a project to be completed over several phases and aiming to arrange the new Gare maritime around a submarine, Le Redoutable. Facing the sea at the end of the jetty, the exhibition hall, train hall, Gare maritime and the Redoutable thus appear grouped together on the Atlantic jetty, thereby constituting a piece of the town “set down” in an unexpected way in the middle of the harbour.

This architectural ensemble is integrated into a landscaped public park facing the sea. It constitutes the first step in the construction of a maritime park next to the sea, which will connect the end of the jetty to the swing bridge and extend the pedestrian walking areas of the Cité de la mer to the historic centre of the town of Cherbourg. 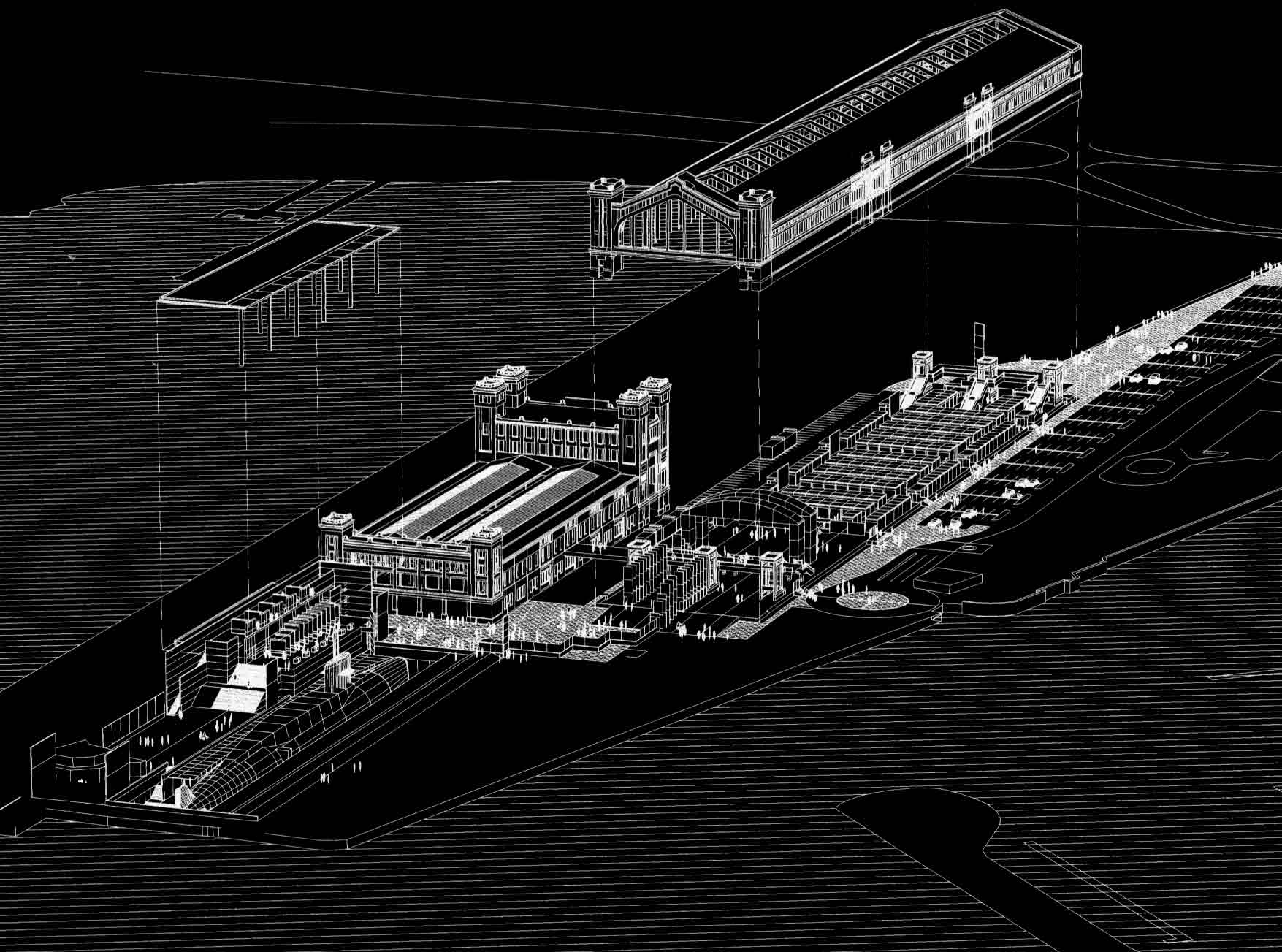 Isometric projection of the project

A submarine in the city

A garden, a converted train station from the 1930’s, a large submarine in the port dock area, all in the middle of the harbour: the Cité de la mer – City of the Sea – in Cherbourg is an architectural project that includes the conversion for public use of elements of the city’s architectural and naval heritage and the opening to visitors of the historic Cherbourg Gare maritime and submarine The Redoutable.

This prize-winning project from Studio Milou Architecture included in particular the construction of a dry dock at the end of the jetty to house the Redoutable, built along the length of an exhibition hall that naturally extends the historic Gare maritime. In addition, this technical solution had the advantage of discretely integrating the Redoutable into the existing townscape and harbour.

Transported at high tide and set in place by simple drainage on chocks at the bottom of the dry dock, the submarine now rests at sea-level, neither visually nor symbolically dominating the harbour area. Architectural studies for the dry dock housing the submarine and for the Cité de la mer began in 1997, with work on the dock beginning in 1999 and the Redoutable being transferred from the Cherbourg Arsenal to the Gare maritime site on 4 July 2000.

The new dry dock created for the submarine 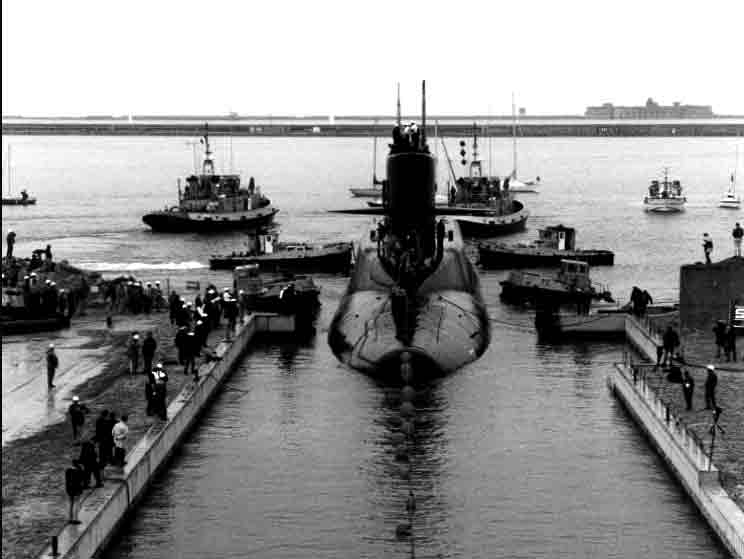 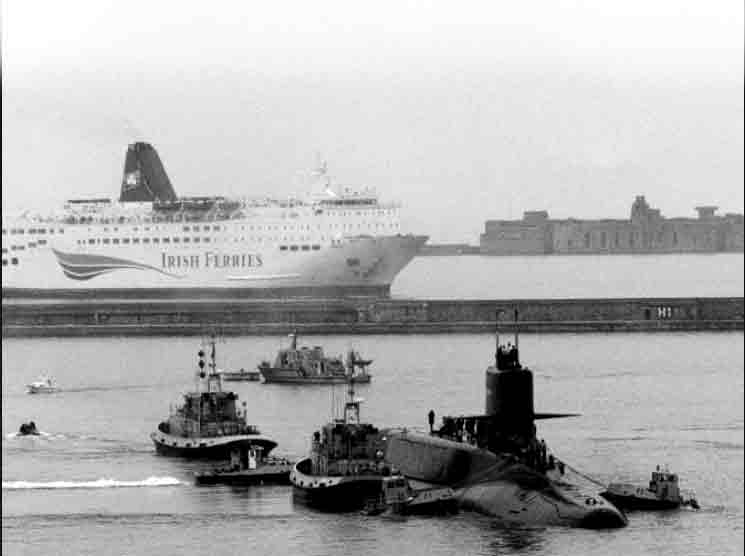 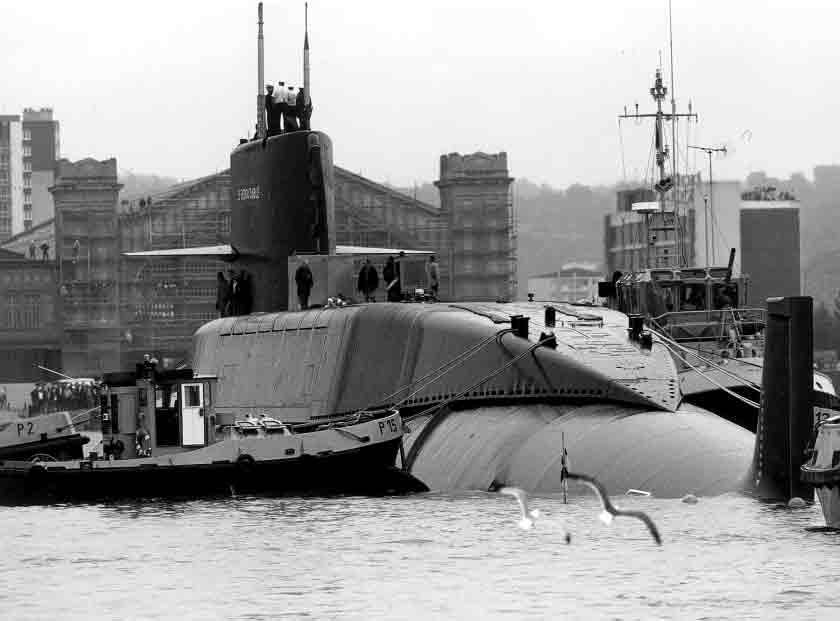 Installation of the submarine in the new dock area

Studio Milou Architecture won the 1996 architectural competition, in association with Onde and Thomas, the designers in charge of the exhibition design.

The initial project planned for the construction of an exhibition hall in the form of a gallery extending the Gare maritime and overlooking the Cherbourg harbour area.The visitor would be led through a series of alternating spaces, some dark and given over to various audiovisual presentations, and some lit by natural light and given over to the presentation of the collection.

This design would give Cherbourg a hall at the end of the maritime park that would be a stopping-off point on a promenade through the site. The contracting authority wanted to change the initial design proposal, choosing instead a closed museum not lit from the outside and limiting exterior views, in order not to interfere with a design that would present audiovisual materials exclusively in darkened rooms (proposal for the Cité de la mer by Jacques Lichnérovitz, with design by Gulliver). 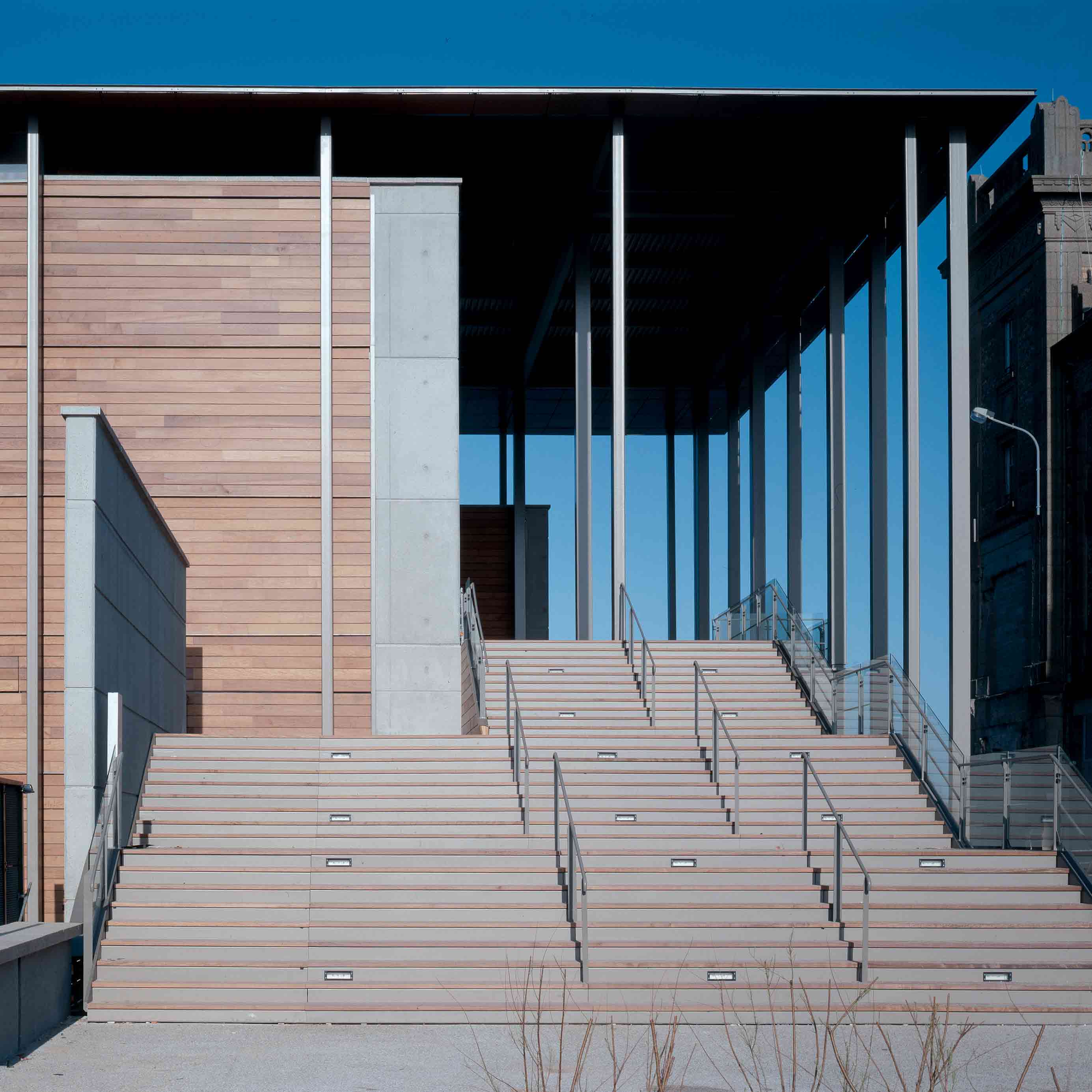 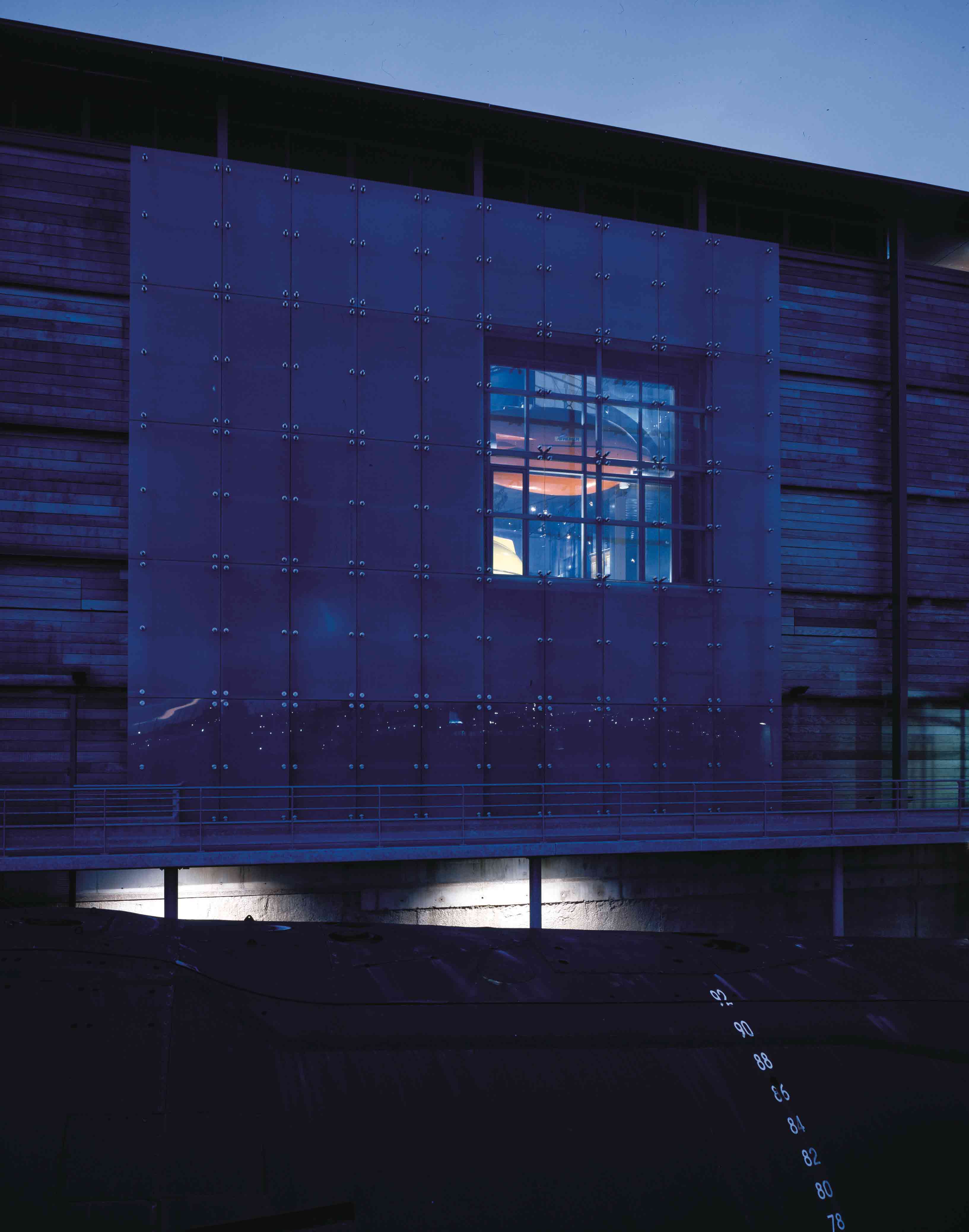 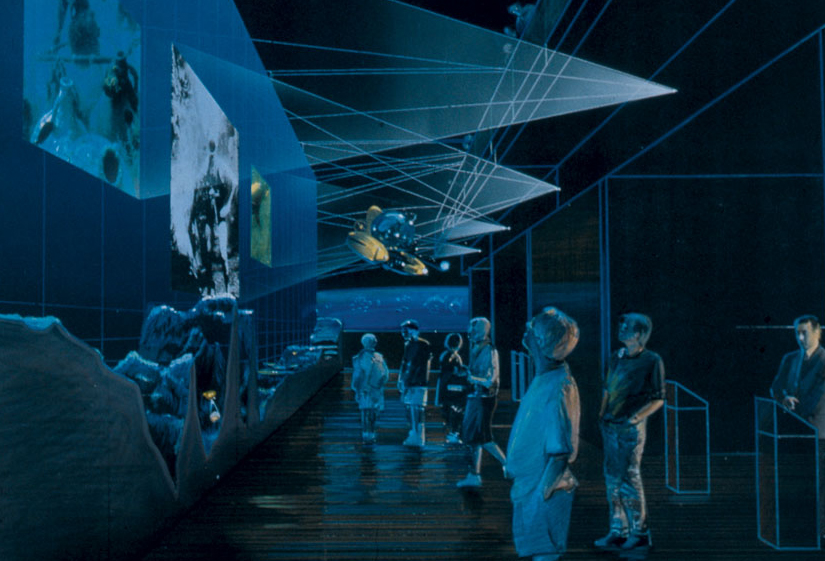 The Cité de la mer project used the same materials as those used in the construction of the historic station.We wanted to create a sense of architectural unity in the project that would be directly felt by the visitor by using a limited number of different materials, and work in the train hall reflects this decision to go for simplicity.

The following materials were used in the construction work:

• Pinkish beige concrete with granite aggregates Basic material of the Cherbourg Gare maritime, this was used for any restoration work necessary on the train hall.

• Mat varnished red wood The red wood (mahogany, stained oak) that gives the Gare maritime its character was used for the floors (floor of the museum), certain facings (signal boards in the museum and hall, existing roofing of the hall) and all the furniture and other fittings of the Cité de la mer. 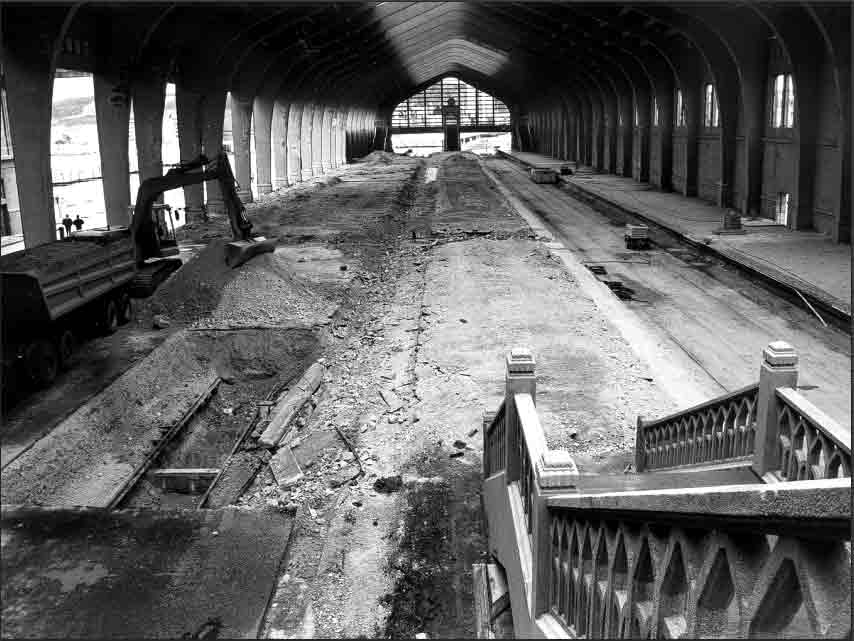 The train hall before the work began, 2000 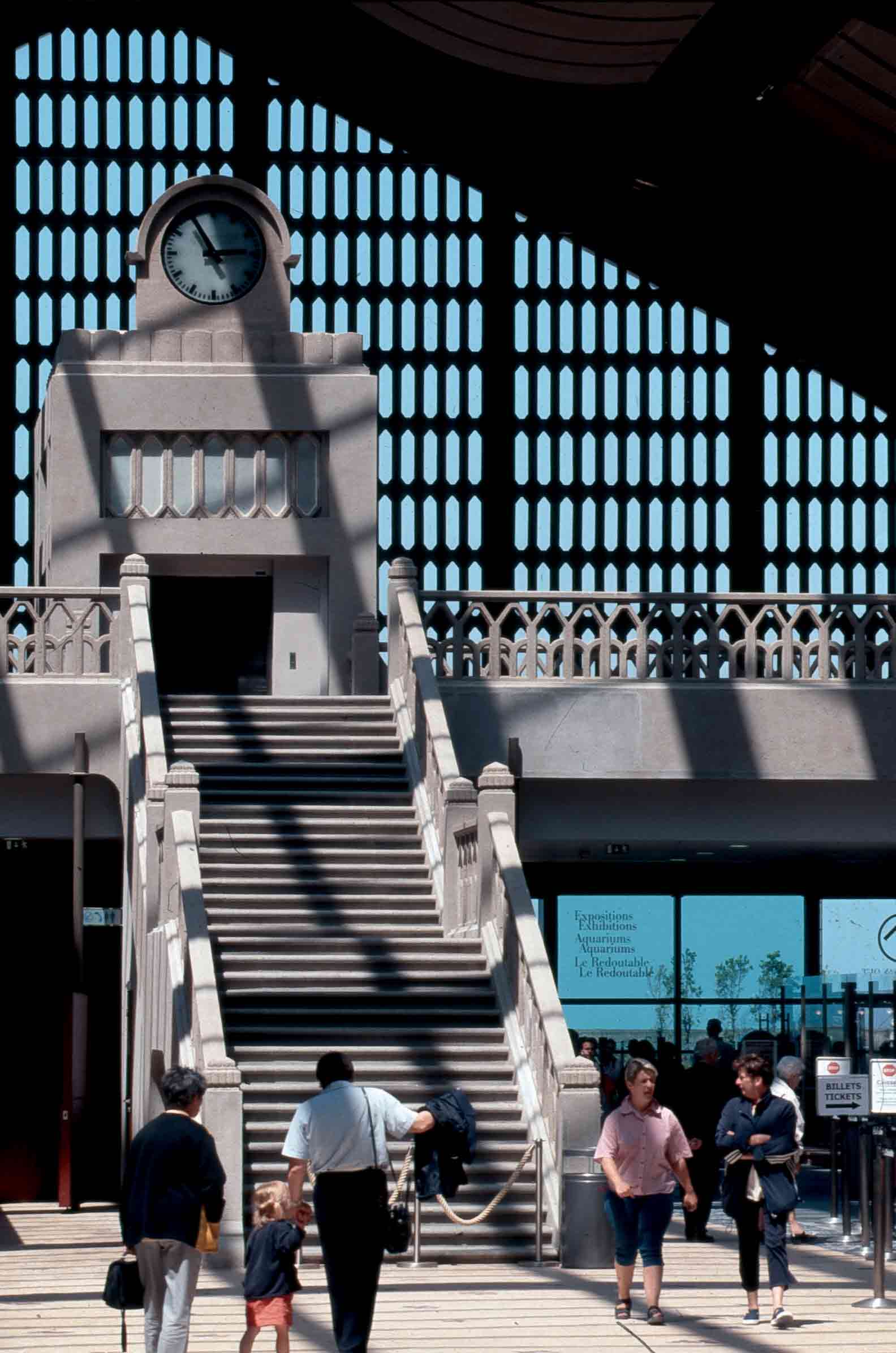 Entrance to the Cité de la Mer from the train hall 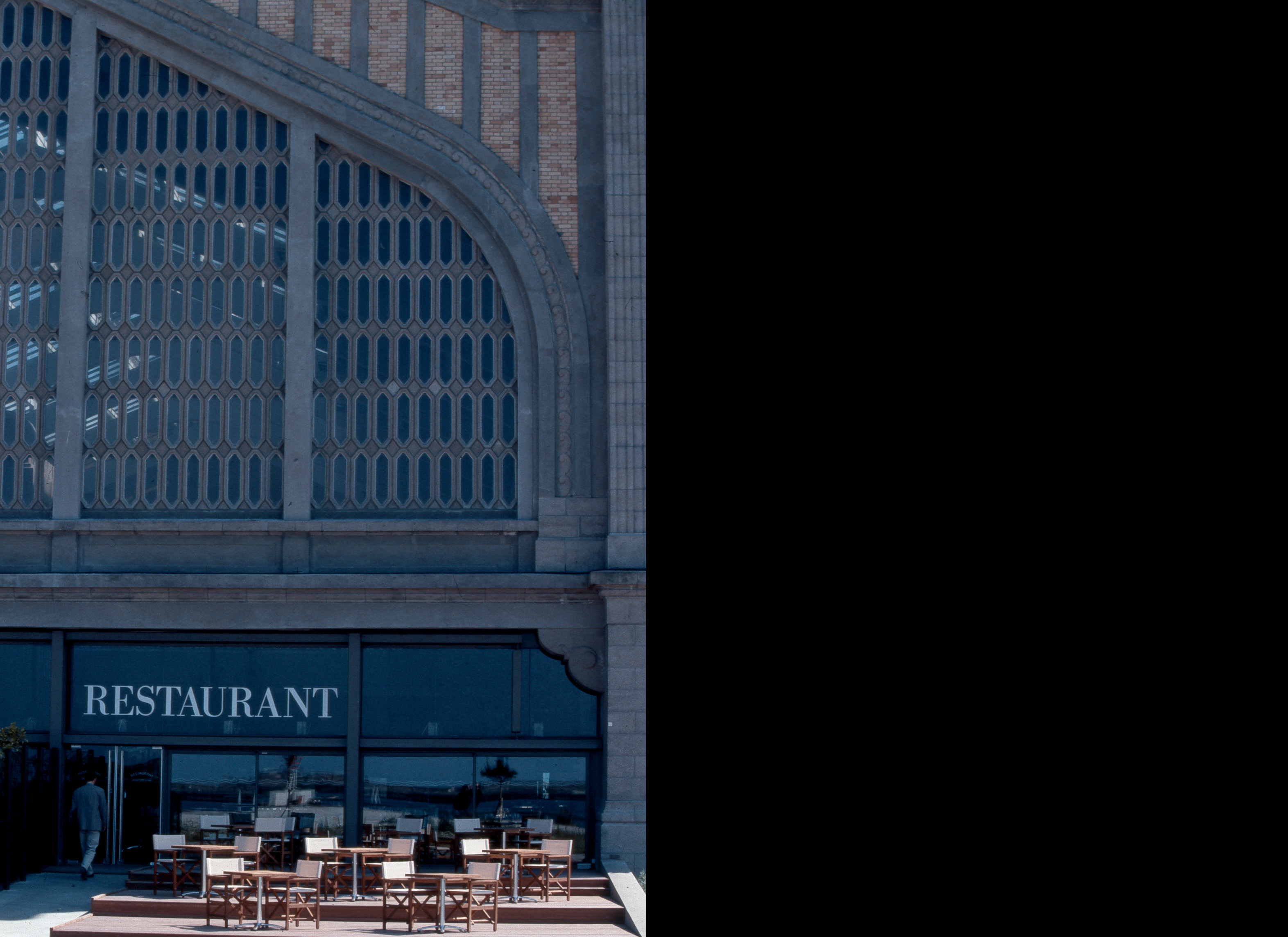 As part of its role as manager of the project as a whole, Studio Milou Architecture was responsible for the design for the conversion of the Redoutable submarine at the Gare maritime site.

This included the following:

• Design of the urban area surrounding the Redoutable on the Gare maritime jetty;

• Project management of the dock in the jetty area;

• Architectural coordination for lifting the Redoutable into dry dock;

• Technical coordination for the opening of the Redoutable to the public;

• Detailed technical coordination of the visitor itinerary at the Redoutable;

• Architectural and design coordination of work to convert the submarine undertaken by the DCN.

The initial design work was undertaken by Studio Milou Architecture on the basis of a plan drawn up by Jacques Lichnerovitz and Marianne Barzilay. According to this plan, the visitor would move through a submarine at rest, recently left by its crew, with all its equipment apparently in working order. 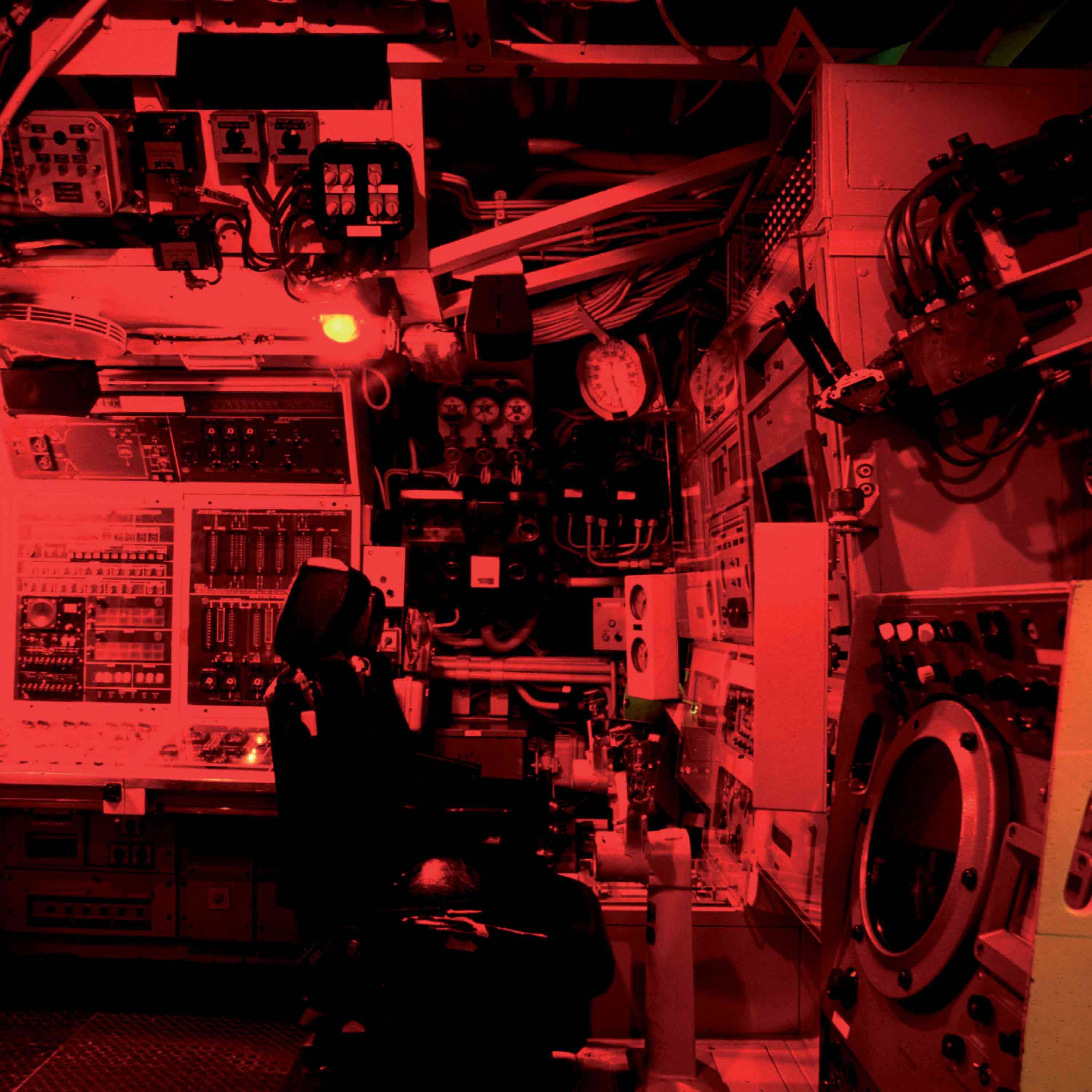 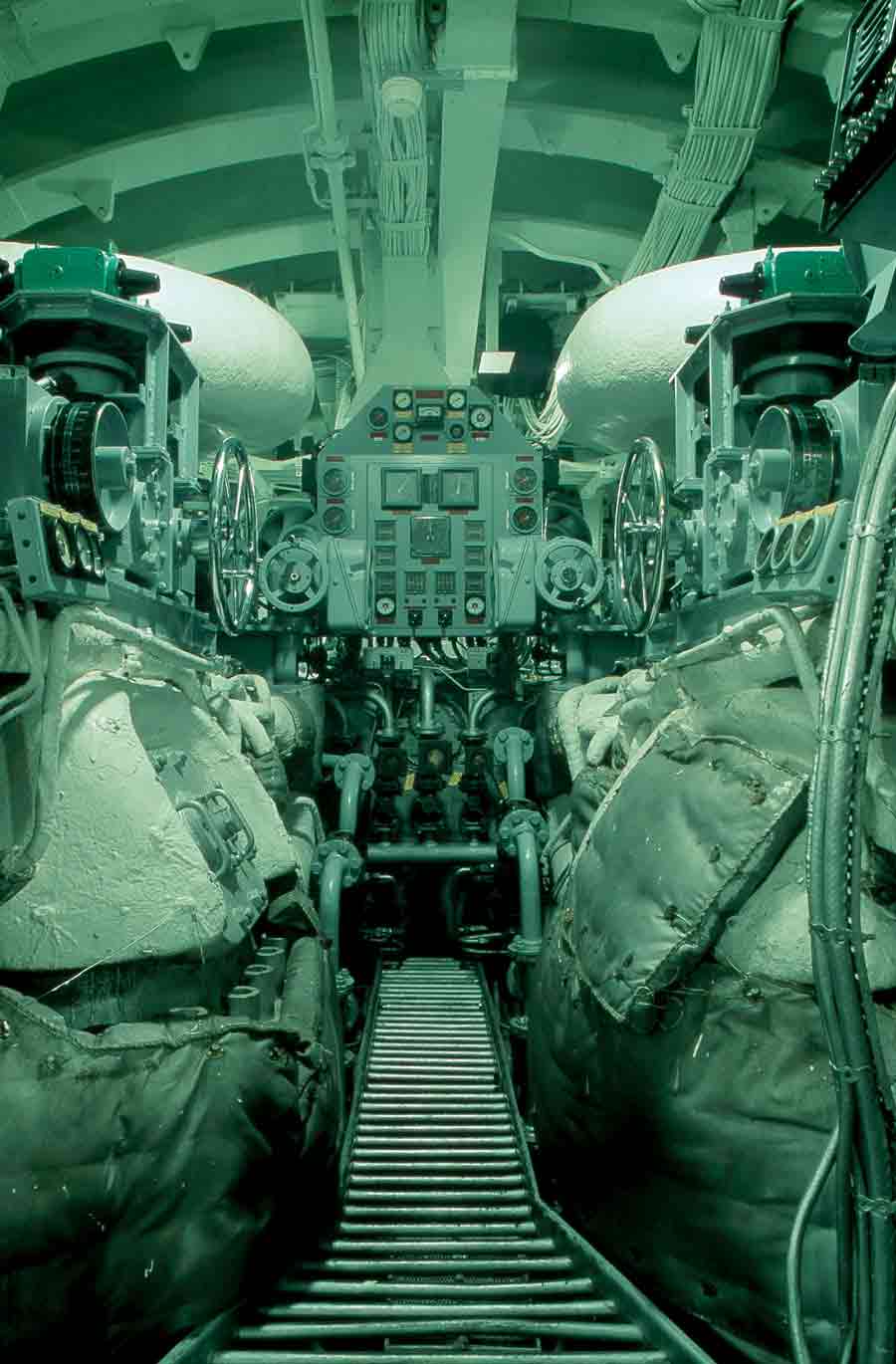 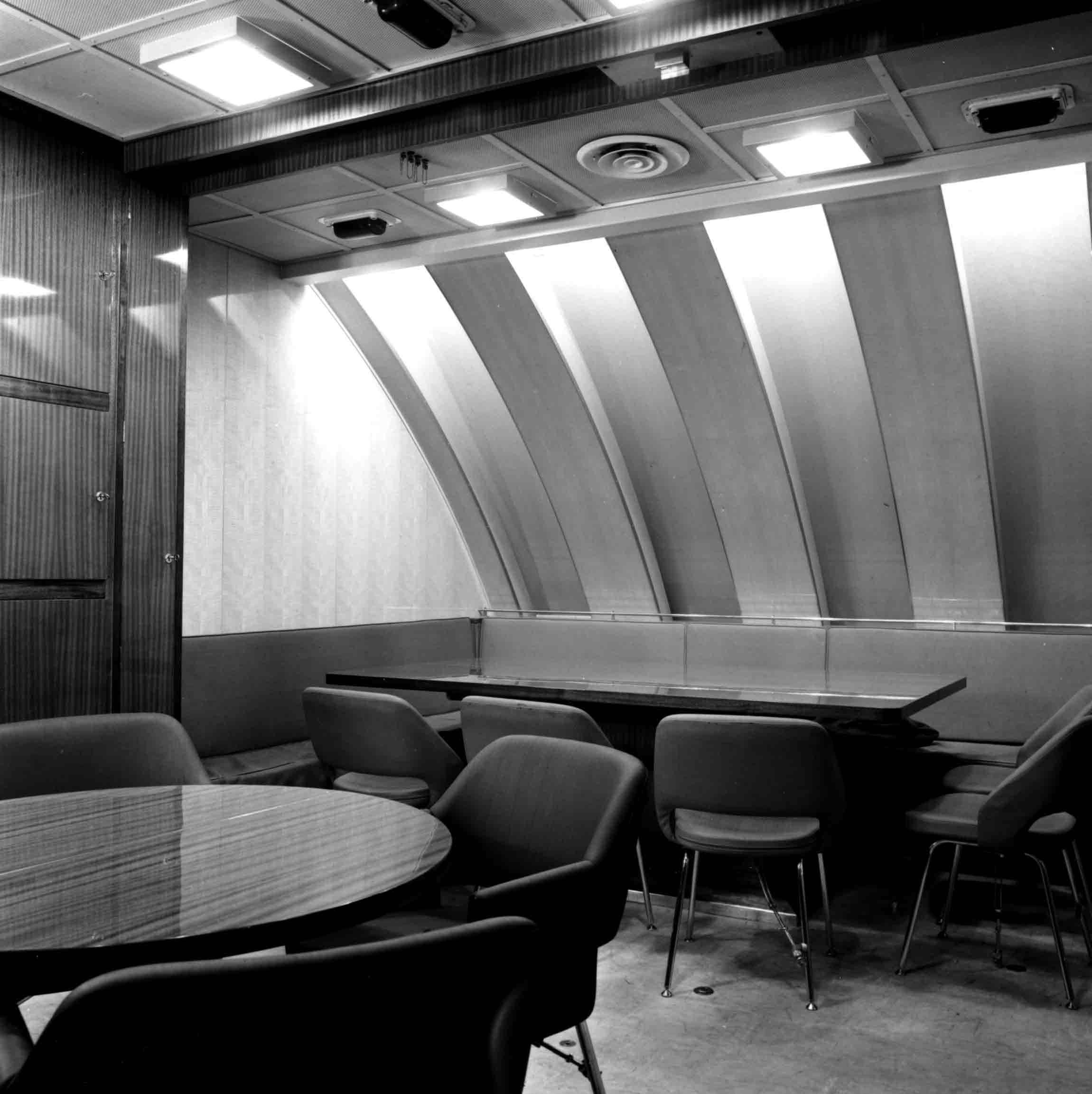