The Place de la Brèche project in Niort posed the problem of how to design large public spaces in the heart of urban centres. The contracting authority for this type of project undertakes consultation exercises with members of the local community in order that their views may be taken into account. In Niort, the mayor, Bernard Bellec, and his successor, Alain Baudin,went beyond the formal consultation procedures usually carried out for such projects, and requested the setting up of an exhibition, the holding of public workshops and presentations, and the carrying out of public-opinion surveys. Moreover, public debate also took place in the local press, fed by local political divisions. This public debate revealed two main points of view : • A demand from commercial stakeholders for more urban density and for greater numbers of shoppers, often associated with confidence in the project underway; • A demand from a section of the inhabitants of the district for more calm, less noise and more green spaces, often associated with mistrust of the project underway. We allowed the project to develop towards more green spaces and reduced the impact in it of the various constructions planned, such as the glasshouses and kiosks. In this respect, the design attempted to conceal itself, only obviously intervening at strategic points in the square as the green spaces progressively took over. 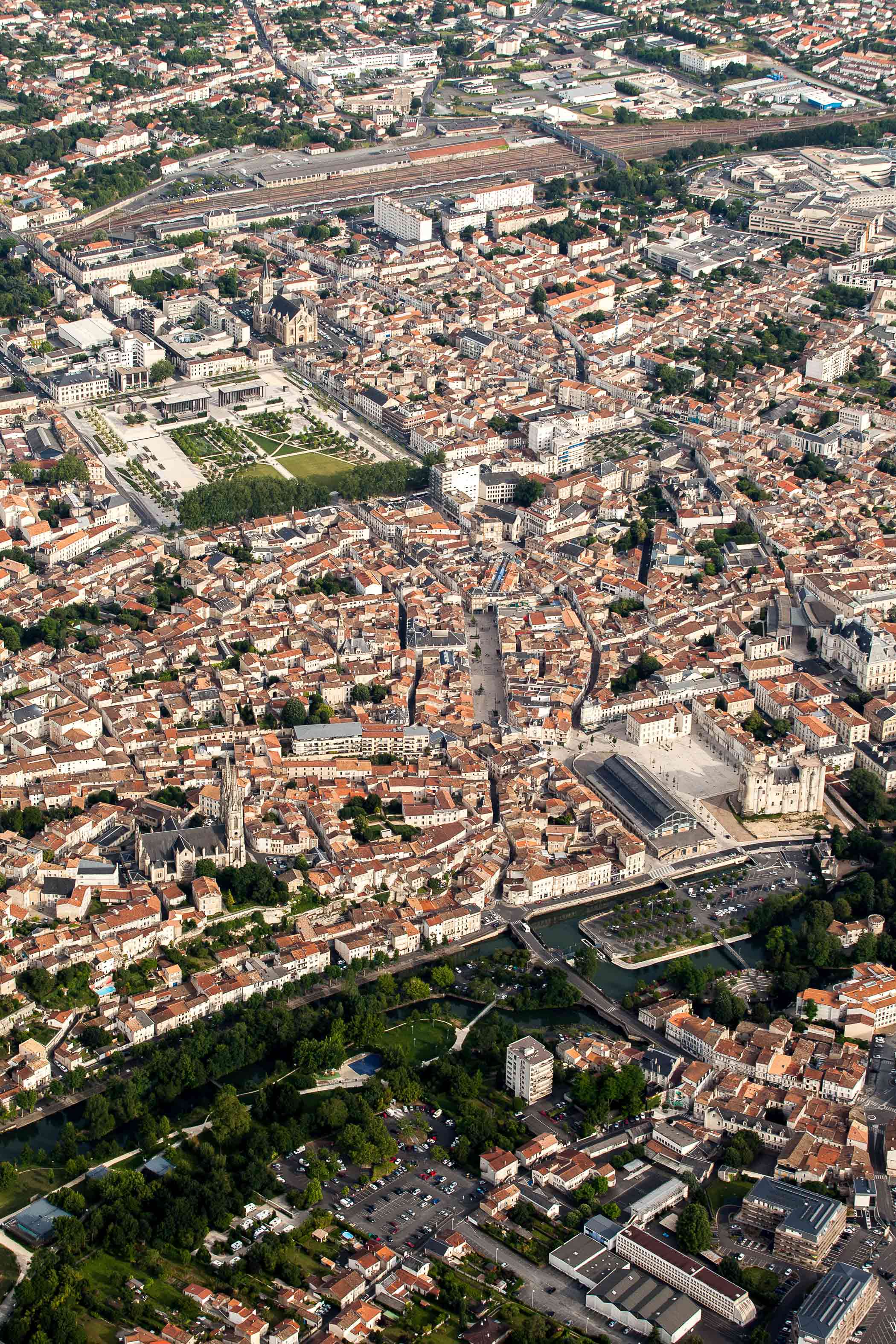 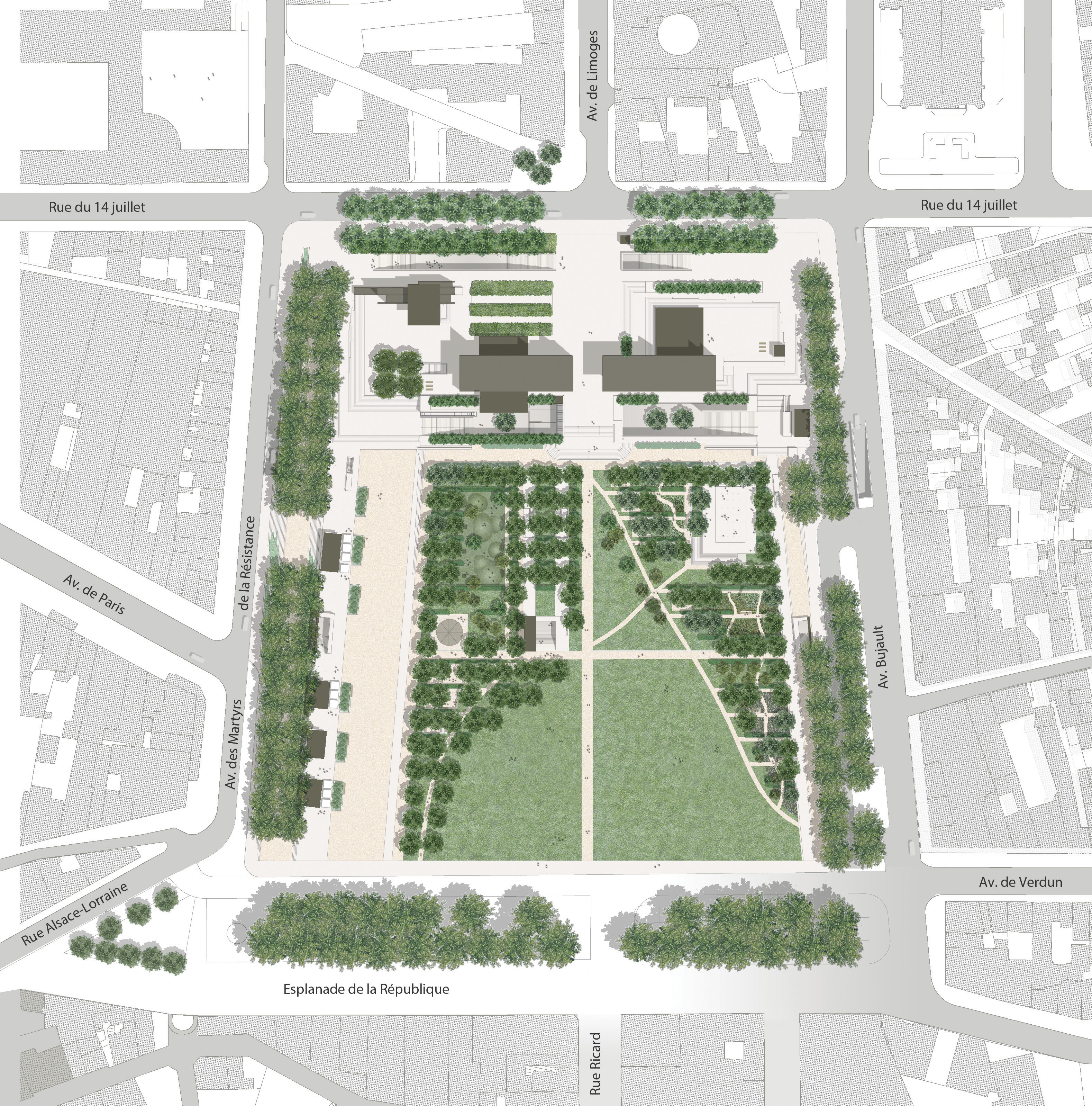 Redesign of the main square

For several years the town of Niort has tried to reduce the amount of parking space in order slowly to free up the area and allow the Place de la Brèche to play its proper role as the main square of the new Niort conurbation. Many studies have been carried out, but none have succeeded, and it was only in 2002 that Bernard Bellec, the then mayor of Niort, launched a study for a major project to convert the square. The first phase of this study, worked on by Hervé Beaudoin, Gérard Lancereau and Studio Milou Architecture, led to the formulation by the local authorities of a programme of work for the future square. This programme includes the following components: • An underground garage with 1,200 parking places; • A multiplex cinema with 12 cinemas; • An exhibition gallery of 1,500 m2; • A transport centre serving the local area; • A large, four hectare garden; • Various facilities, including cafés and restaurants. In the architectural design, the larger constructions demanded by the brief – the parking area, cinemas and cultural facilities – were to be located beneath a large landscaped garden in which planted spaces and architectural constructions of wood, steel and glass would be carefully brought together. As a result of a process of consultation, studioMilou architecture was able to reduce the impact of the architectural constructions to a minimum and to increase the planted areas, the design being part of the wider renovation of the site and in line with the street plan of the city centre. As of 2013, the Place de la Brèche consists of : 4.15 hectares of pedestrian space, including The Esplanade de la Brèche • A 12-screen cinema complex • A 1,500 m2 multi-use space • A brasserie type restaurant • A 530-space underground parking area The Gardens de la Brèche • Two hectares of planted space Fairground walk and refreshment kiosks • 2,300 m2 of multi-use public space that can be used for commercial or leisure purposes The terminal area Bus terminal 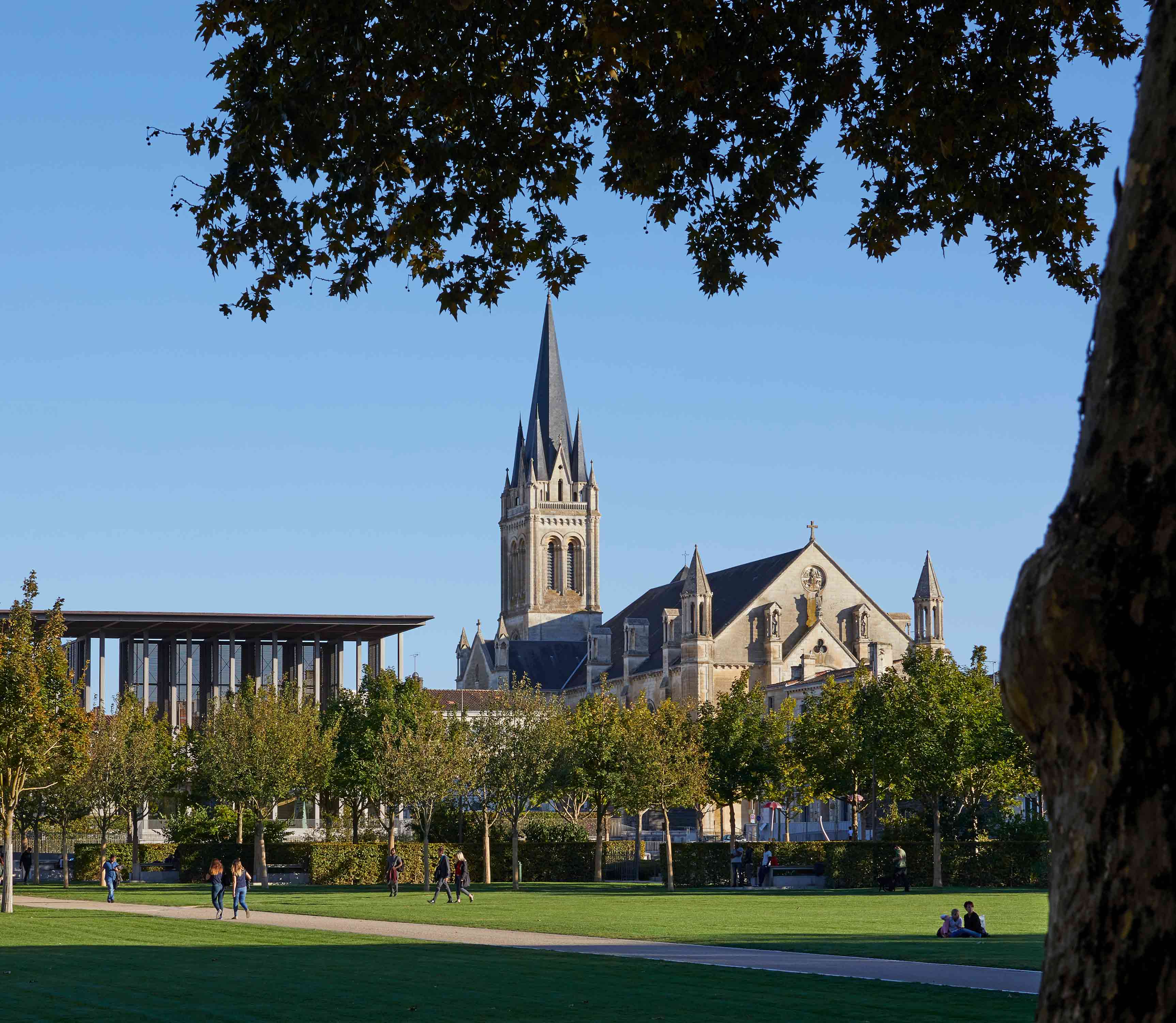 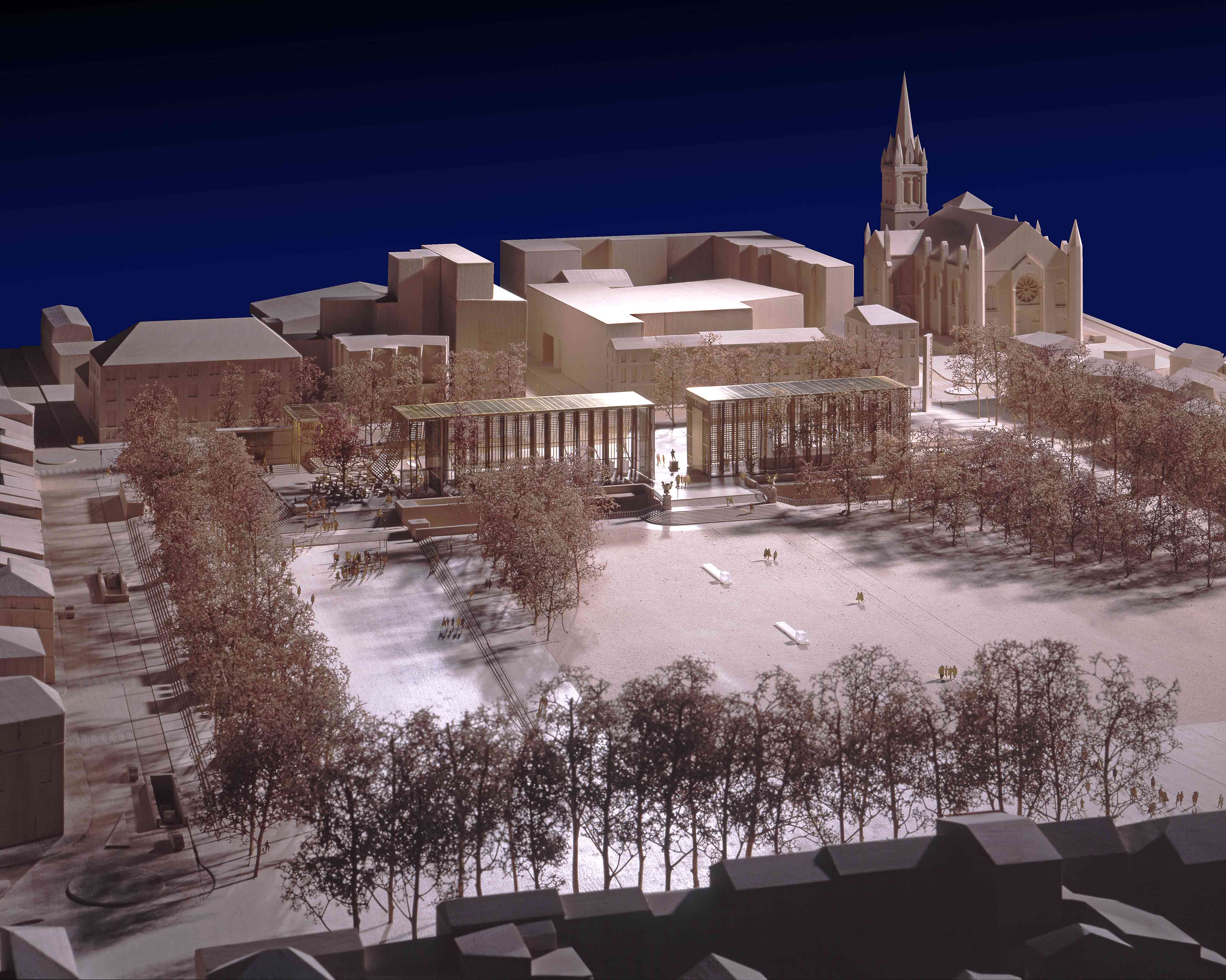 Model of the project 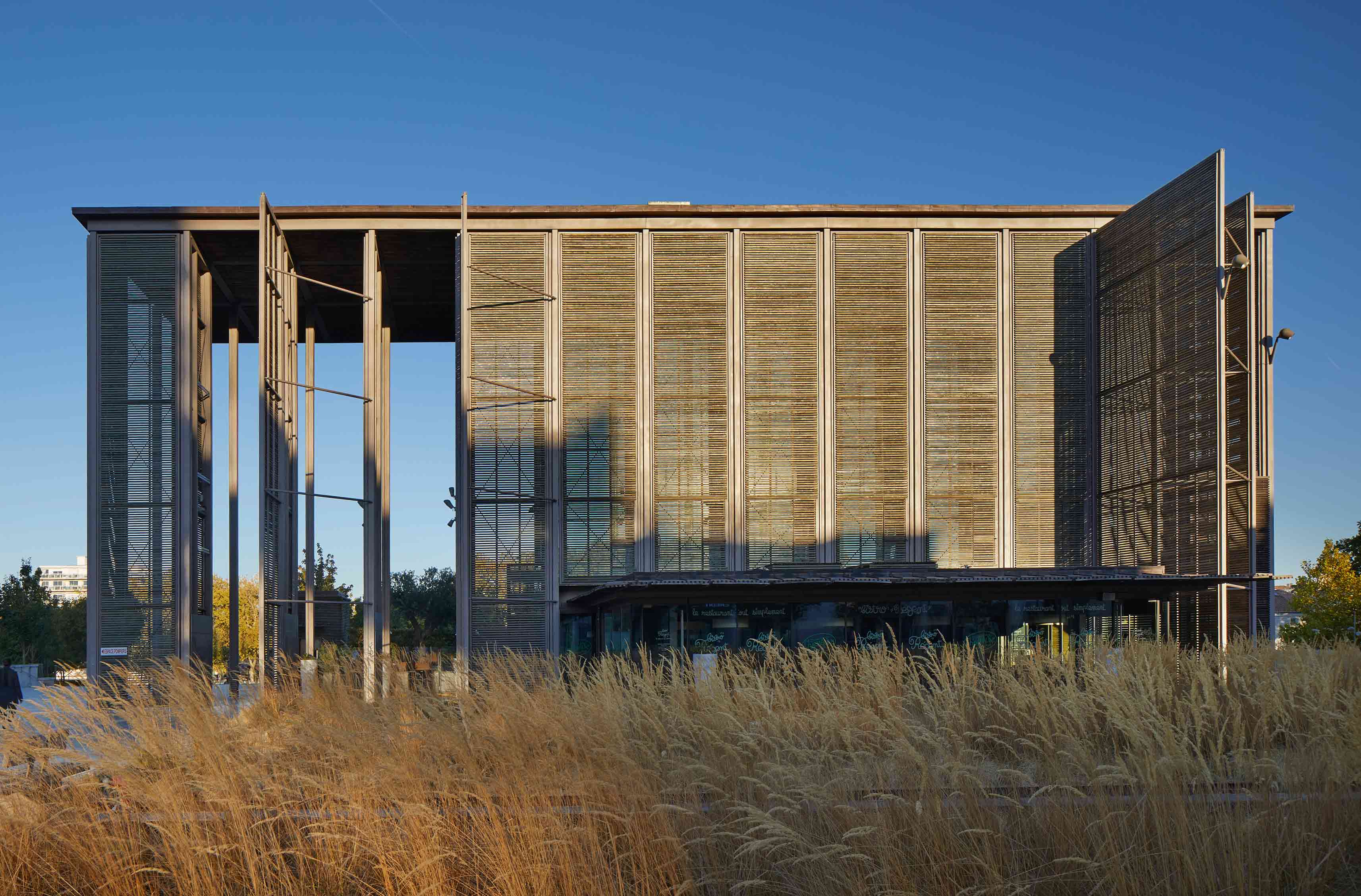 The two glass buildings seen from the Avenue de Limoges Facade in titanium timber at the forecourt 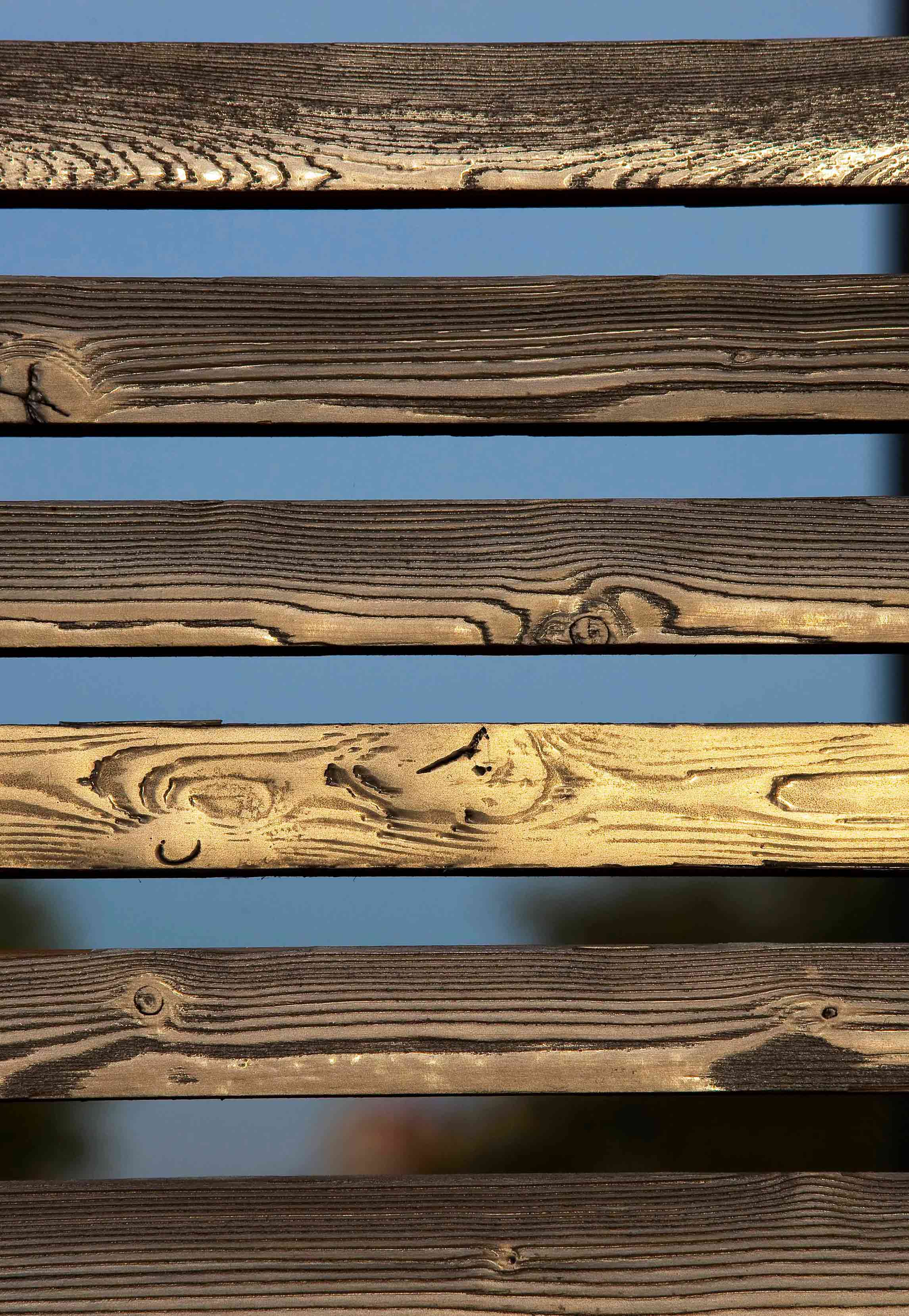 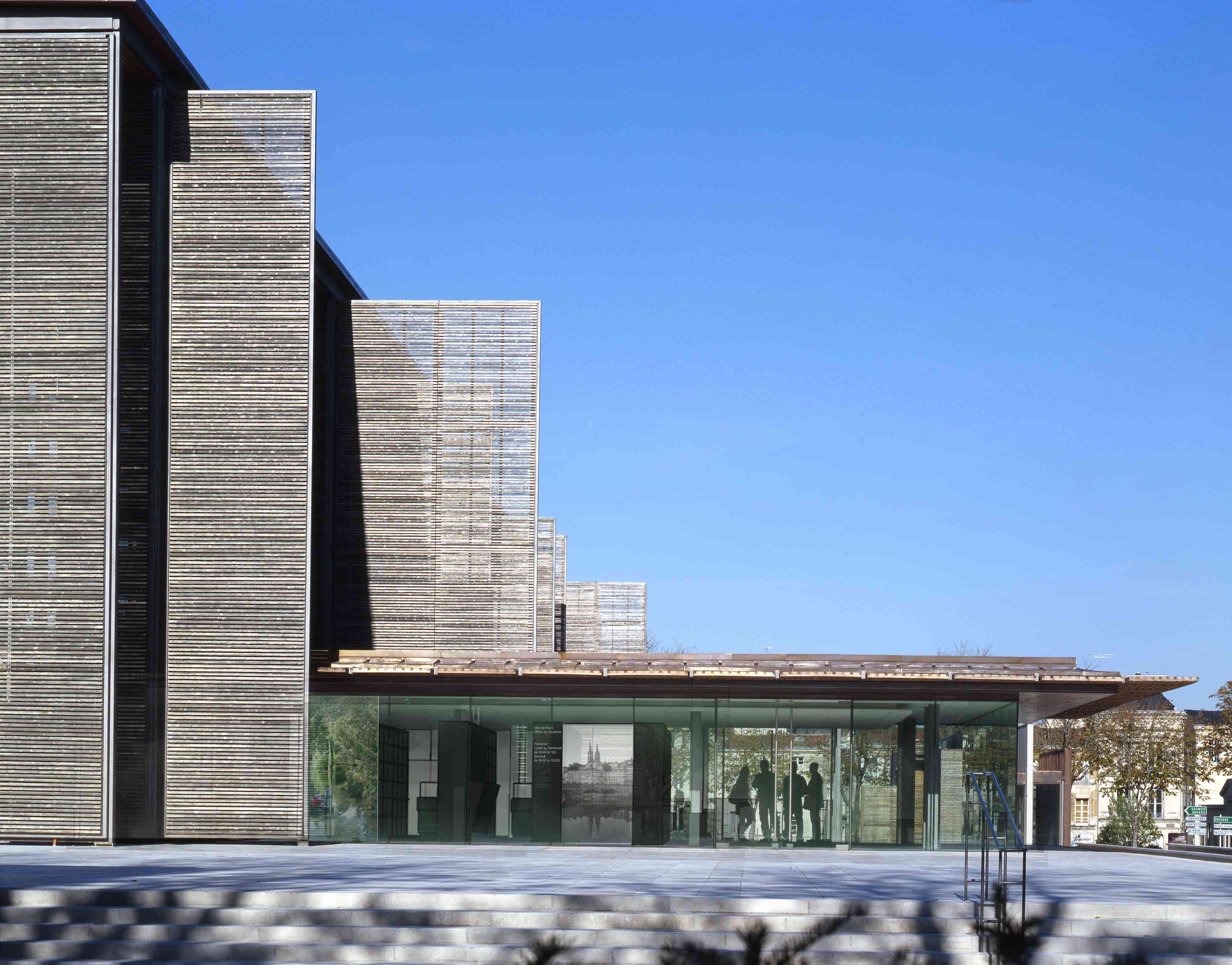 Beneath, and around a garden and heritage site

The status of Place de la Brèche as a national heritage site meant that studioMilou was obliged to overcome innumerable design challenges to integrate large public amenities in such a way that they would not undermine the site’s integrity and visual unity. A major challenge, for example, was to locate the 12 cinemas underground, beneath La Brèche; something that could be achieved only by constructing a large passageway below ground level which could be classified as a road, enable a secure entrance to the cinemas and ensure sufficient access/exit routes to meet safety regulations. Similarly, the significant underground parking facilities were built underground further ensuring the uninterrupted space of the garden while meeting one of the civic and commercial communities’ key requests that the parking remain onsite. 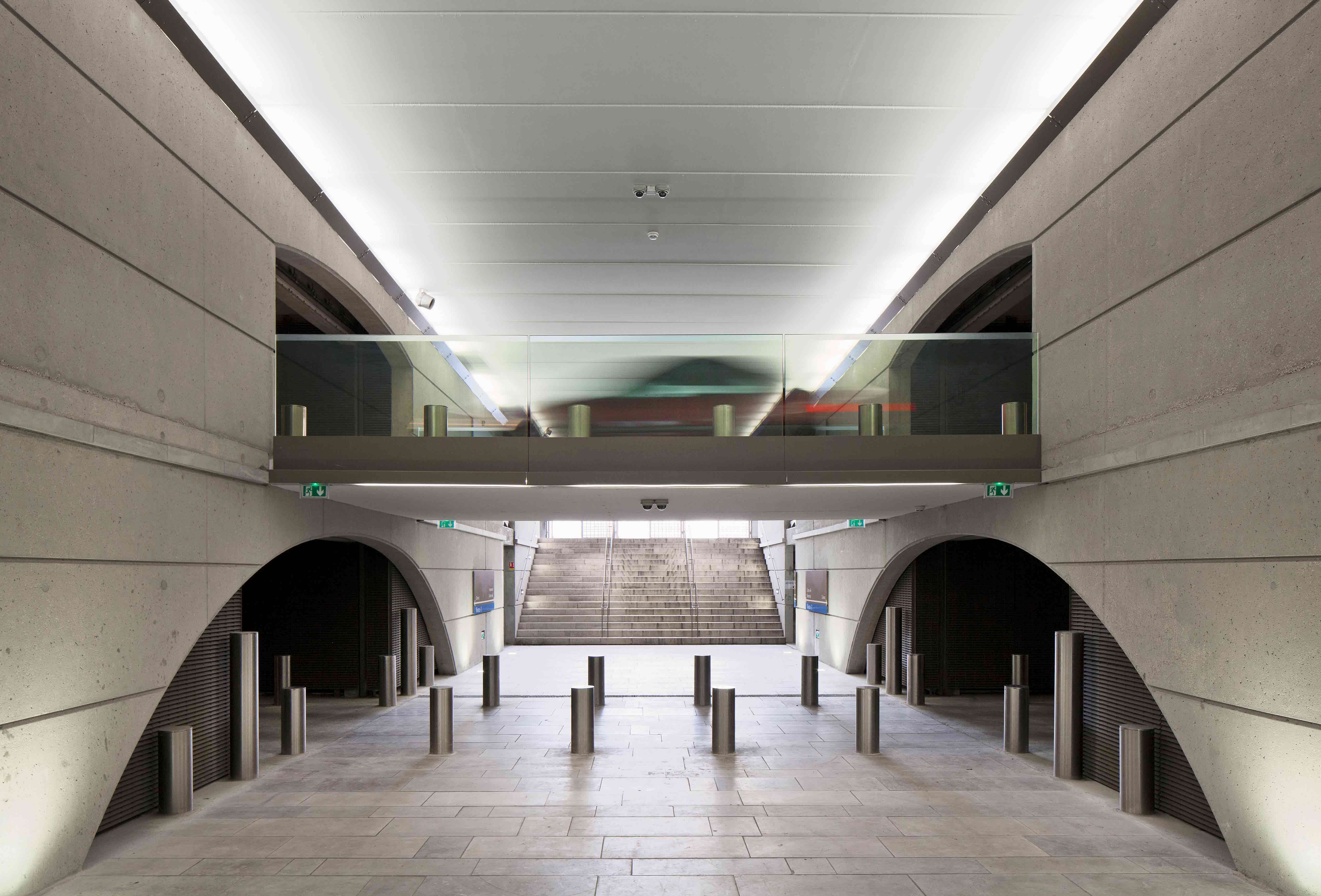 Pedestrian circulation in the parking area 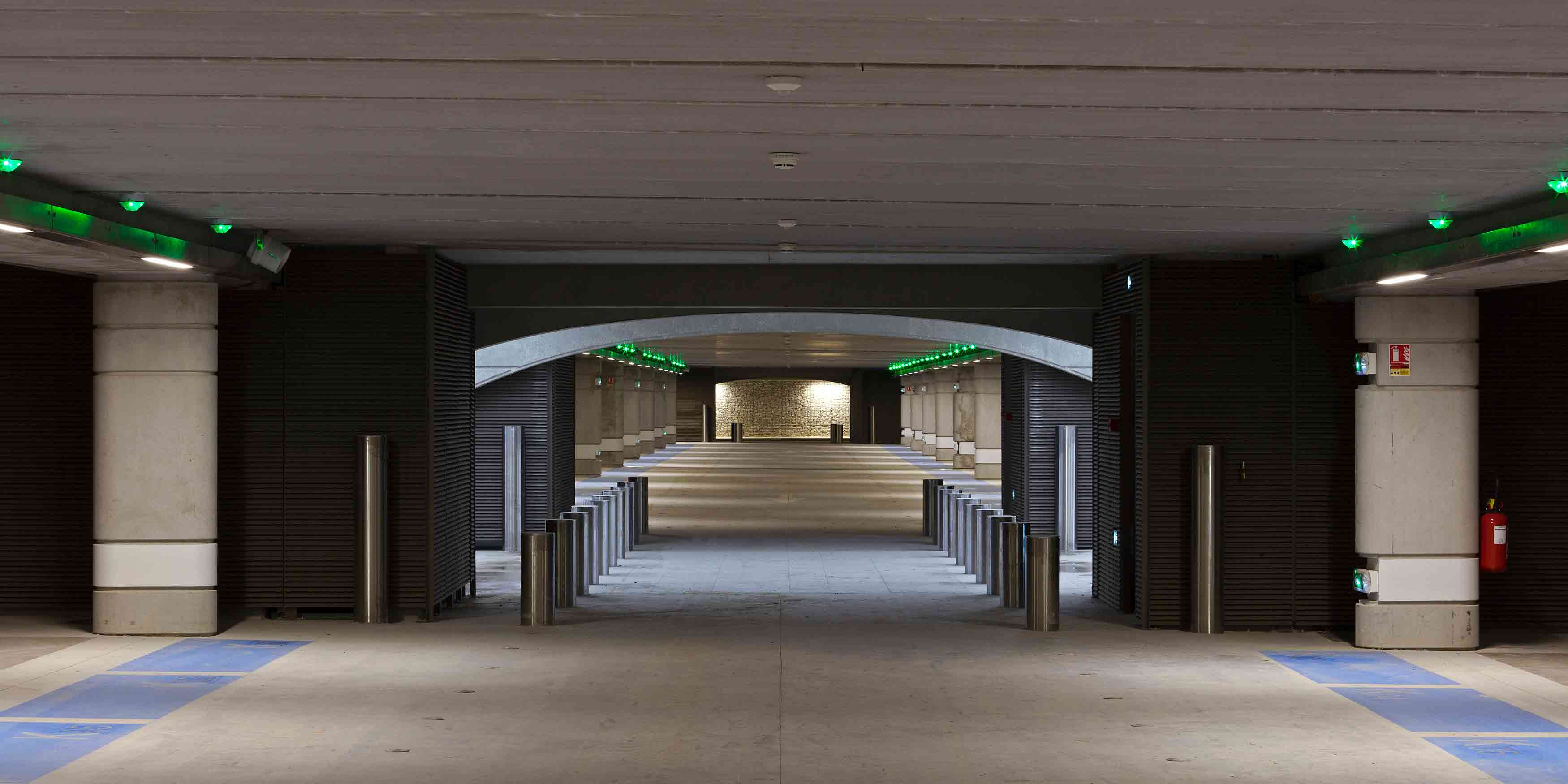 Vehicular circulation in the underground carpark 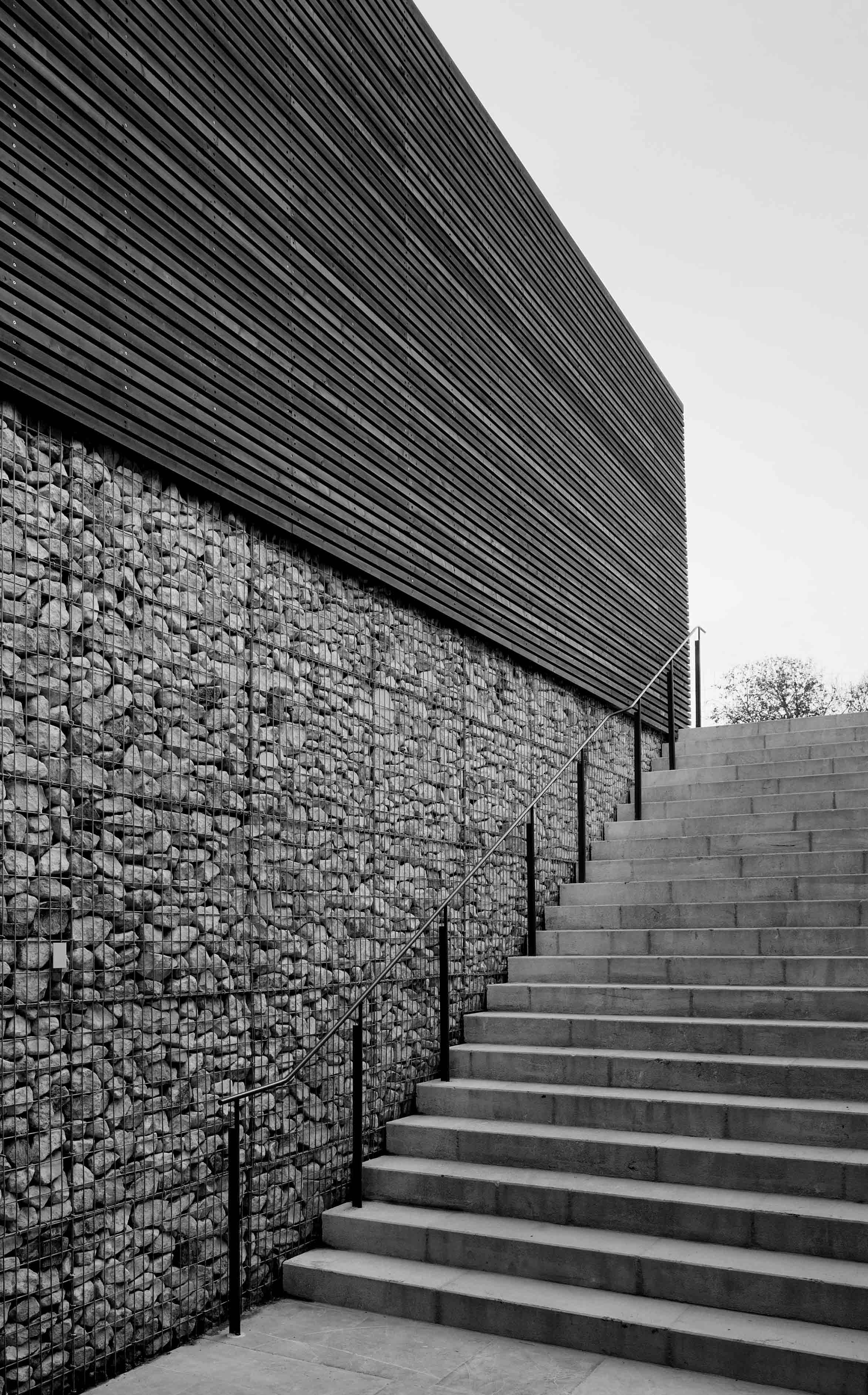 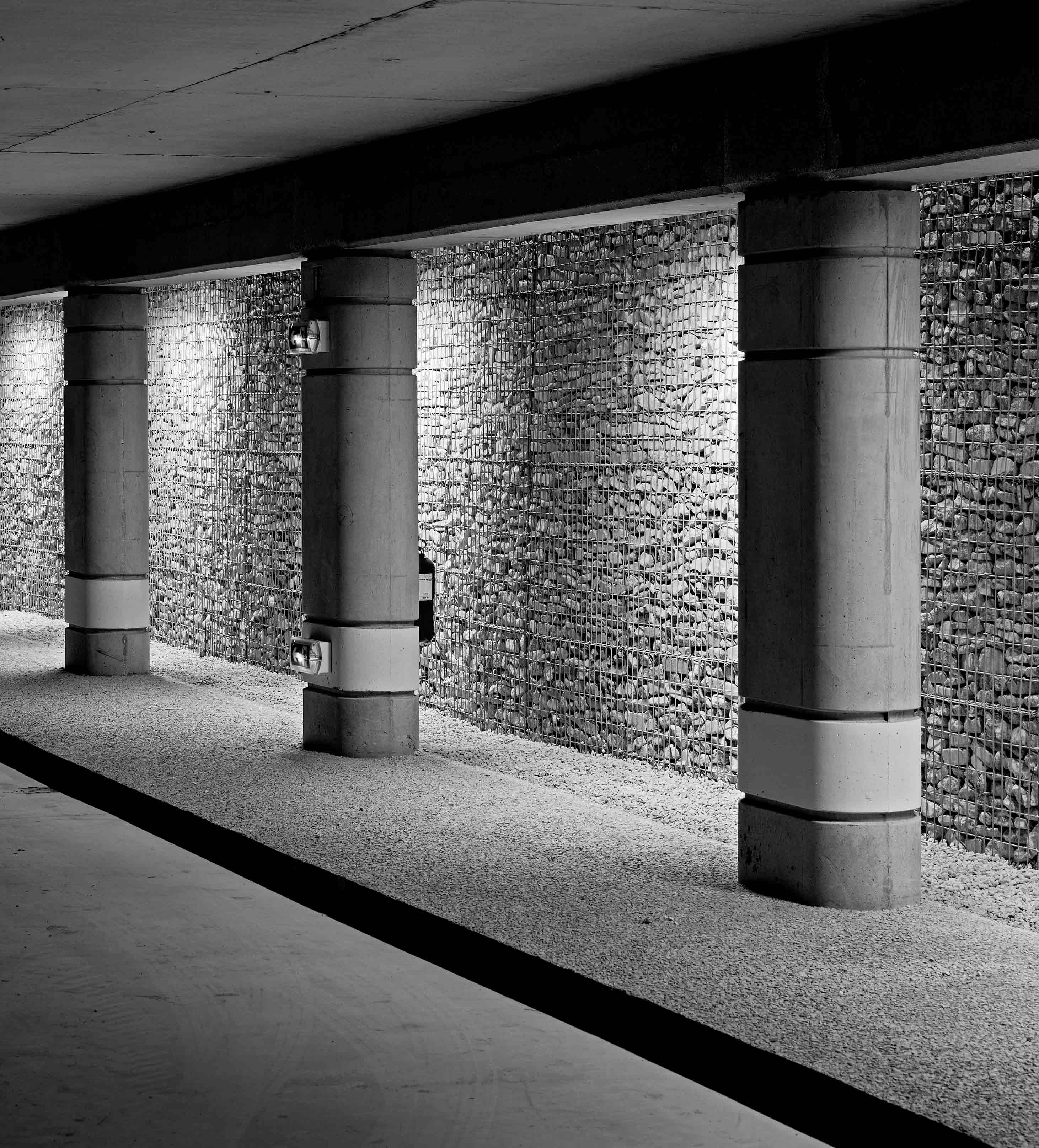 Respecting and revitalising a regional city

Among the many factors contributing to the progressive decline of city centres in many regional areas of France has been the growth of industrial centres on the outskirts of towns and cities, offering grand surface stores for household and home maintenance needs. studioMilou viewed Place de la Brèche as an opportunity to breathe new life into the centre of Niort, to attract its inhabitants and surrounding communities towards the Brèche with its marriage of beautiful landscaping, entertainment, dining and practical facilities. Born in Niort, and raised between the nearby town of Celles-sur-Belle and Paris, Jean Francios’ personal attachment to the town was reflected in his determination ‘to give to the city what any project in Paris would demand of the architects; a beautiful place of the highest design by any standards’. studioMilou set about working on La Brèche to give back to Niort, a historic city boasting wide avenues, elegant traditional architecture and a dynamic local population, including the local cafes and other business seeing a growing clientele, a place of elegance able to attract visitors from the region and further afield, and to compete with or surpass comparable squares worldwide. 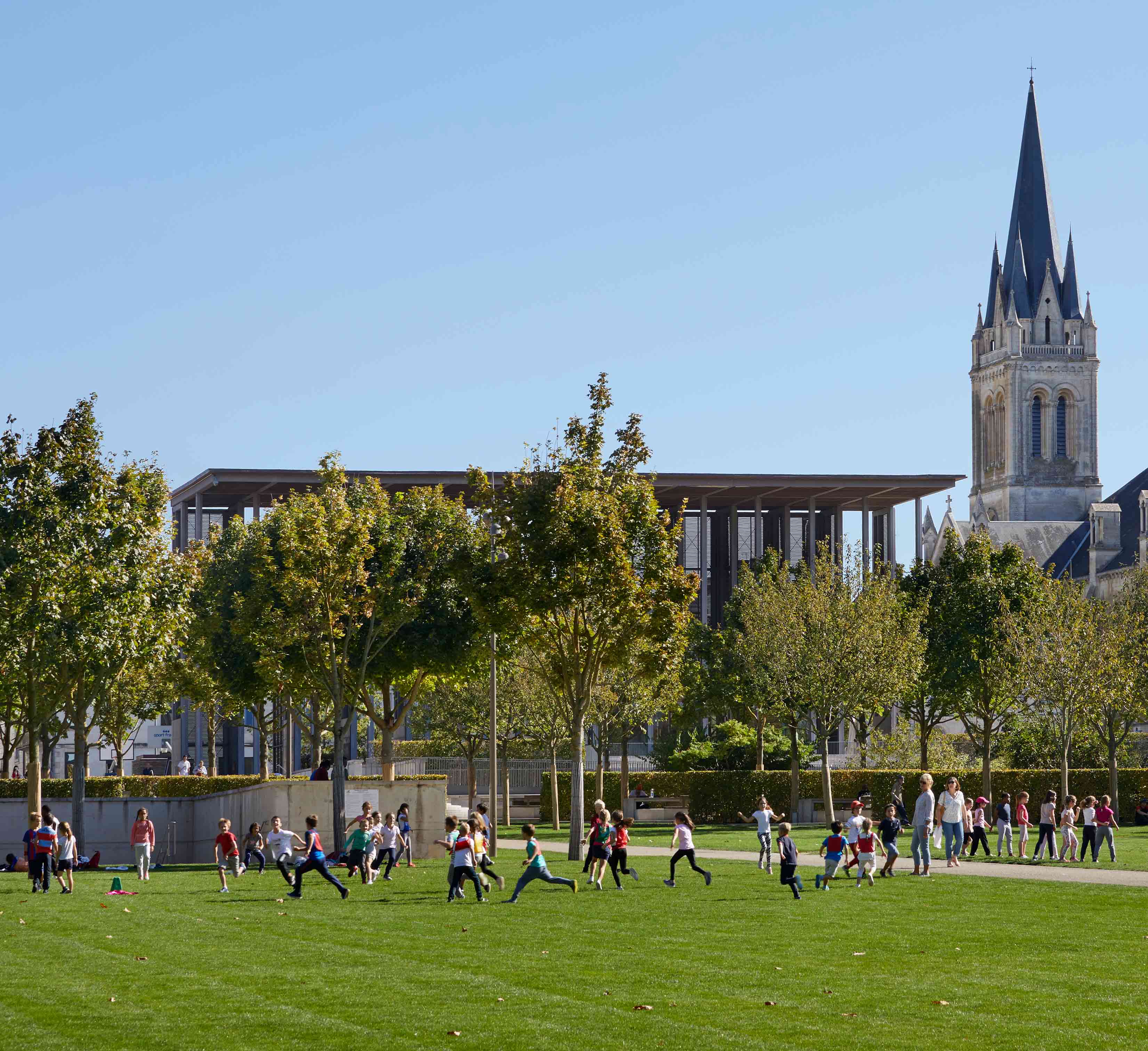 The garden and St Hilaire Church 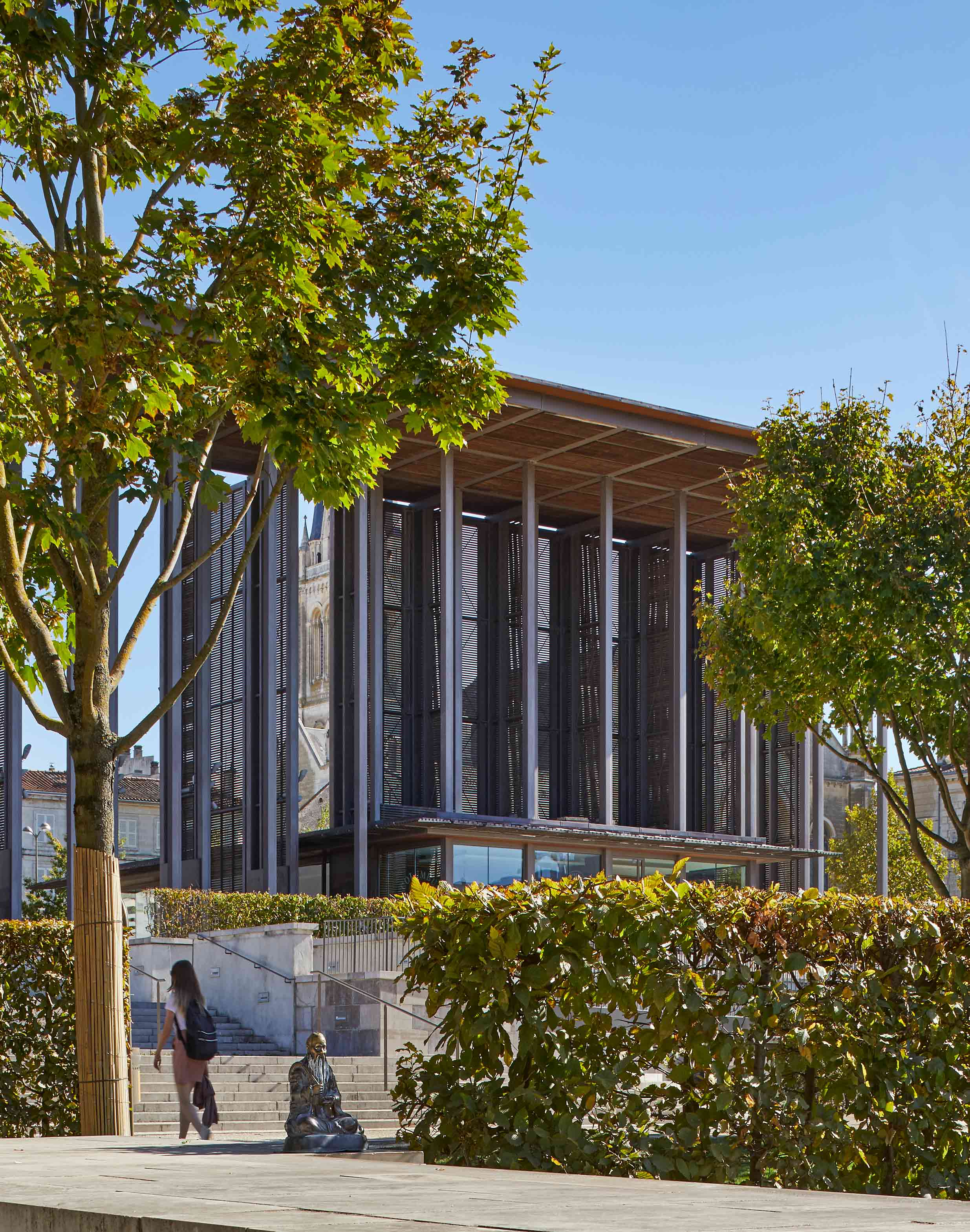 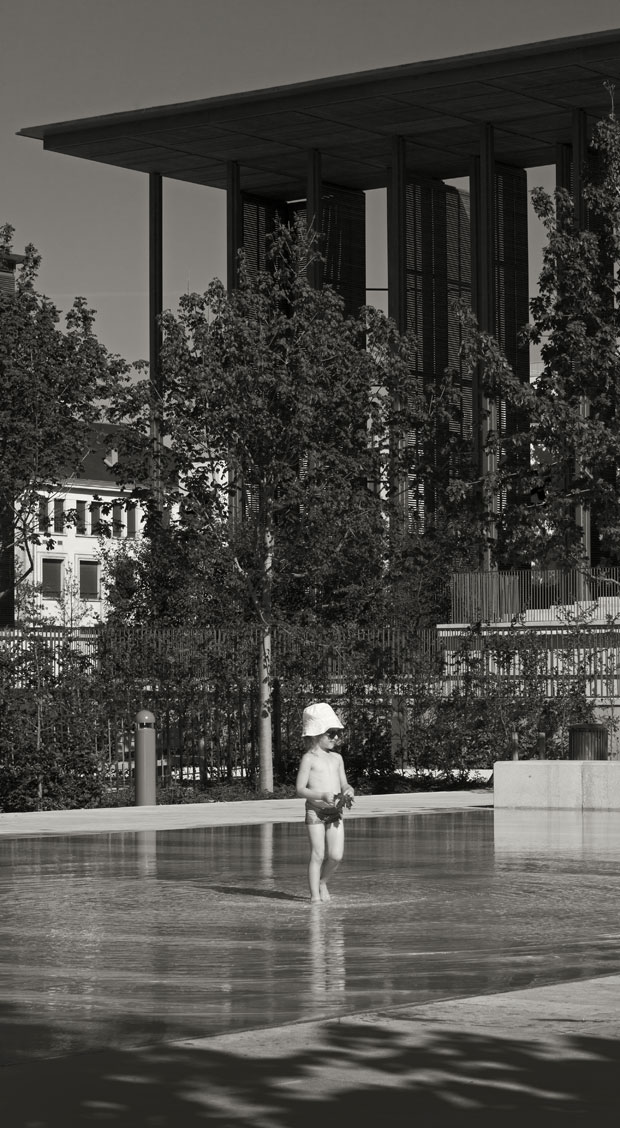