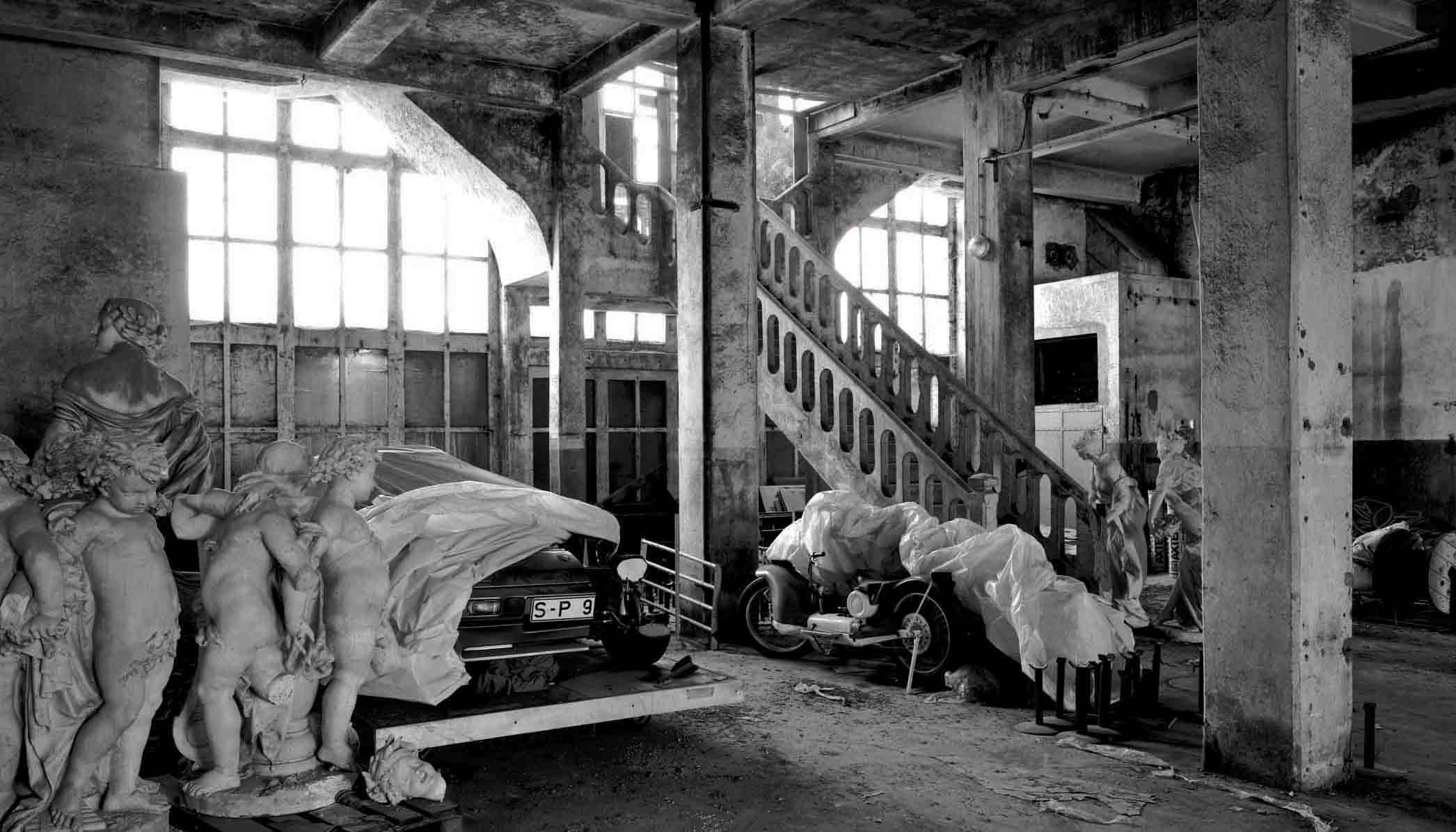 A new museum in the city

The Mulhouse Automobile Museum was built to preserve and present the famous car collection of the Schlumpf brothers. The museum presents a remarkable collection of exceptional cars, including a series of Bugatti cars that are among the most important still intact in the world today. Responsibility for the site and for the collection was assigned to the company Culture Espace in 1998 by the association managing the museum, and in 2000 Culture Espace carried out work to develop the large exhibition hall.

To allow the better management of the museum over the long term, the museum’s partners (the state, region and département) decided to reconstruct the museum in phases.

The architectural part of this plan included the following components:

• A new visitor itinerary showing the development of the cars in the collection;

The project includes the rehabilitation of the existing buildings and surrounds, while fully respecting their original character, as well as two major innovations: a bridge over the canal leading towards a newly designed and spectacular entrance area; and the opening of a large room on an itinerary that will allow the development of the cars in the collection to be seen. 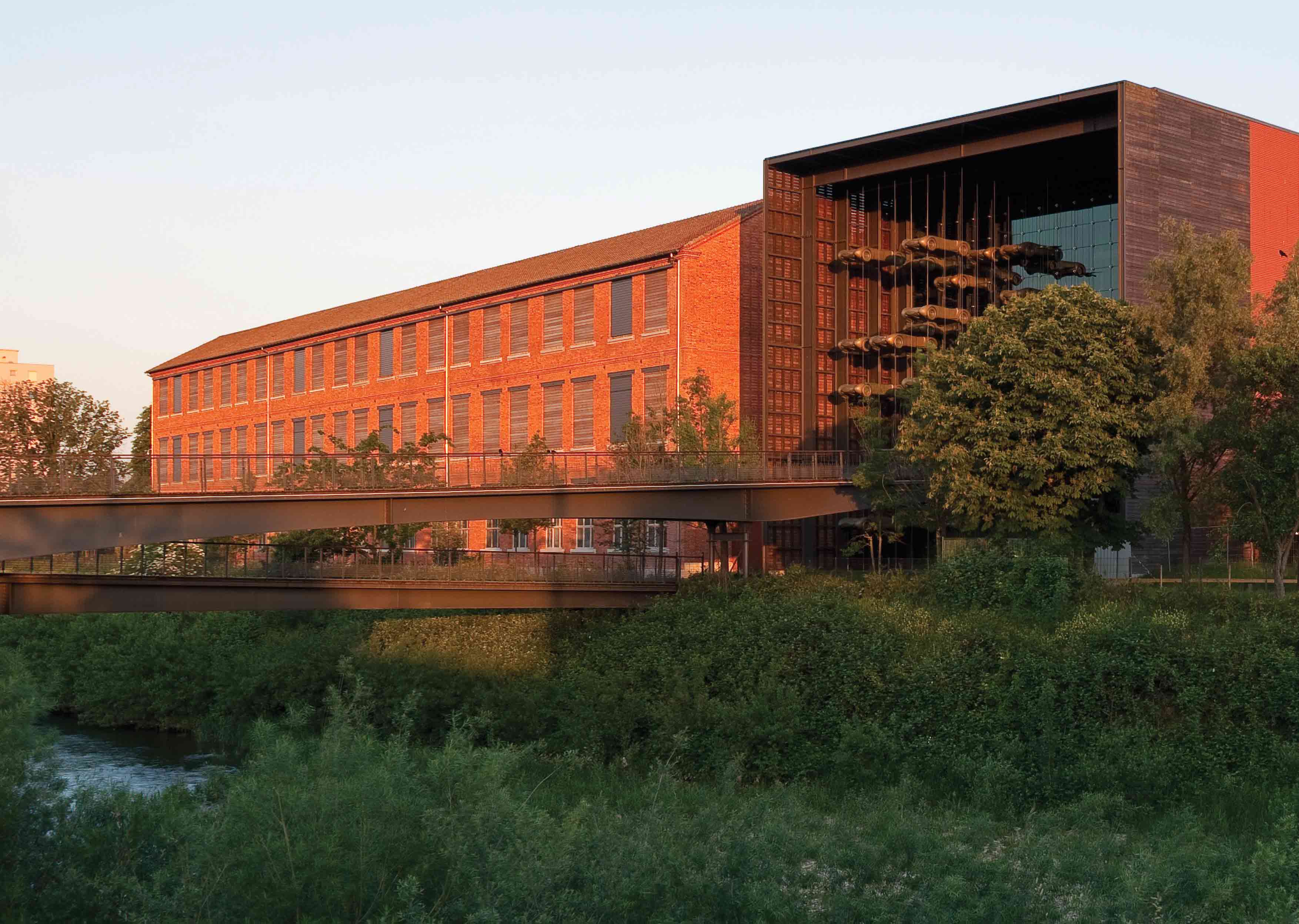 entrance area and walkway across the canal 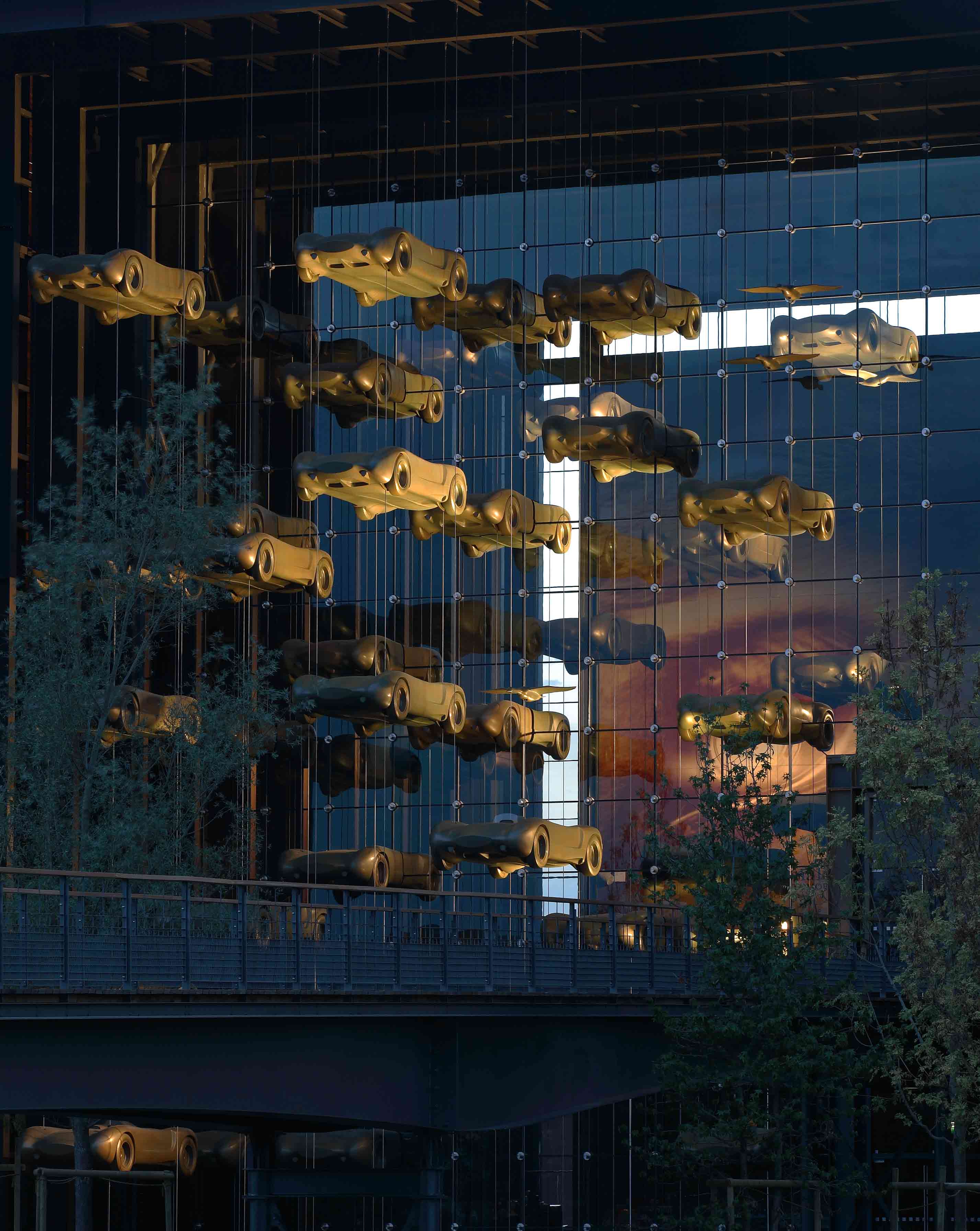 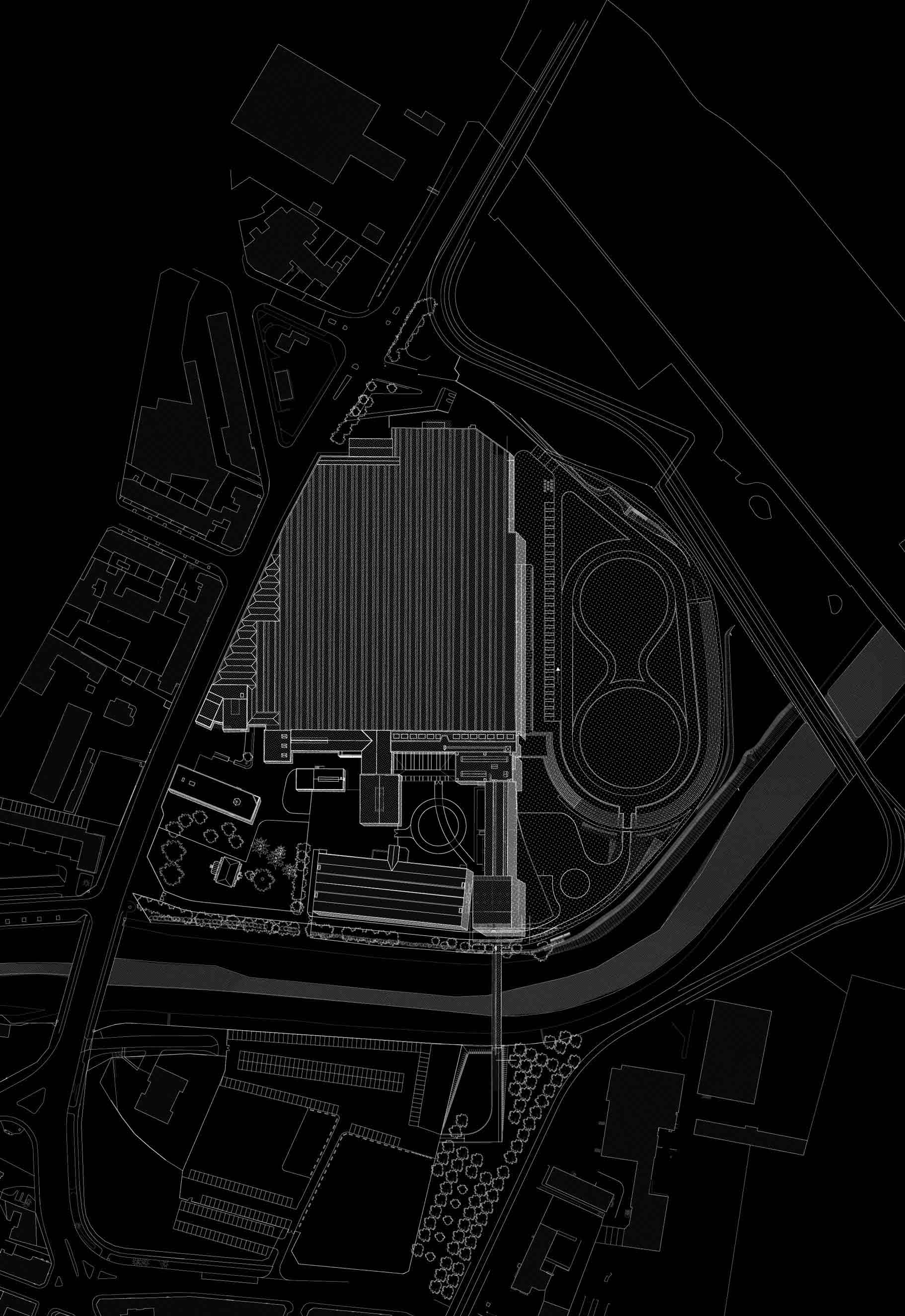 plan of the site 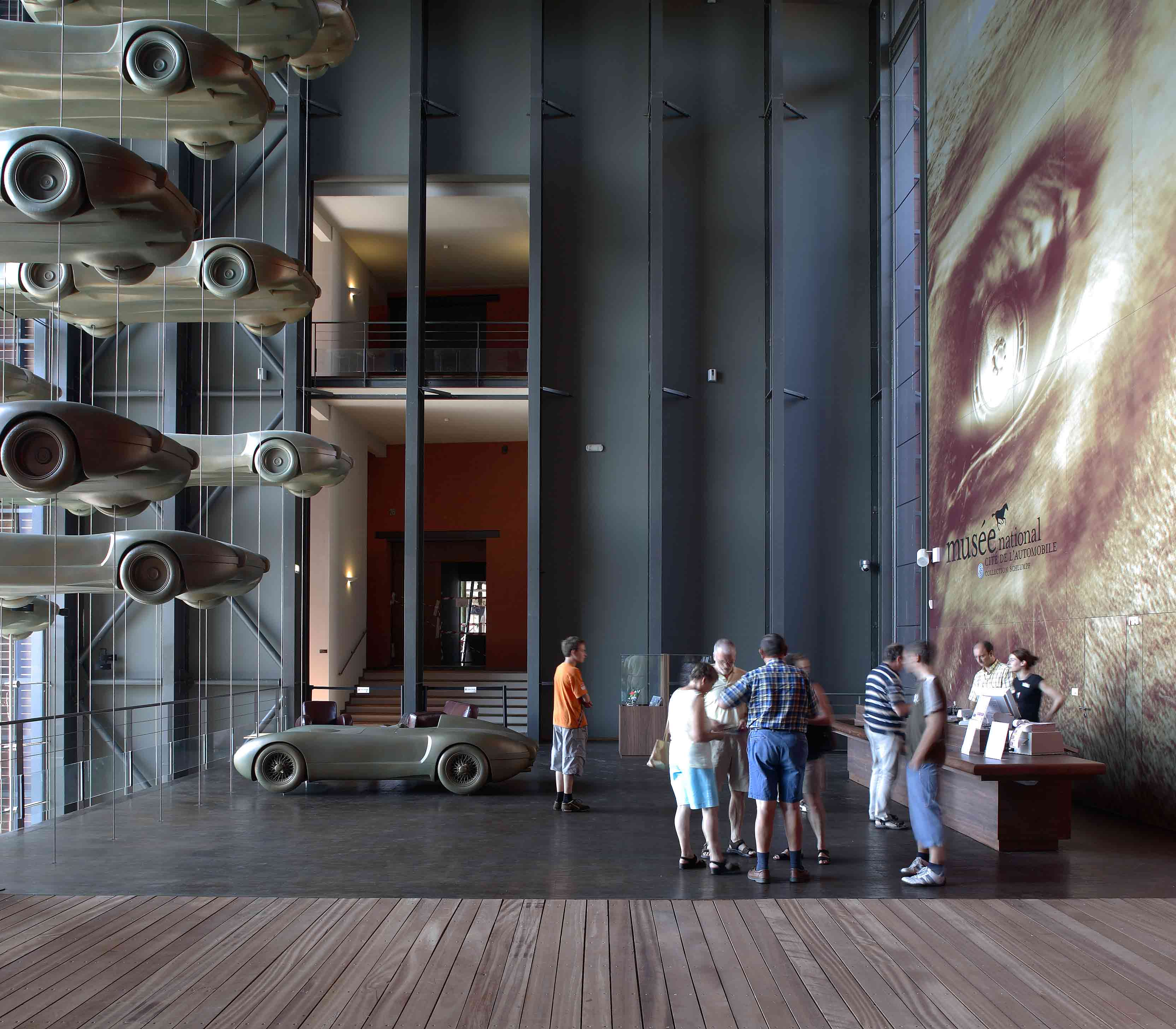 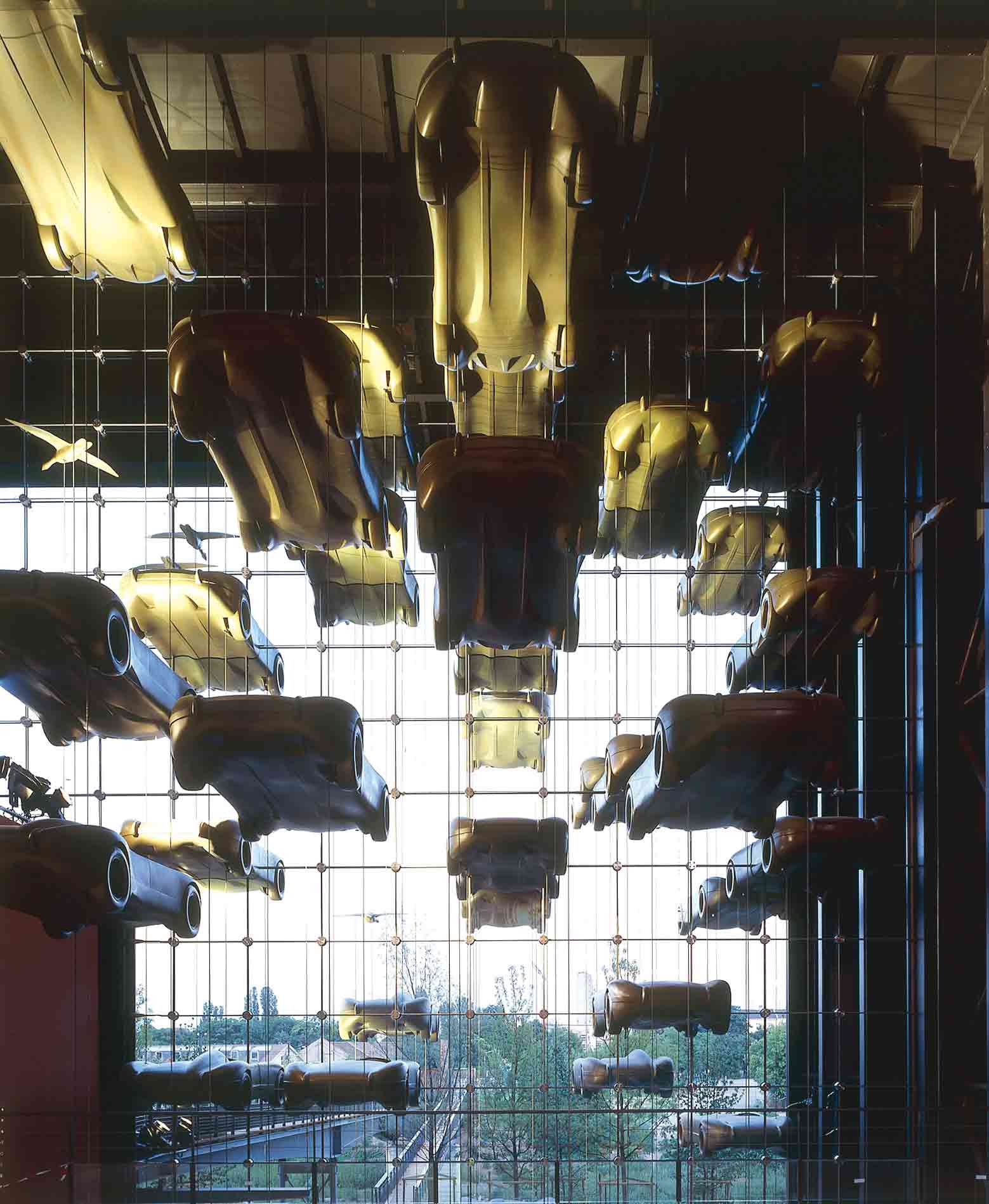 the town seen from the entrance area

A walk in an industrial landscape

The Mulhouse Automobile Museum occupies the site of the former Heilman, Koechlin and Kuynel wool mill, which was built in 1880.

The covered area of this industrial site approaches 35,000m2.The restructuring project for the Automobile Museum planned for an operational budget, all phases taken together, of 22,000,000 Euros, excluding tax, this sum allowing the project as a whole to devote 731 Euros per square metre.

In order to carry out the ambitions of the project in the context of this reduced budget, we proposed to work on two fronts: firstly, carefully targeted and limited work on the bridge, hall area, and the design details of the museum, and, secondly, minimal restoration work on the ensemble of the existing buildings.

The patina on the walls, and the marks that have accumulated on them of past industrial activities at the site, have a particular importance in the strategy to carry out minimal restoration on the ensemble of the site’s existing buildings.

This patina and the few marks that go with it contain information on the larger history of the site, as well as information on the various industrial processes once carried out there, such as dyeing, storage, steaming and carding. It contains information on the different forms of management used at the site from the security instructions written in German and French.

The simple messages written or inscribed into the walls also bear witness to this history. The project attempts to reconstruct this information through a visit to the site, as an additional documentary layer accompanying the museum itinerary and one that gives an historical dimension to this industrial site. The large area of the spaces open to the public has meant that certain areas have been left empty. In these areas various objects collected over 15 years (statues and furniture) could be presented to the public as examples of the passion for collecting that characterized the Schlumpf brothers.

The collection is arranged in this industrial landscape. The design of the project drew inspiration from the juxtaposition of the perfect finish of the objects on display and the raw character of the existing walls, emphasizing the refined lines of the objects in the collection (lacquer, chrome, etc.) through this contrast. Deploying these disarticulated mechanical components in this space encourages a play of forms that contributes to the pleasure of visiting the museum.

This play will be emphasized by interactive audiovisual systems that will enrich the visitor experience in a light-hearted way (provided by Studio Azzuro). 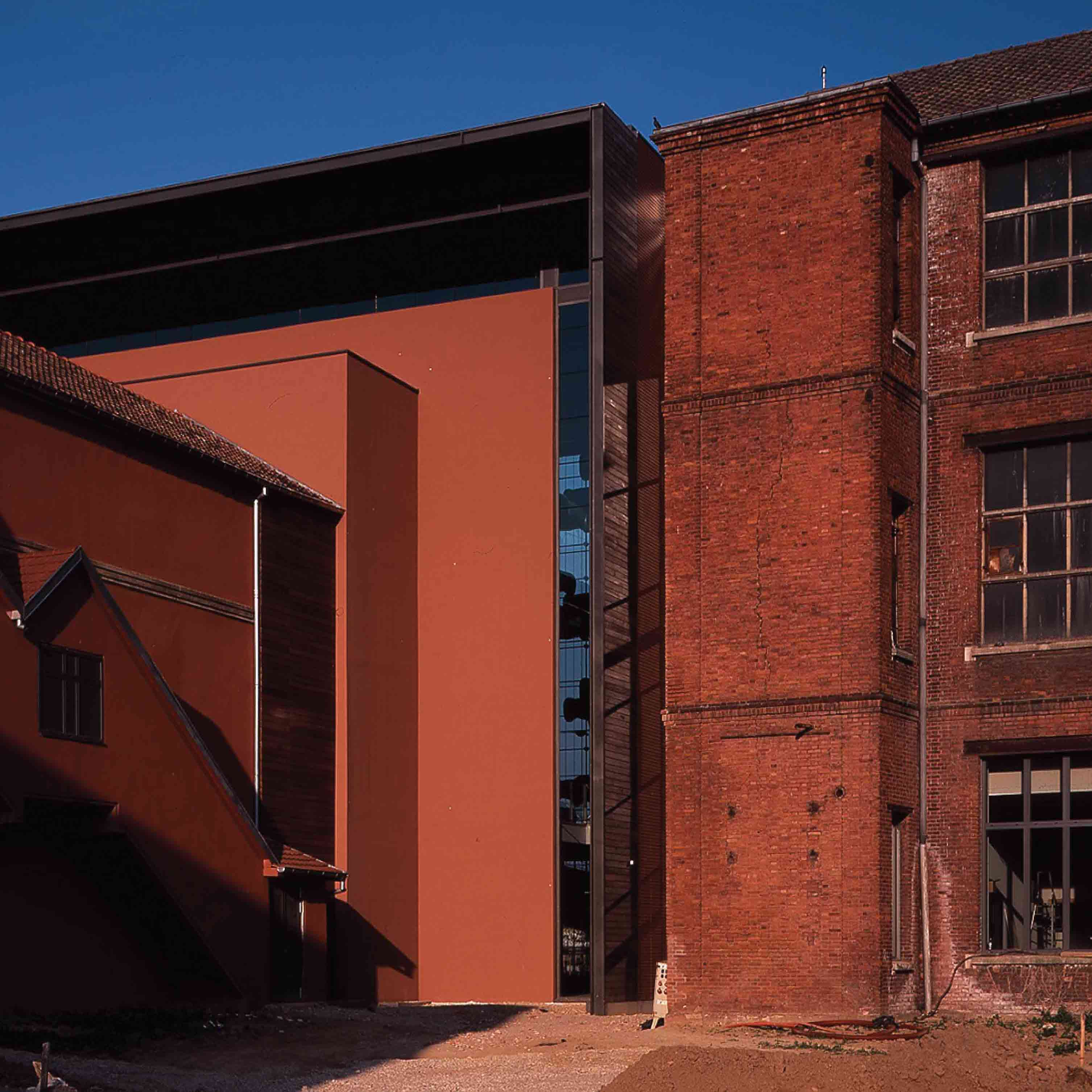 Articulation of the entrance area with the existing structure 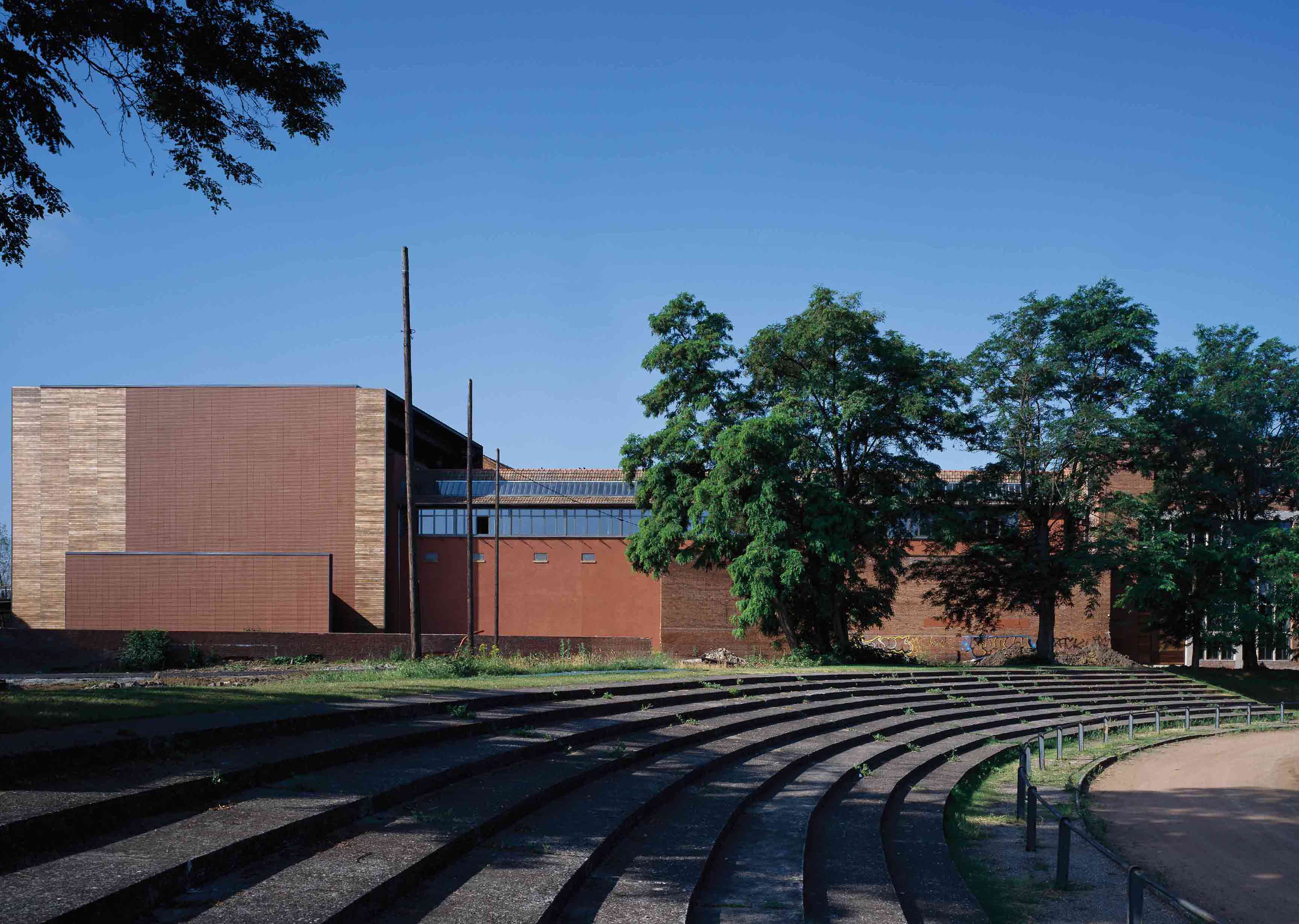 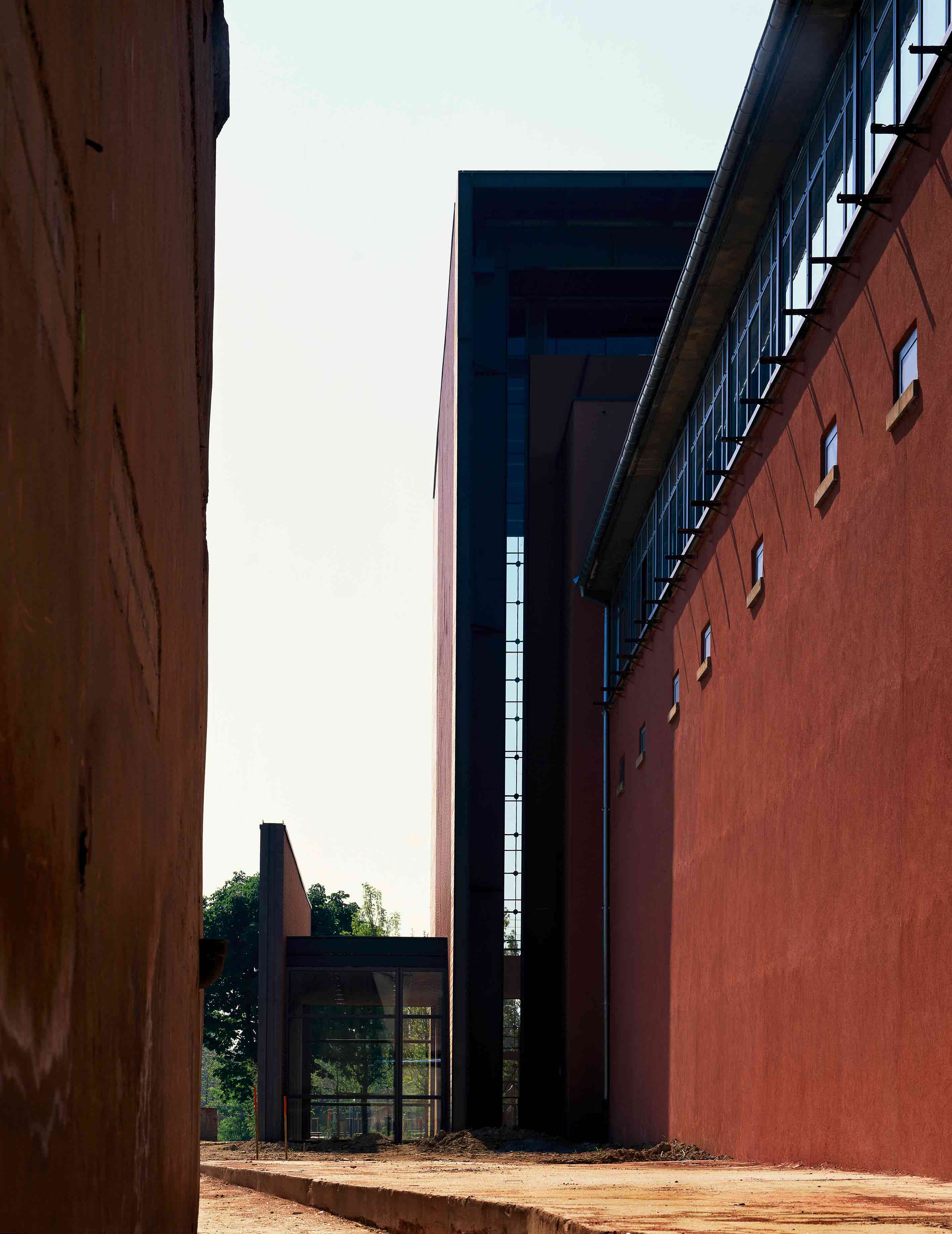 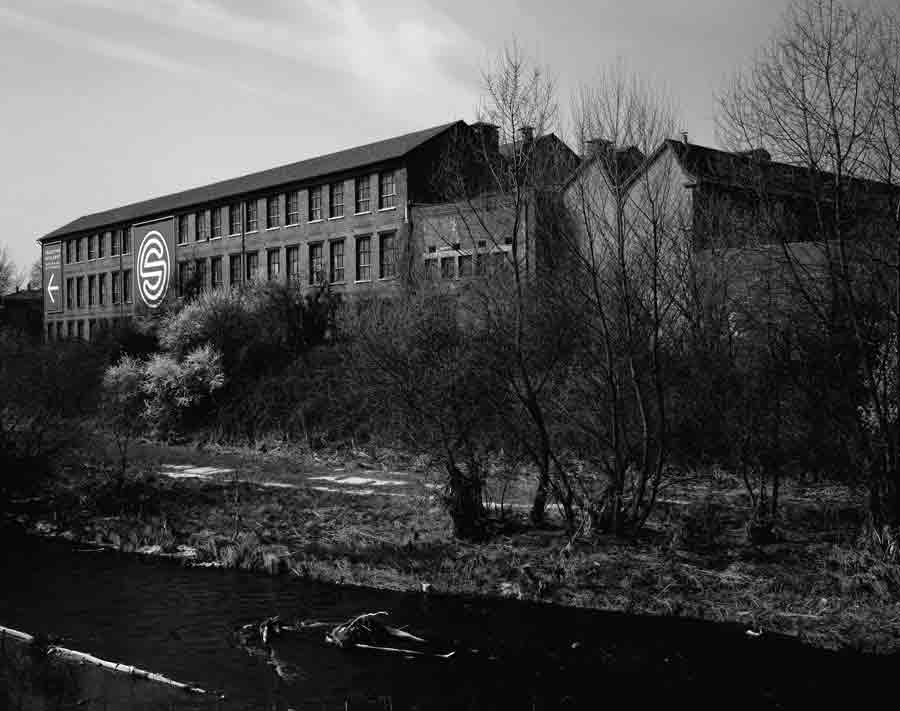 Photograph of the factory before work commenced

Design for the entrance to the museum: Arriving in the museum car park, the visitor is immediately struck by the size of the building’s entrance and by its “cars in flight”.

Having noted these, he or she takes the bridge and advances towards the entrance area, the “surreal” character of this collection of cars becoming stronger and more present to the senses in doing so. Seen from the outside, this design evokes the “mania of production”, the “racing against nature”, which is a part of the car industry, and it features an improbable collection of cars and animals suspended in space against a background design evoking the design of cars. This is complemented by a system of hanging sounds, like a great “industrial harp”, in which natural, atmospheric and industrial sounds are mixed. Design for exhibitions in the former wool store:

This area is a former storage space, and it acts as a transitional space between the entrance area and the museum proper. Lit by artificial light, the area is crossed by a bridge overlooking the last exhibition area of the visit. From the entrance area the bridge leads rapidly into an animated environment of sounds coming from the lower level (motor noise and movement).

A panorama of images projected on the wall evokes the ways in which traditional customs (marriage, birth and various festivals) have been changed by the advent of the automobile, and how road construction has changed perceptions of the countryside. Coming back, the visitor sees the same area as before, but now from the opposite direction.

The Bugatti 57 hall in the former factory building 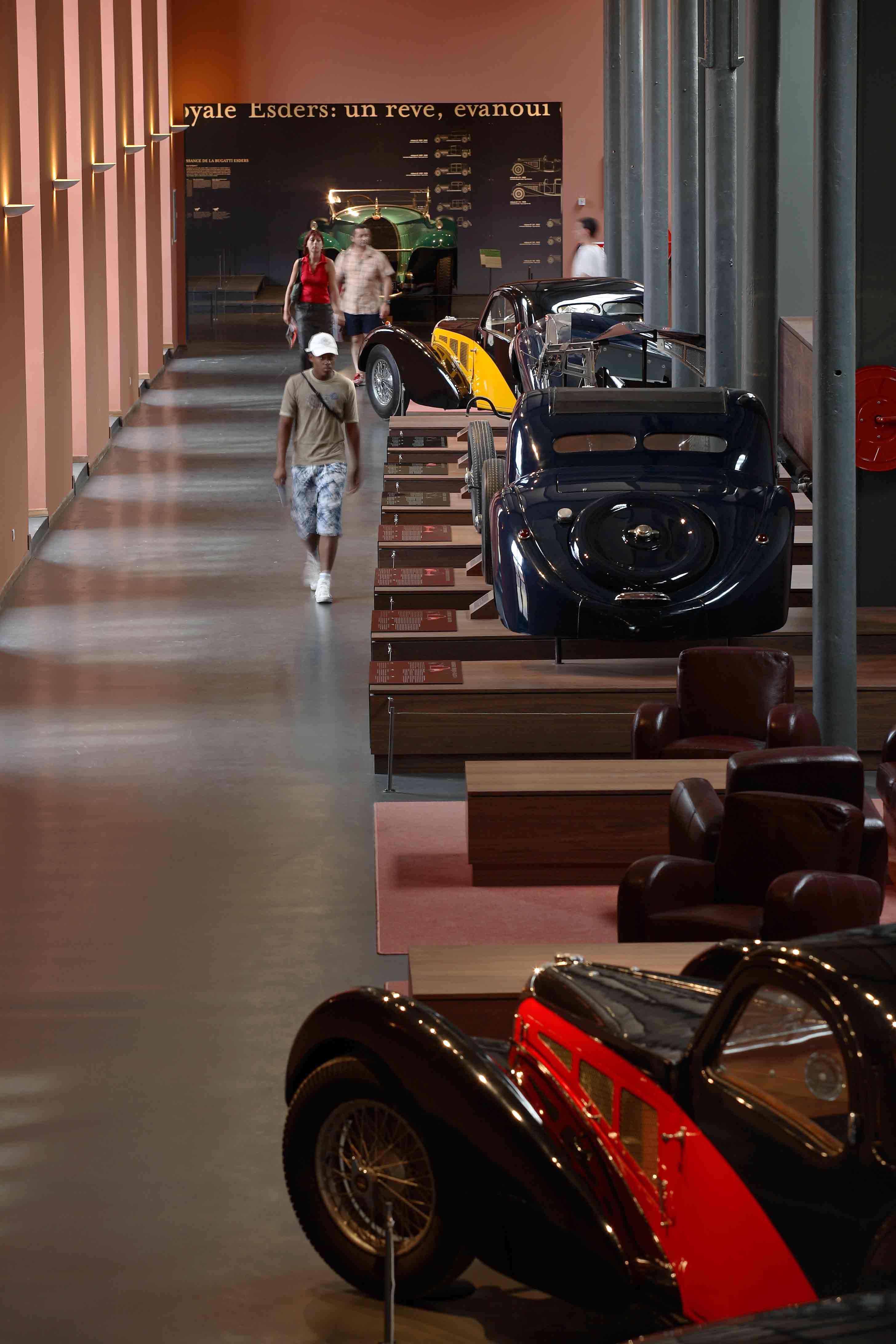 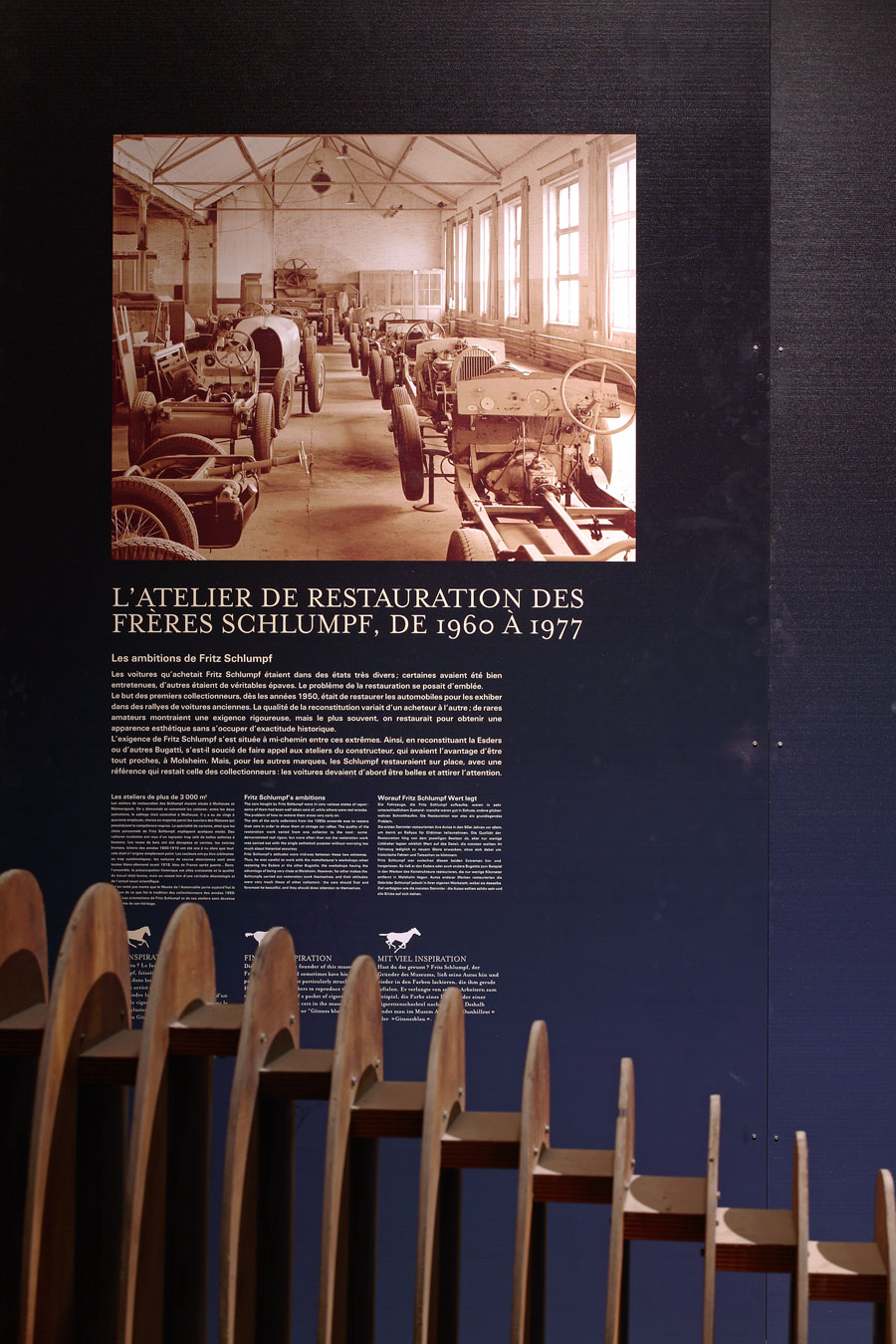 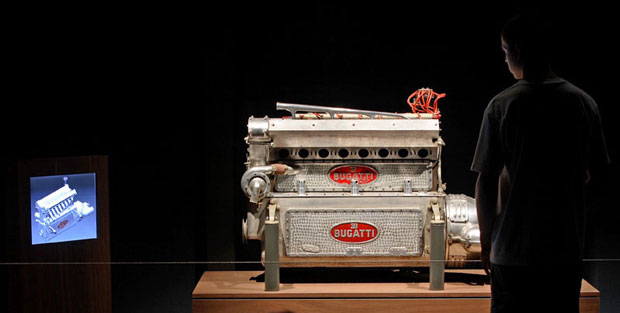 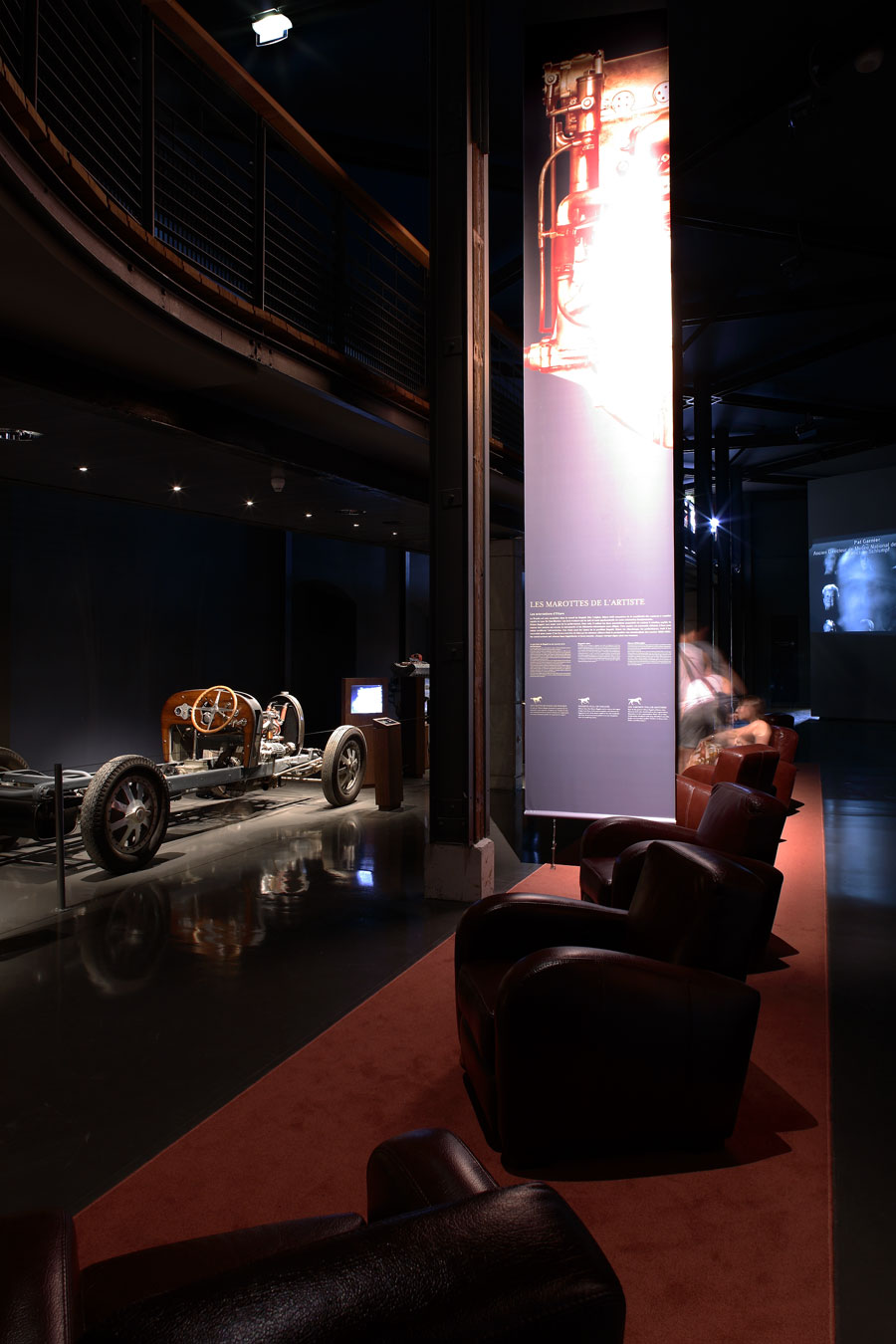 Work on the visual identity of the new exhibition spaces

The visitor begins with a dual image of horse and car, car and horse. On the road, driving along in a car perhaps, one’s eye is drawn to a spectacular, enigmatic façade featuring a shower of cars falling, motionless, within a large frame set in space. In fact, these both are and are not cars. While they have the form, the curves, and the dimensions of cars, they nevertheless glitter in the sunlight, looking as if they have multiplied under glass, like a shower of pieces of gold. These cars signal the entrance to the Automobile Museum, and the visitor has probably already been stopped short by it….However, in the middle of the golden cars there hangs a horse, and behind them there is a giant eye, an animal eye, with a strange, visionless look. This is also a horse’s eye, or perhaps it is the eye of a fool who nevertheless always asks questions that no one knows how to answer. This eye both is and remains the mystery of this museum: it is an eye that stays silent, watching people come and go in beautiful cars that perhaps control them more than they control their cars. We can begin here, which is already a good start.We have conquered our freedom, a freedom that everything encourages us to claim. Now the project follows. 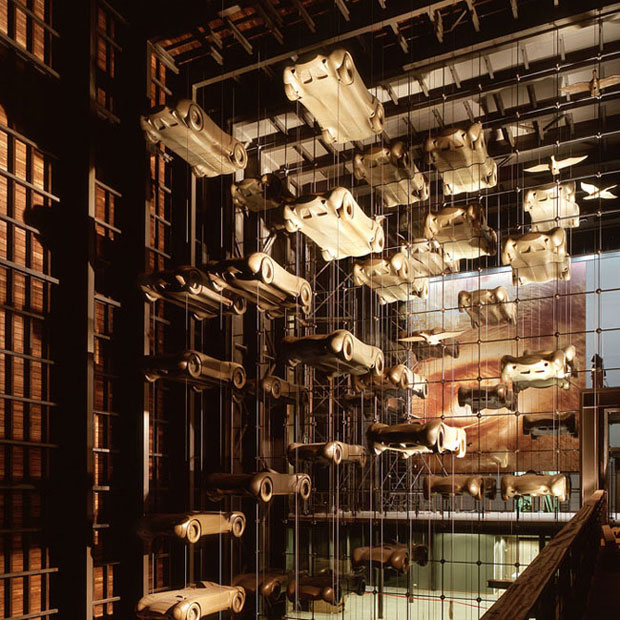 the cloud of cars at night 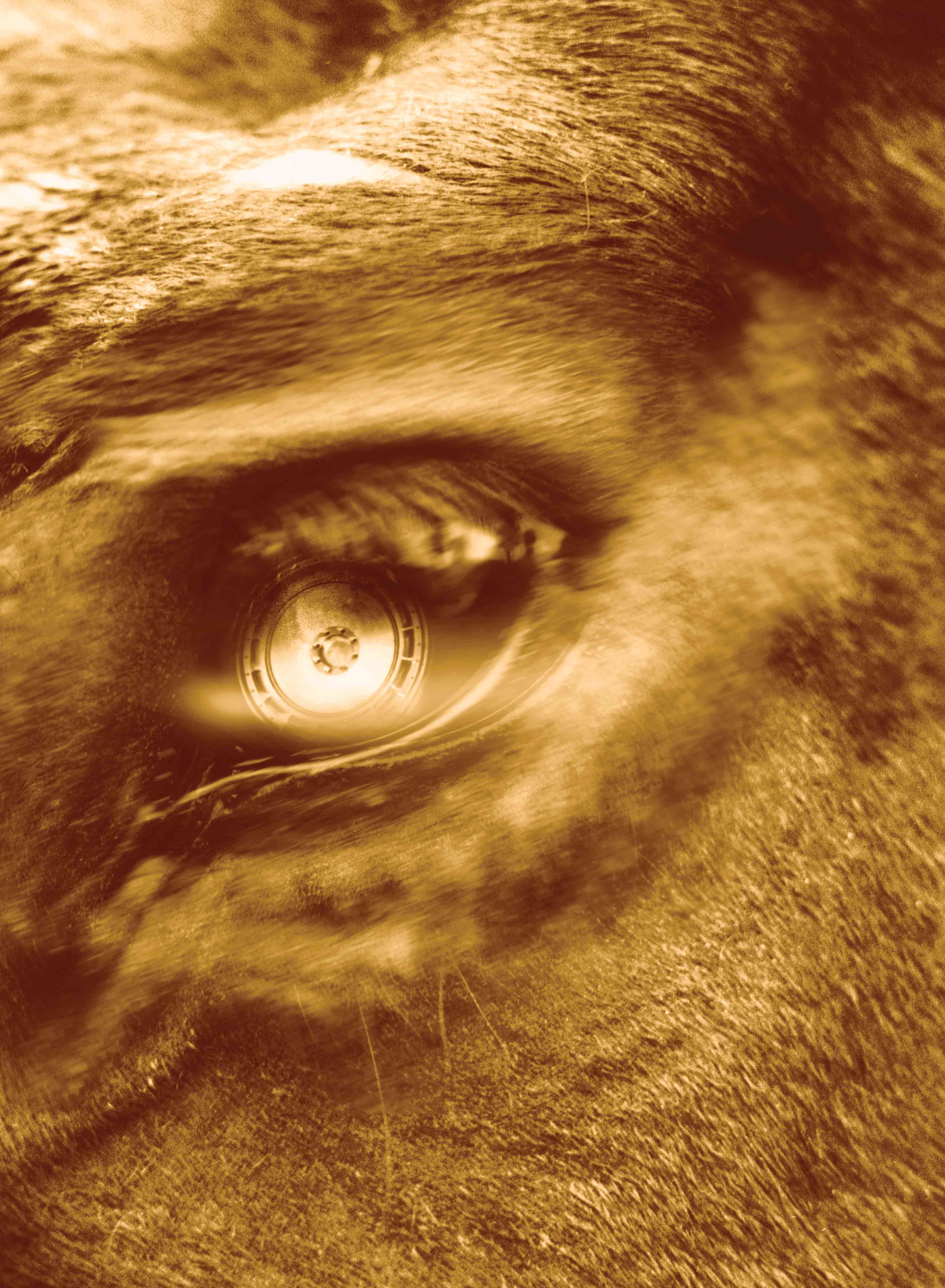 entrance area component: a wheel reflected in a horse's eye 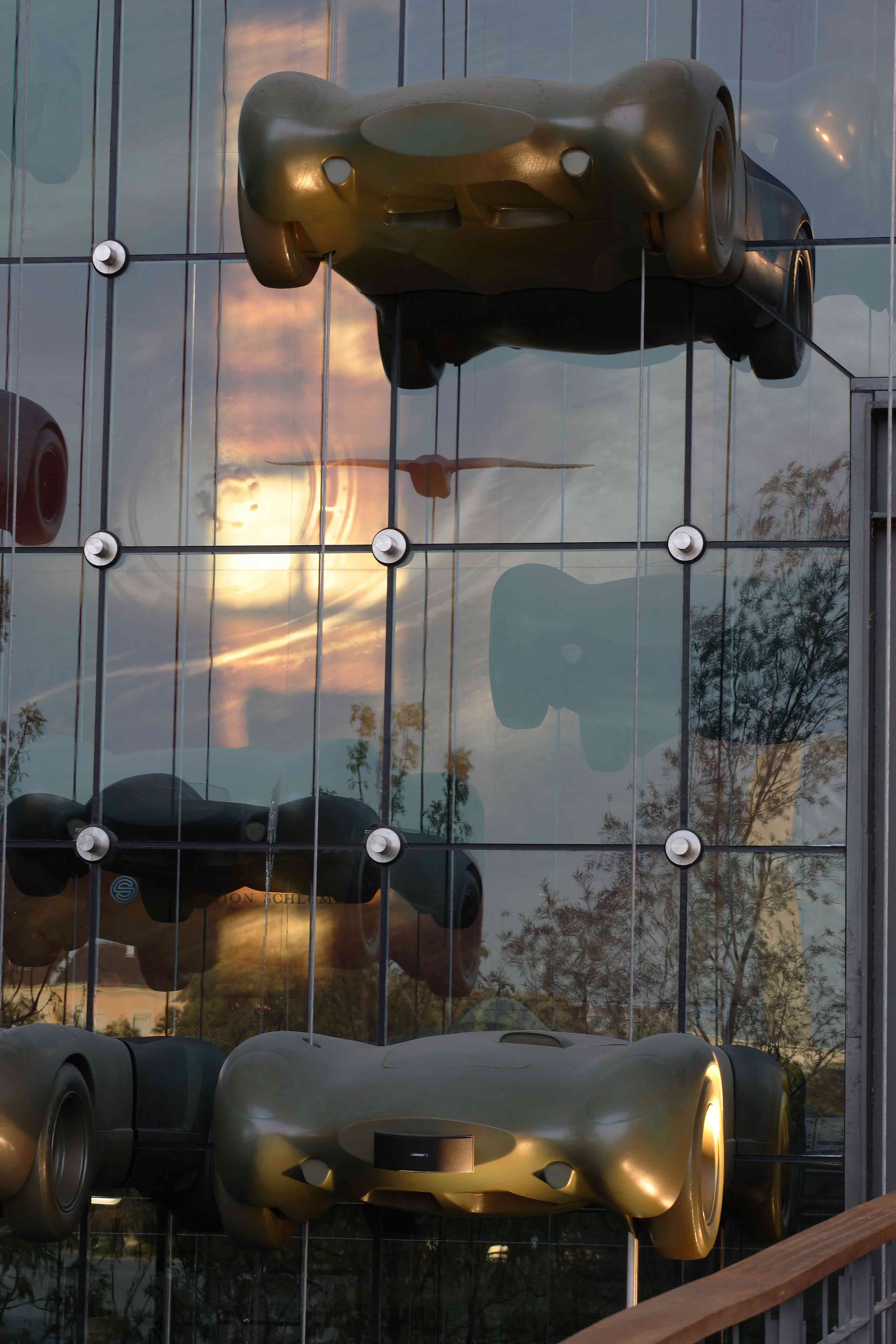 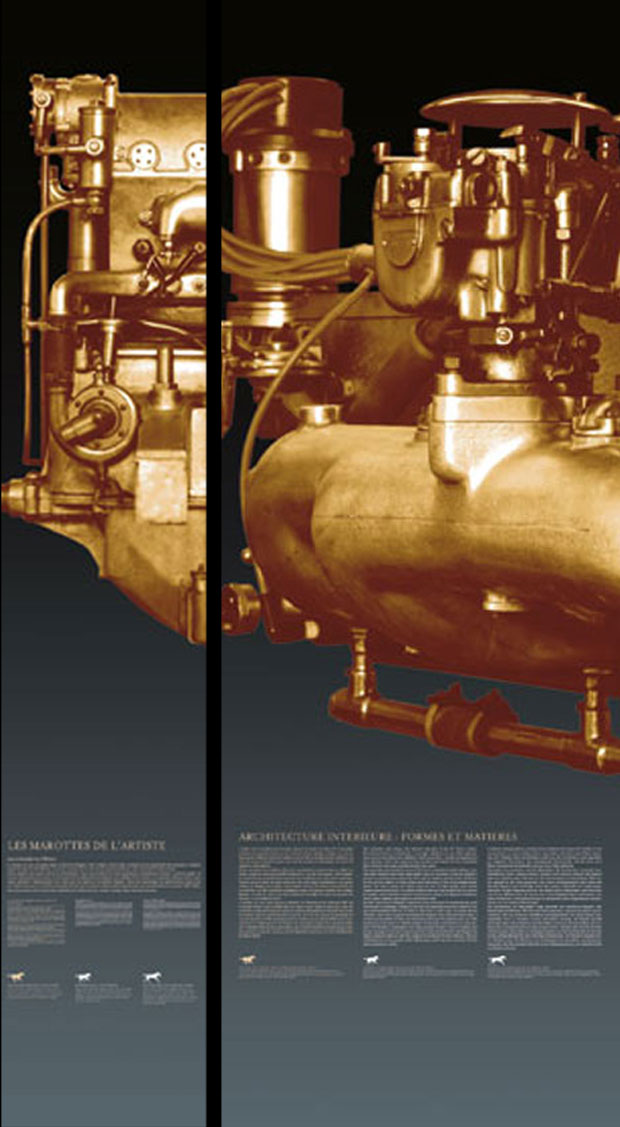 Component from the museum panels

The message of the collection

The National Automobile Museum wants to be at once a museum of the civilization of the automobile and the greatest collection of Bugatti cars in the world today. Since it is through the juxtaposition of these two aspects that the museum will create its particular identity, the emphasis of the exhibition should lie in confronting the following question: What is the message of the Bugatti collection for us today, after a century’s development of the civilization of the automobile? The answer we have given to this question can be stated as follows: «Coming from a period before the separation of art from engineering, the Bugatti collection remains for the general public today the lost paradise of modernity.» This «lost paradise» contains elements from suburban workshops and futuristic fantasies, as well as from the creative explosion that took place in Europe at the beginning of the 20th century….It is the vocation of the Mulhouse museum to present this profusion of creativity, setting it against its presentation of the socio-economic features of today’s automobile civilization. 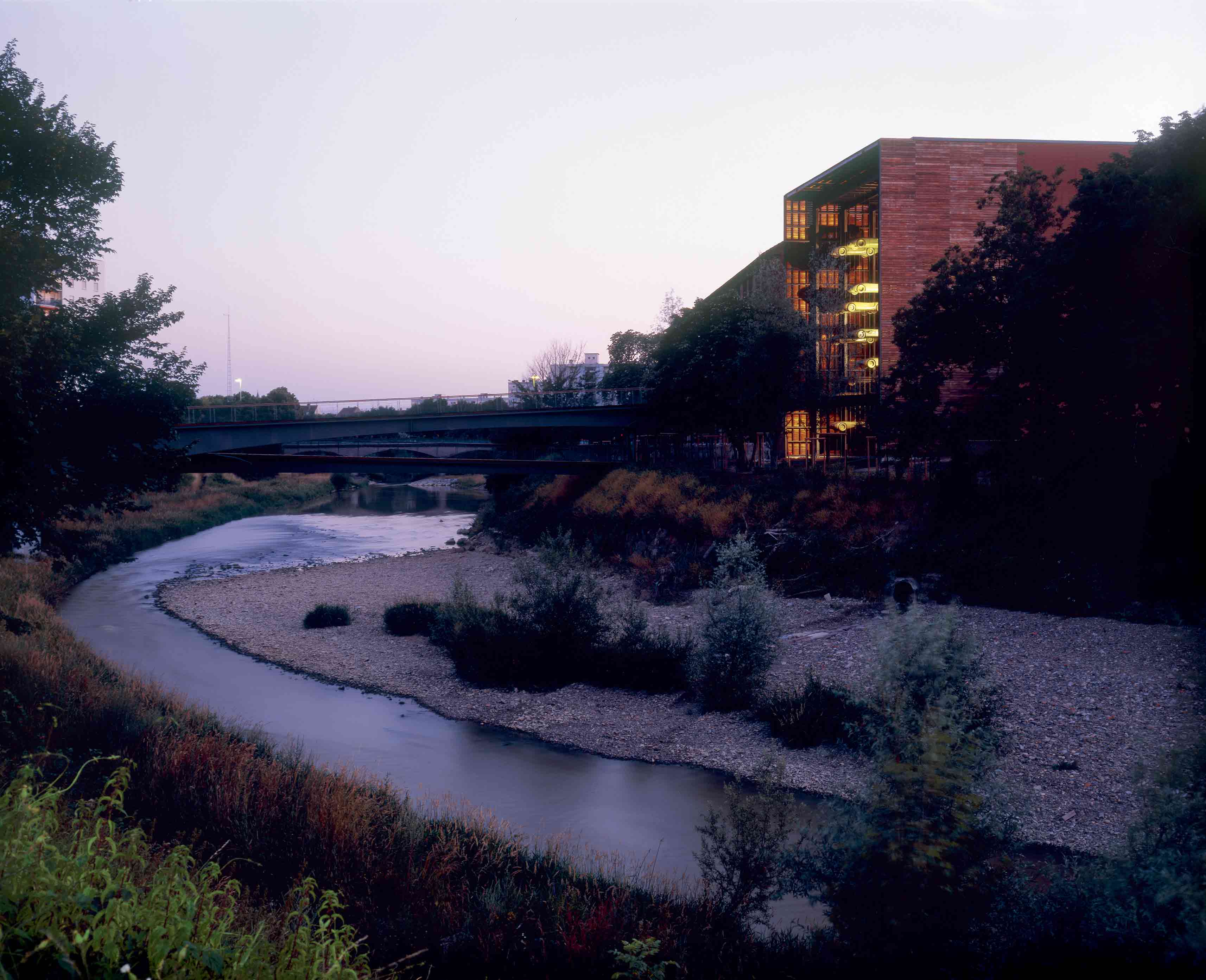 New entrance area and the canal 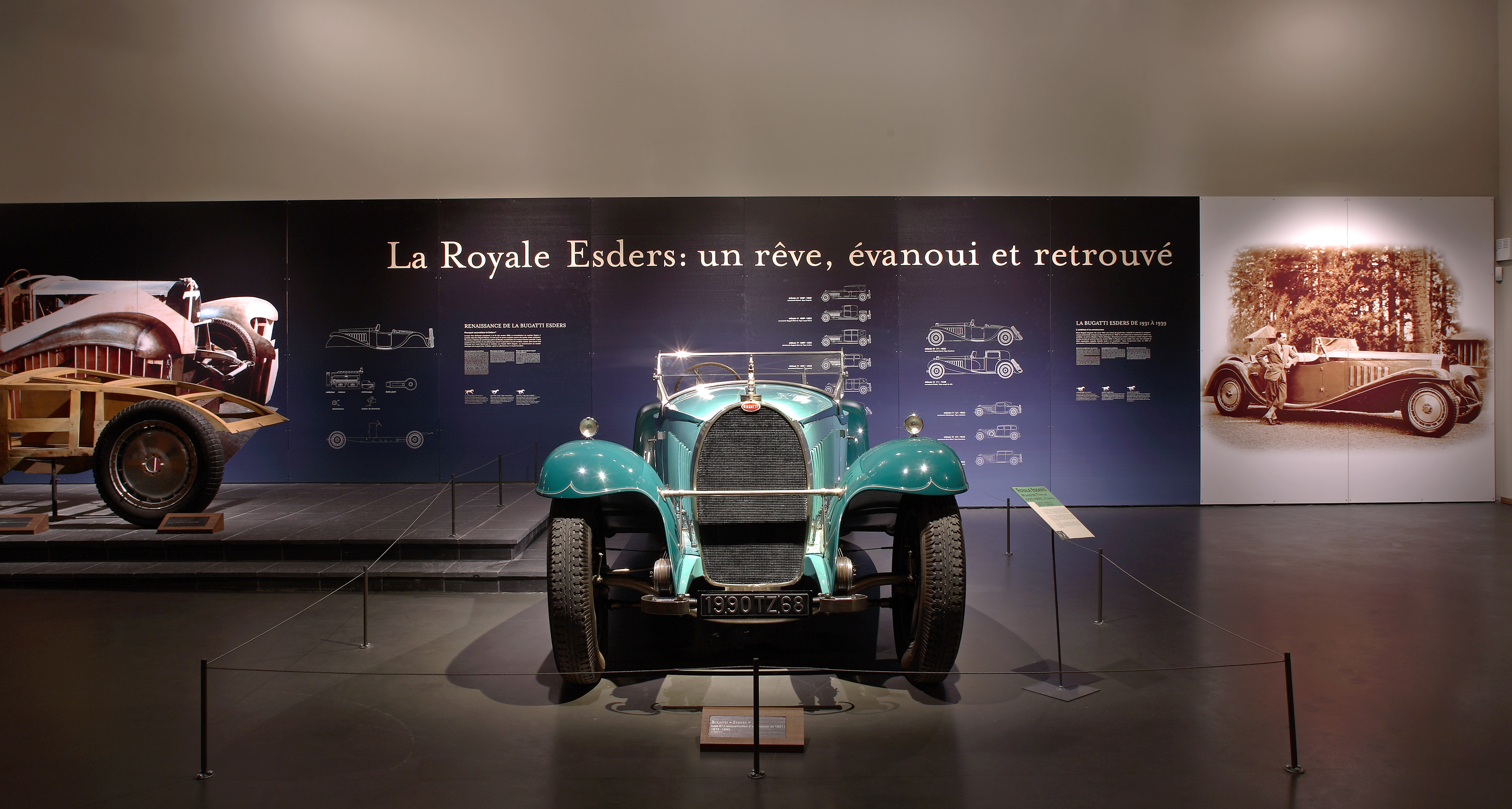 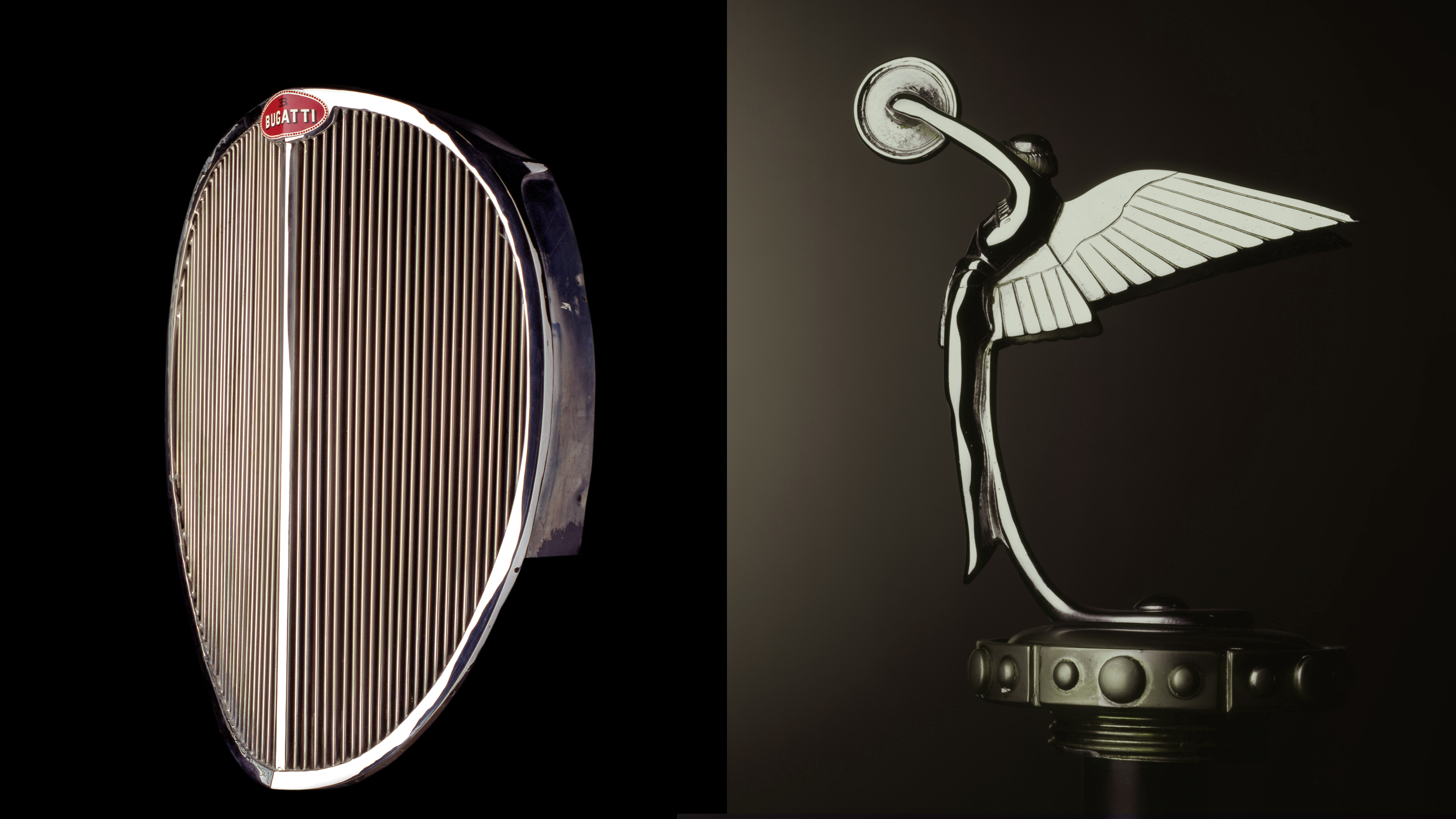 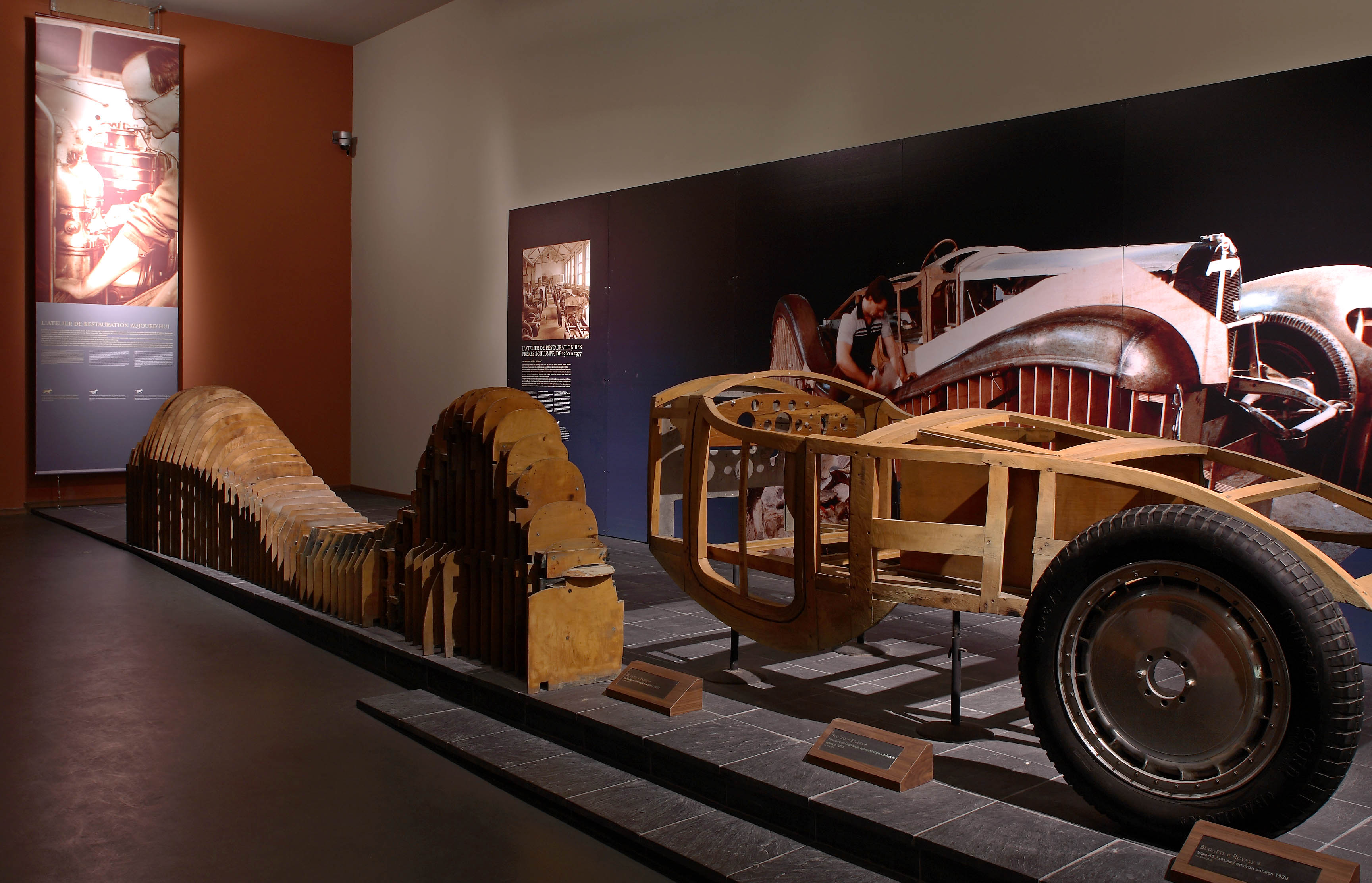 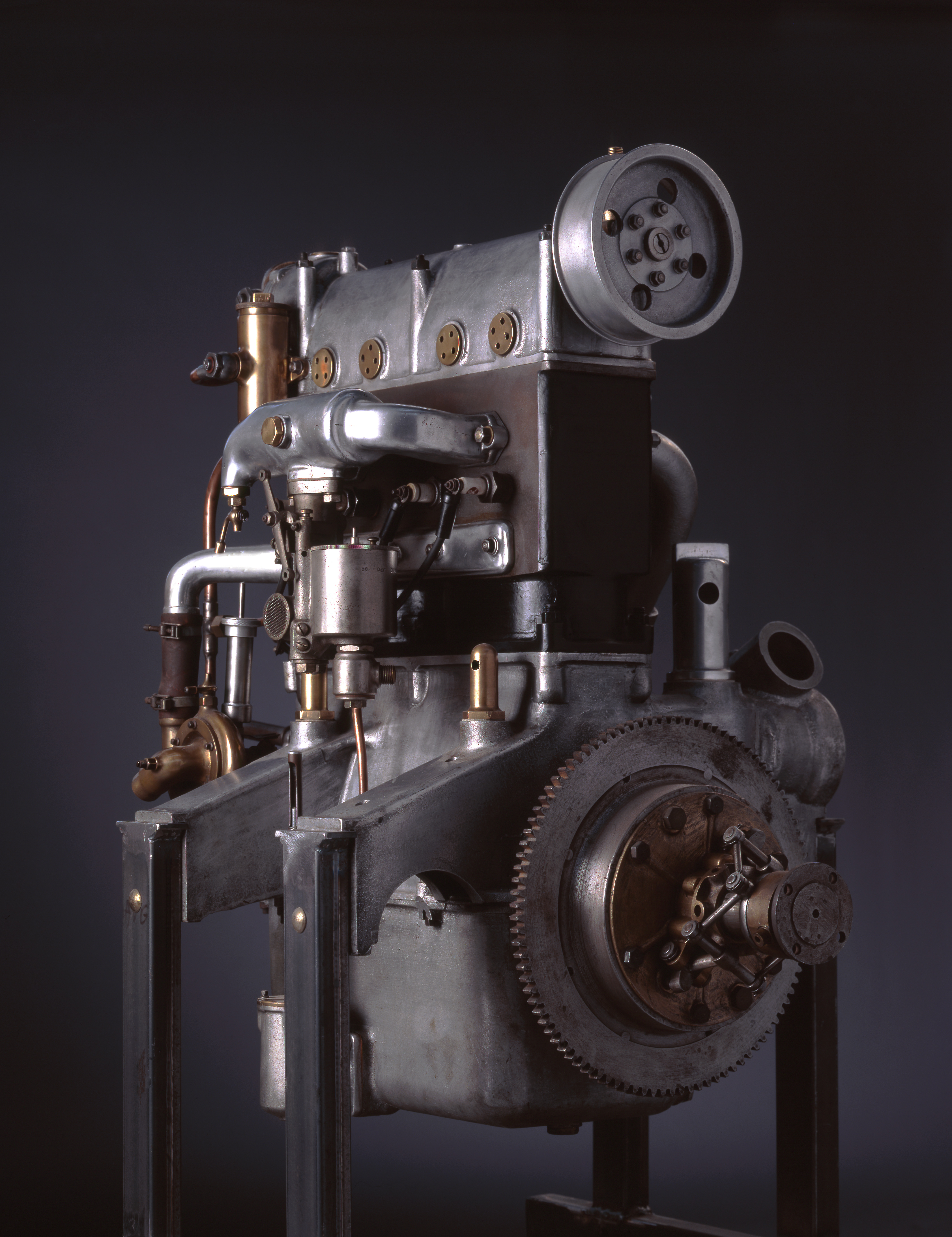