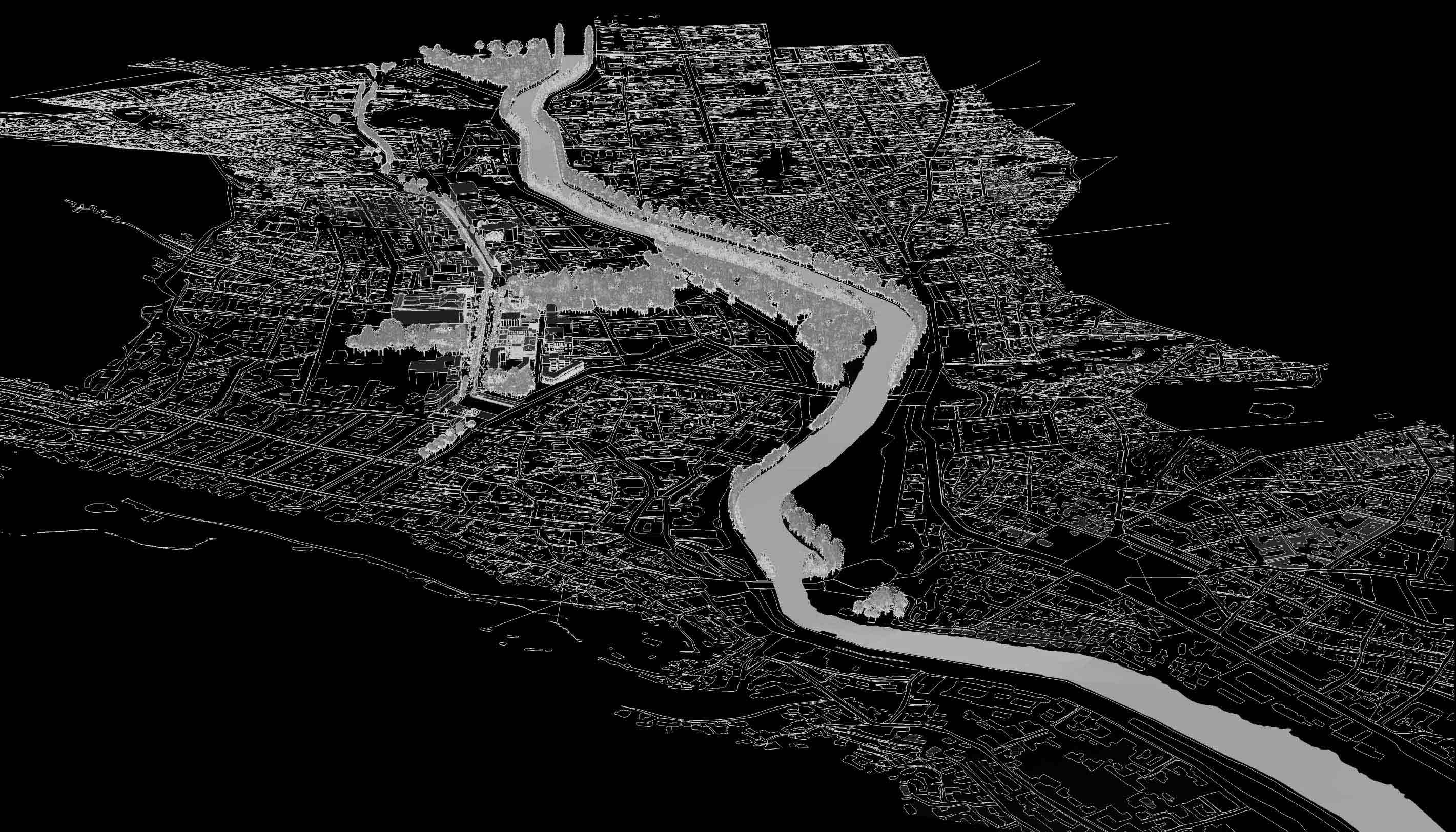 Masterplan of the National Museum of Georgia, Tbilisi. Georgia

The Kura river,
Rustaveli Avenue,
the Street of Museum

The project proposes to transform a part of Rustaveli Avenue into a place dedicated to Georgian culture, arts and traditions, a destination that is at once innovative and creative in character, located at the heart of the historic city centre.

The “Avenue of the Arts” proposal aims to provide a spectacular open-air and multi-purpose platform for the use of the different museums and cultural venues existing along Rustaveli Avenue, allowing them to present activities for the public in an open public area. It will be open in the evenings and during the daytime and will complement the city’s other attractions and activities, including those in the tourism and the hotel sector.

The “Avenue of the Arts” proposal will involve key cultural and art institutions along Rustaveli Avenue in order to ensure the critical mass of exhibition and programme material needed. This creates a strong “cultural platform”, able to attract visitors from the city and beyond, to help it fulfill its historical role as the Cultural Capital of the region.

At the end of the Avenue of the arts, Janasha Museum and the Fine Arts Museum are the landmarks signing the entrances of the Museum street, the concept proposed in 2006 to unify the Georgian National Museum. 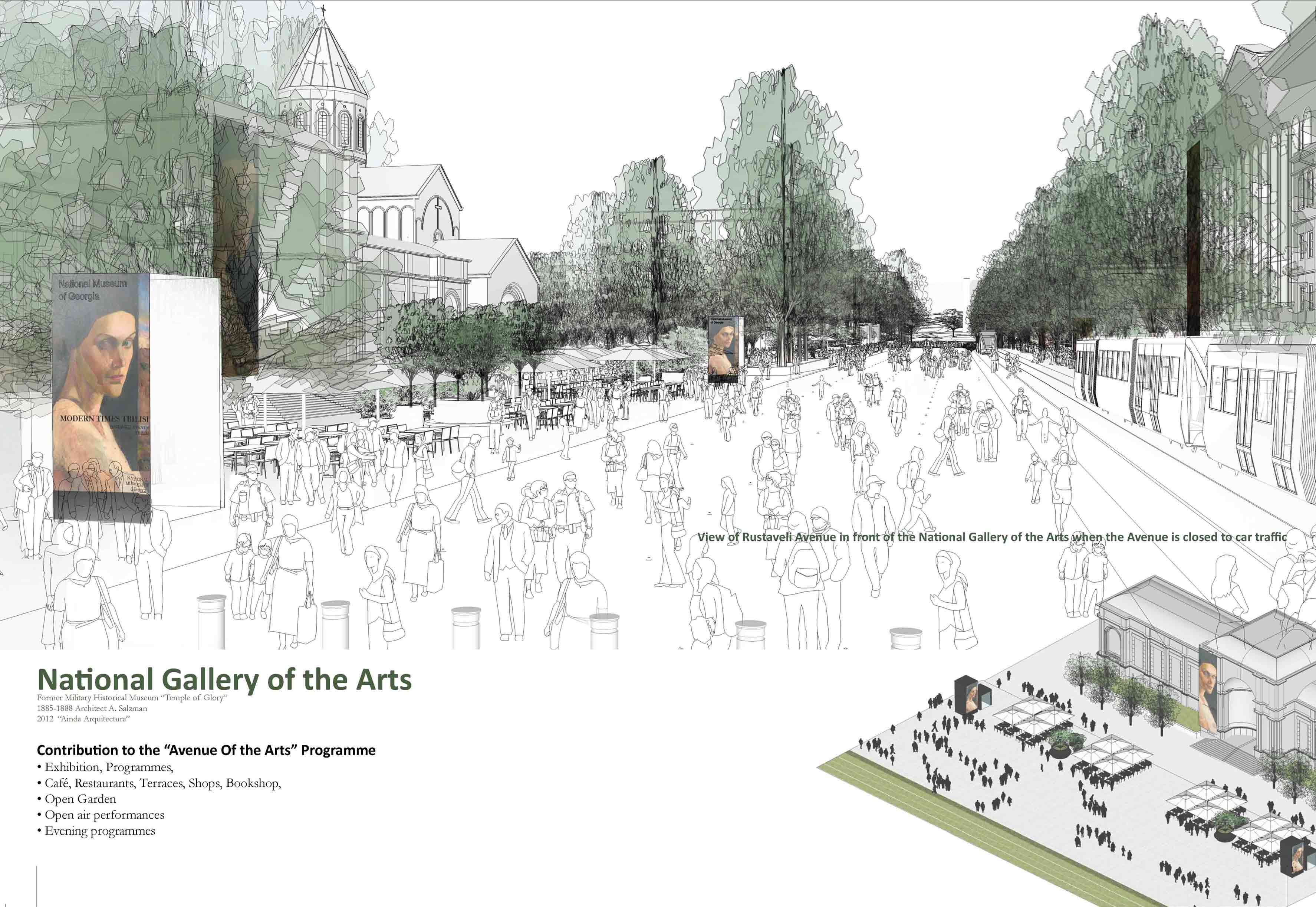 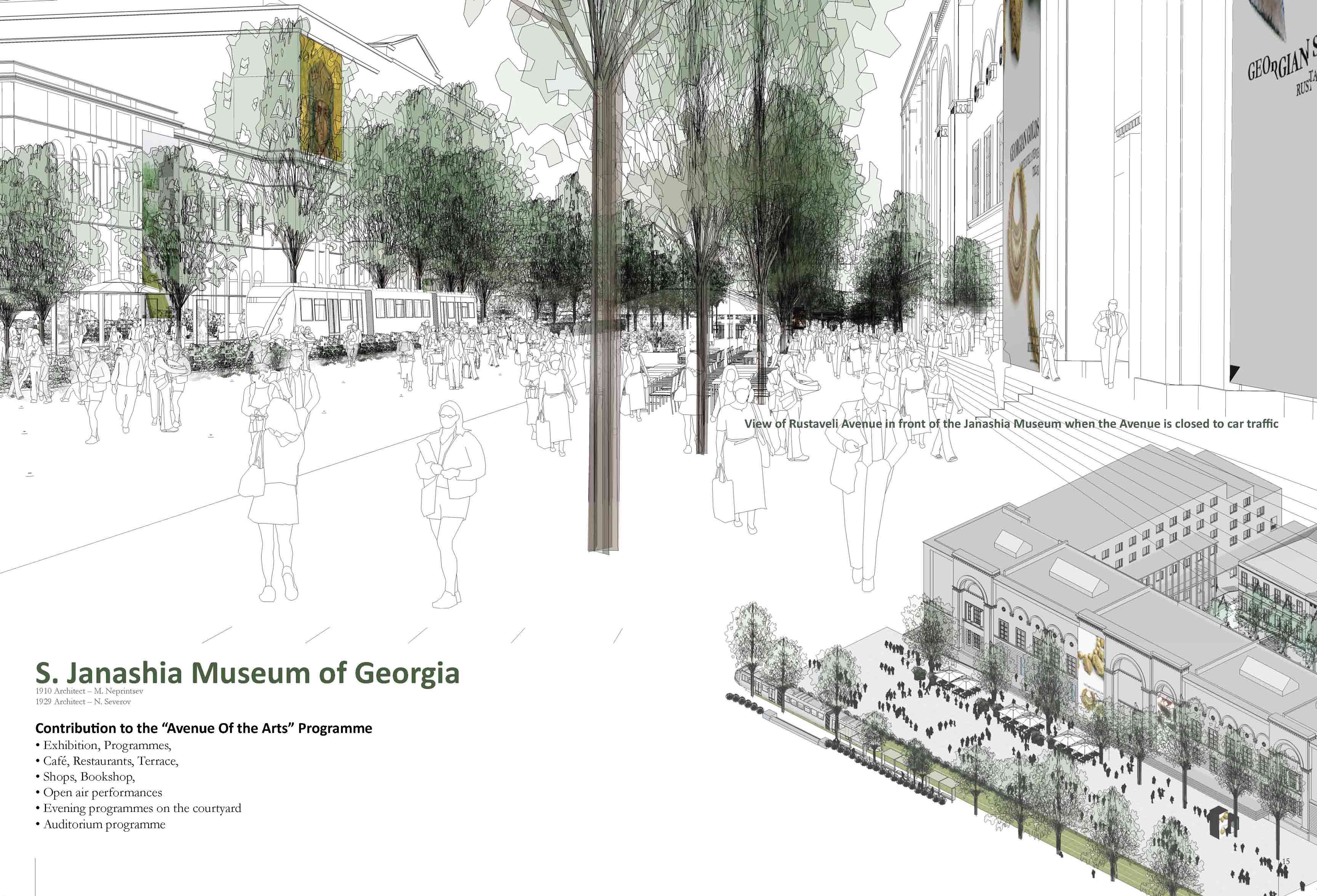 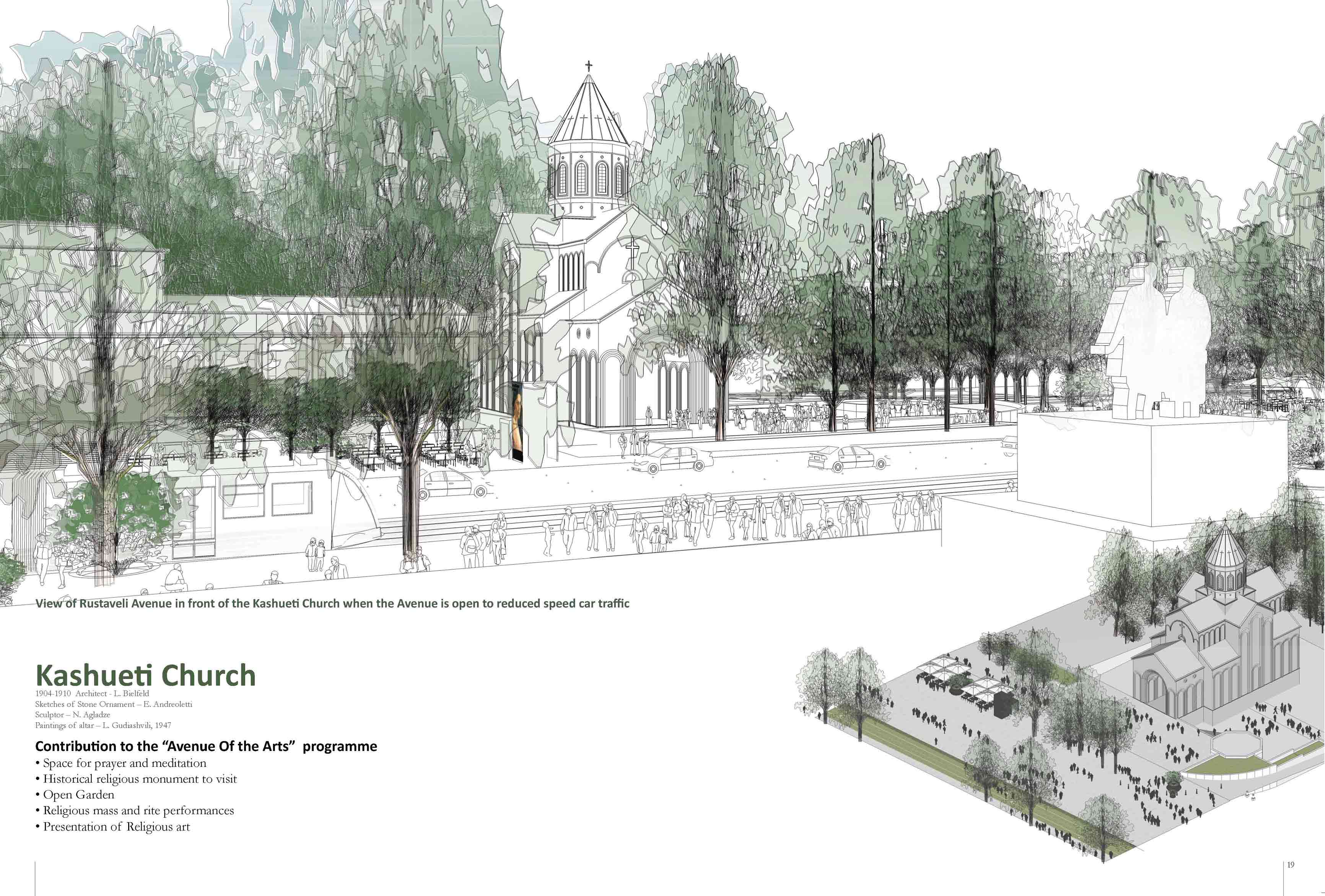 The Street of Museums,
A Collection in the City

The National Museum Masterplan proposes the development of a renovation project for the National Museum within the framework of a large-scale urban project that includes the creation of an urban district dedicated to the arts and to culture. This district will develop its own characteristic activities over time, and it will become an attraction in its own right within the city of Tbilisi.

In order to develop the project in greater detail, and to bring in new ideas, Georgian architects were invited to enter an urban-planning competition, held in 2005. The results of this competition, the Art District Competition, were available in September 2005. Although no first prize was awarded, recommendations were formulated as a result of the competition in order to assist the authorities in formulating guidelines for the development of the district while respecting its character.

The public will access the different activities organized by the Museums via Giudashvilli Street, which is a quieter street than Rustaveli Avenue which runs parallel to it. The latter avenue will feature the institutional façade of the National Museum of Georgia. Mobile kiosks serving as cafés with terraces will be placed along Giudashvilli Street, which will become a pedestrian area. Activities carried out in the street will be open to all, and parts of it will be covered by removable awnings. 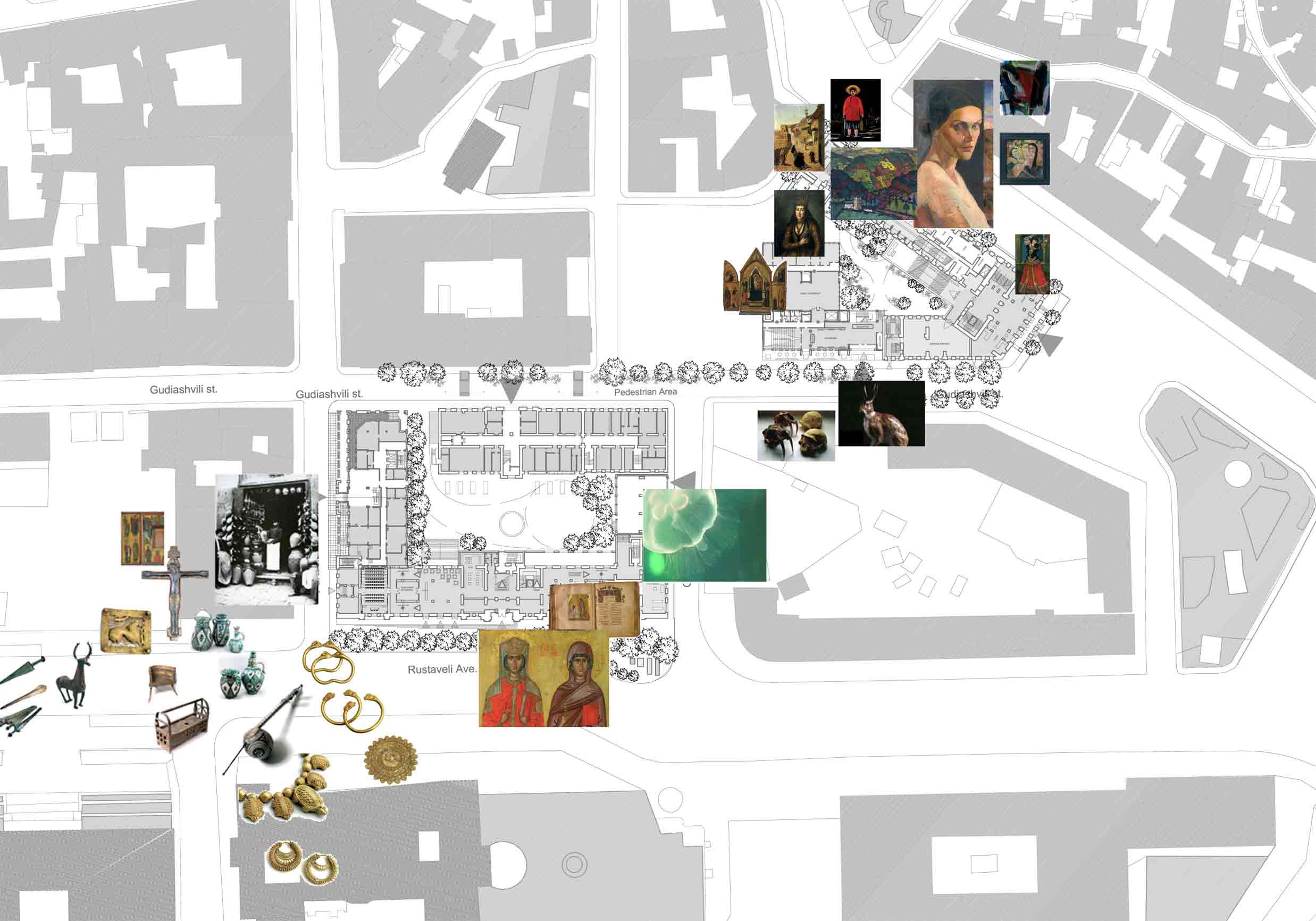 Museum Street, Collection in the city 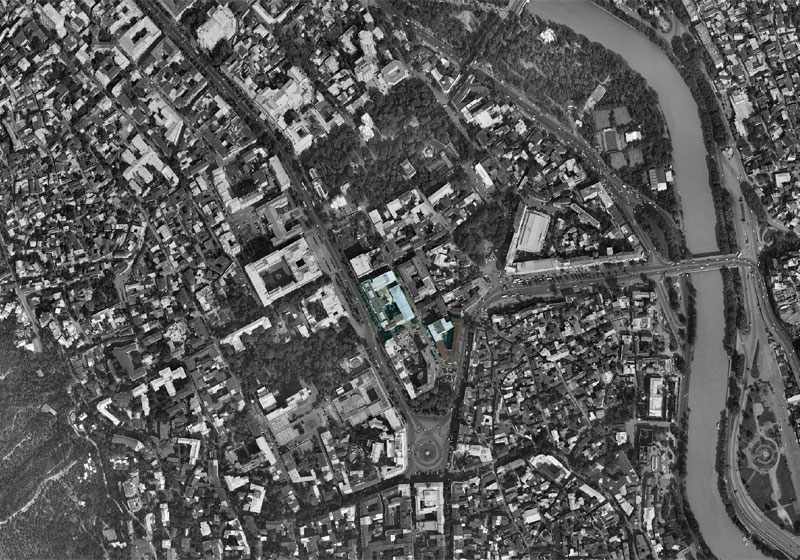 The museums in the city 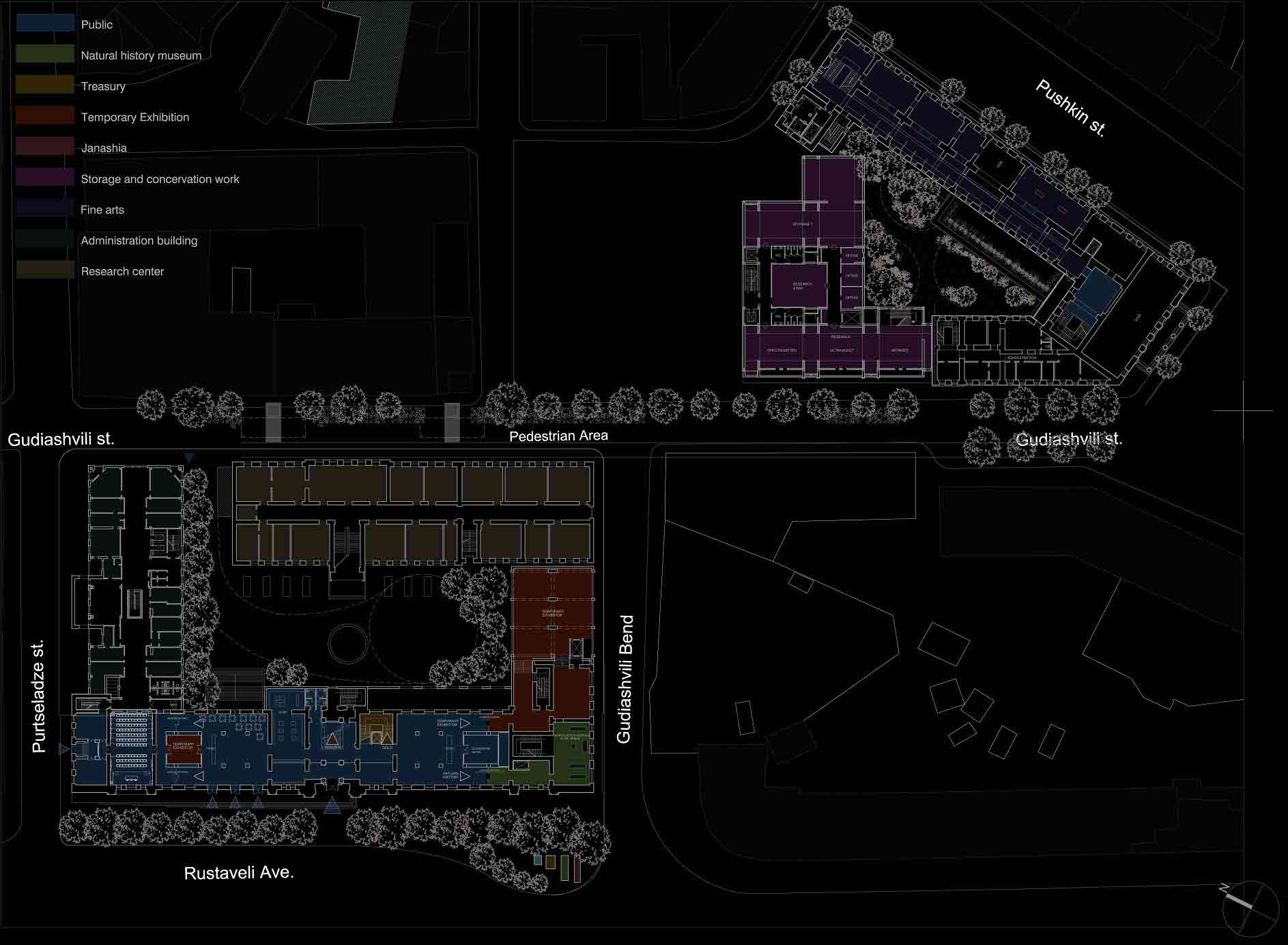 A grand stairway leads from the entrance hall of the new Museum to the interior courtyard of the Janasha Museum. This courtyard will be open onto Giudashvili Street during museum opening hours. A large roofed porch and signage will indicate this linking gallery from the street.

Museum Design Concept
A chronological exhibition from prehistoric times to the modern age, interspersed with a series of representative objects that lead off into rooms containing distinct groups of objects.

Themes presented in the Janasha permanent exhibition will include :

• Georgia in the world : the formation of the Georgian landscape (geology, paleontology, flora and fauna) and the major human migrations (Dmanisi)

• The major exchanges of Antiquity : the Bronze Age, the Golden Fleece, and the establishment of the Greeks and Romans in the region

• Georgia as a crossroads of different cultures : Persian, Ottoman and Mongol

• Georgia under Soviet rule and the contemporary period Architectural Concept : A collection in the heart of the city The visitor itinerary will include views of the collection alternated with views of the street scene outside on Rustavelli Avenue.

In the same spirit, transparencies will be installed at intervals on the building façade, allowing the Museum’s activities to be seen from Rustavelli Avenue. 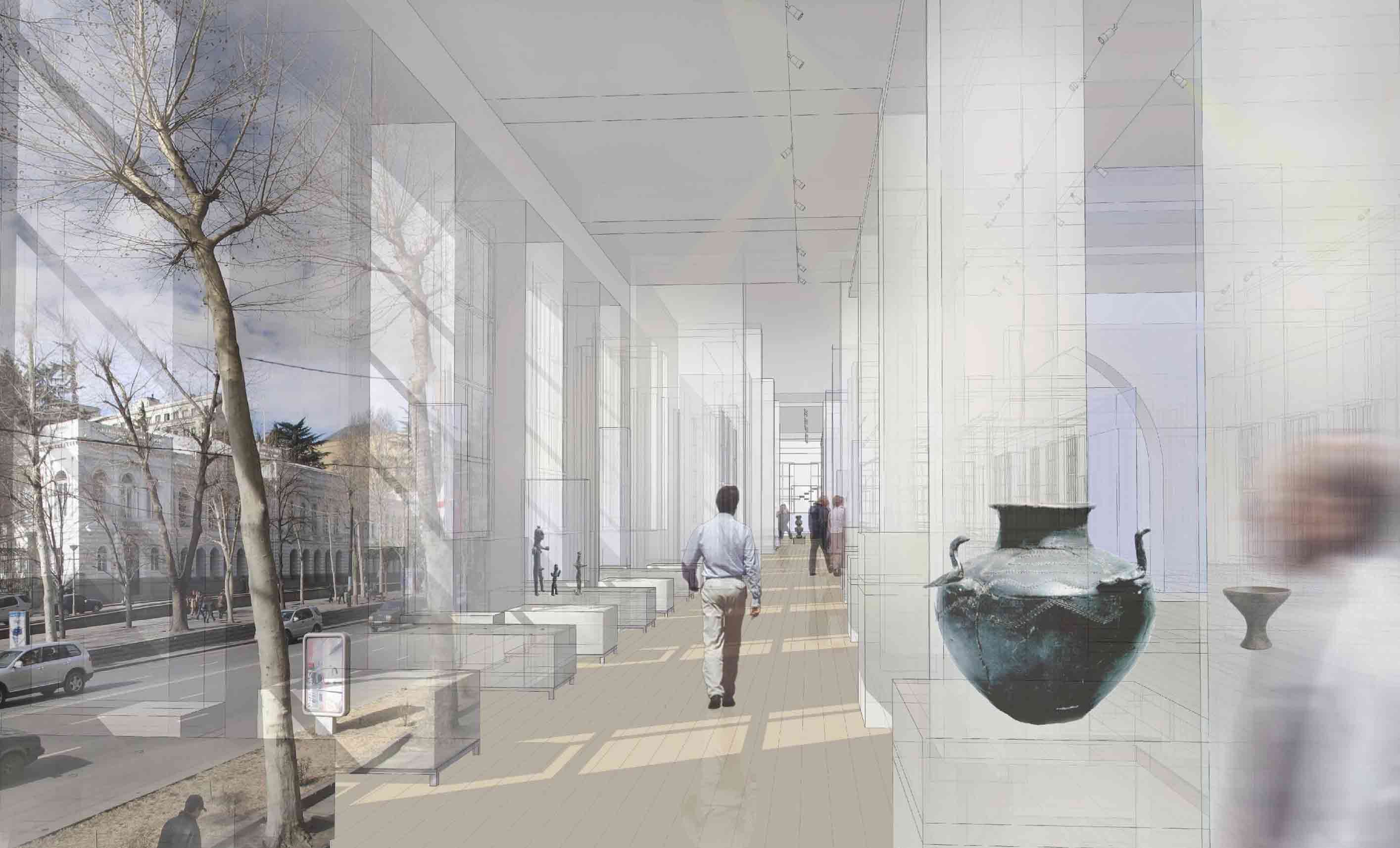 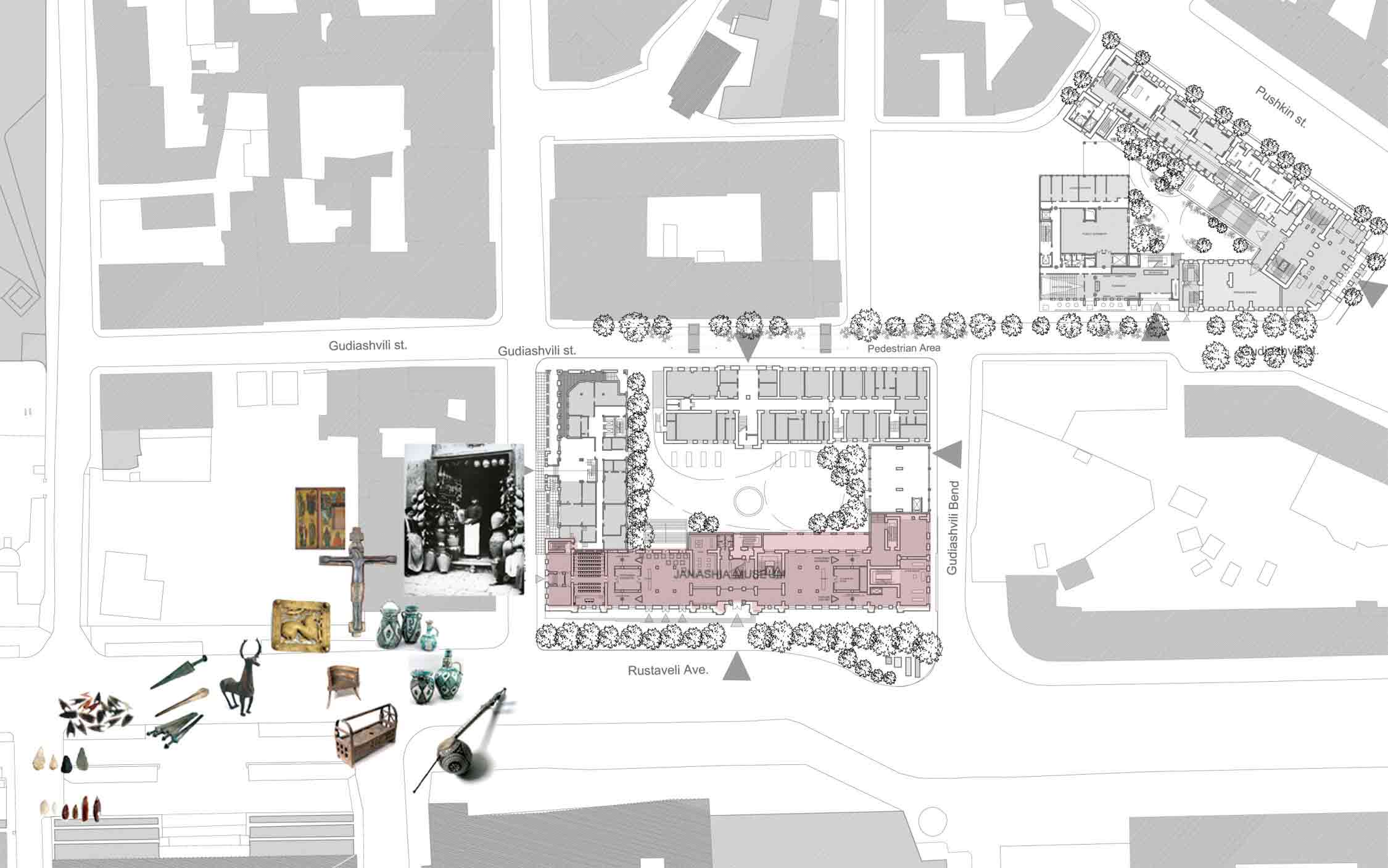 Collection of the Janashia Museum 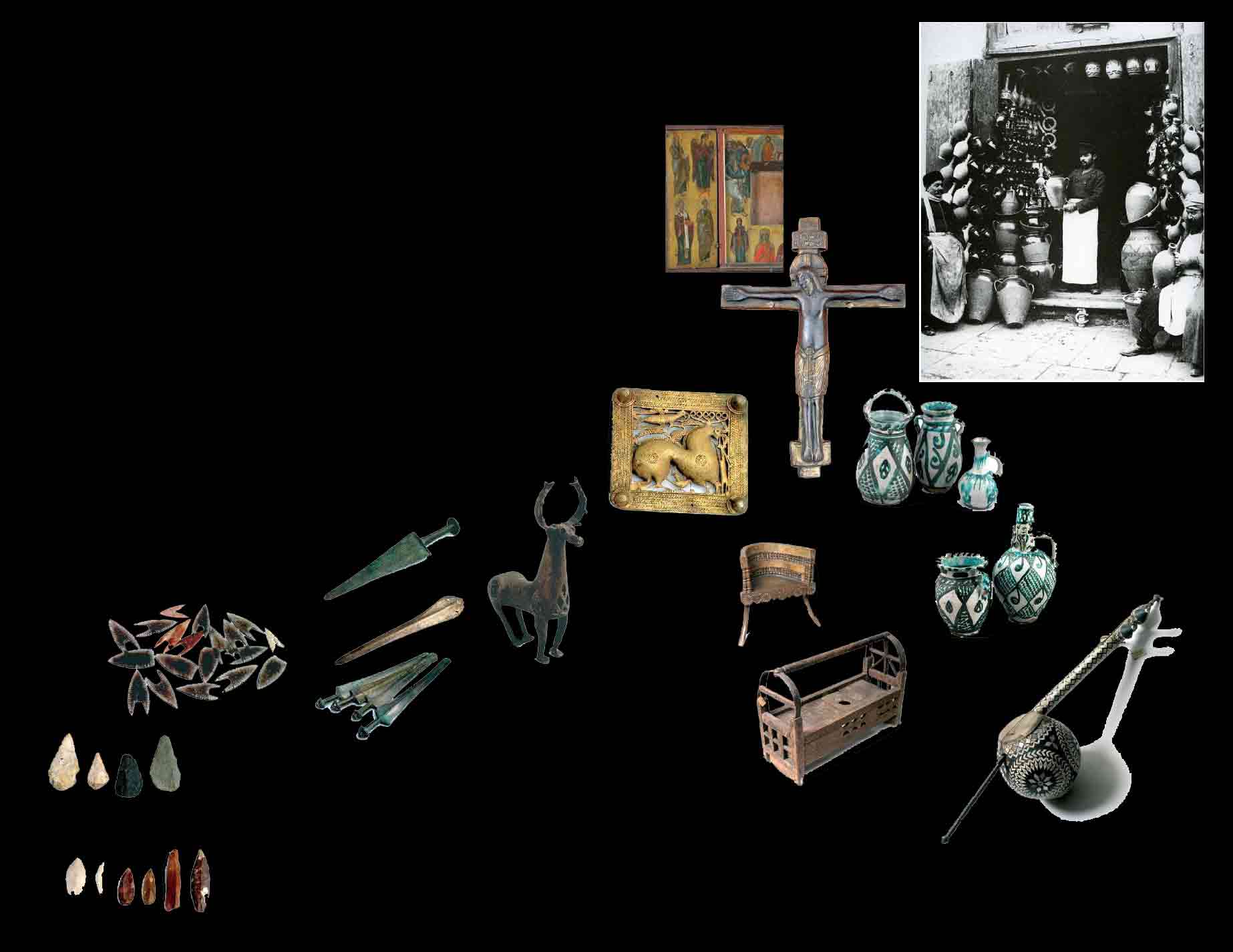 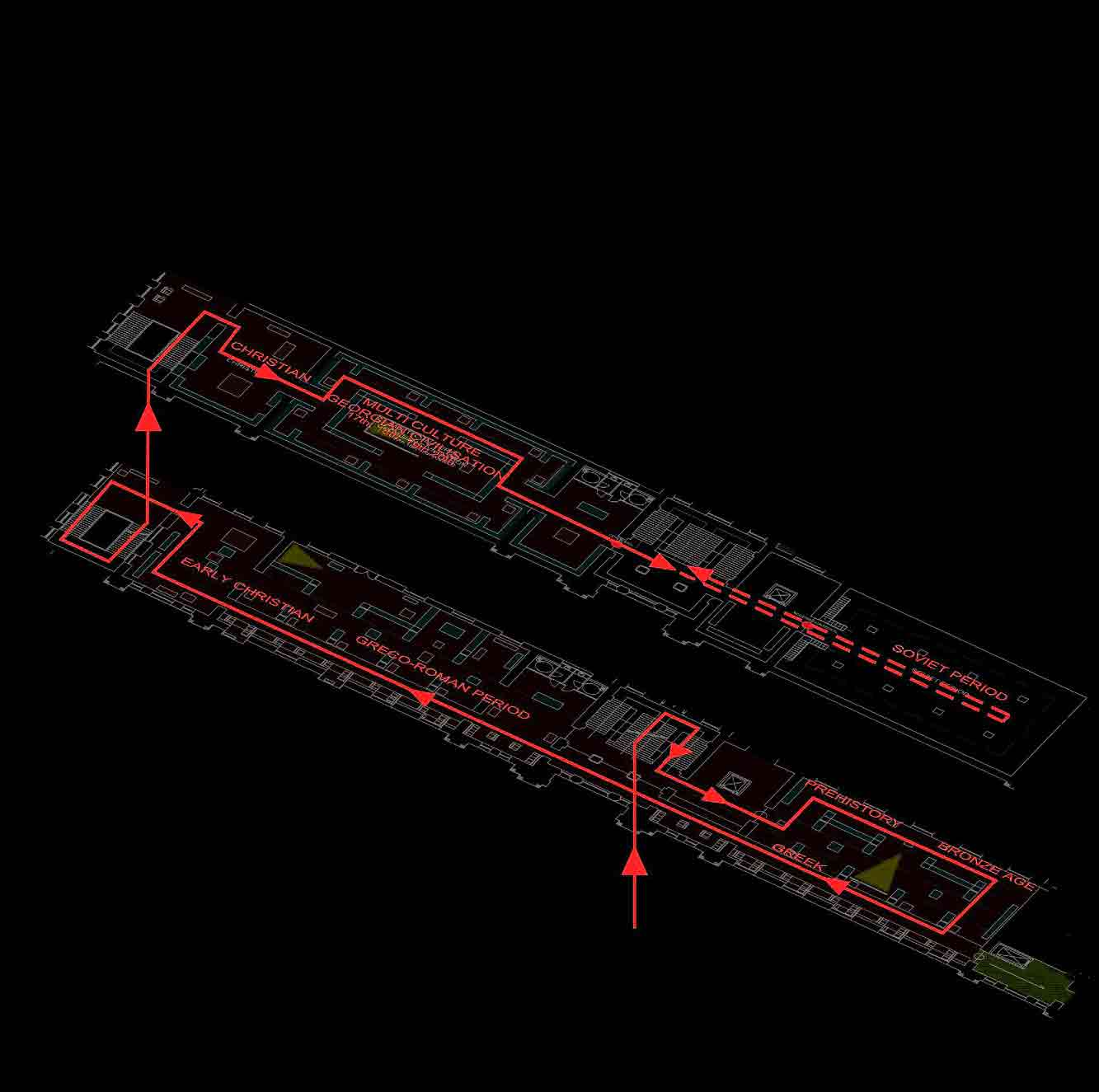 Circulation in the Janasha Museum

The Fine Arts Museum will have two entrances leading into the public entrance hall. The first of these is the historic entrance beneath the columns leading out onto Liberty Square, while the second is a new entrance that will be built leading out onto Giudashvilli Street. Signage on Giudashvilli Street will indicate the position of this new entrance. There will be direct access to the restaurant on the ground-floor level of the Fine Arts Museum from Giudashvilli Street. This entrance will be created by the addition of a further flight to the existing stairs, allowing visitors to make their way to the ground-floor level opening out on the garden. Signage on Giudashvilli Street will indicate the position of this entrance. Museum Design Concept A Museum of Fine Arts (painting, sculpture, drawings, film, photography and video) that includes works from the 17th century to the present day.

This Museum, presenting the masterpieces of the collection of the Museum of Fine Arts, will also play host to the most contemporary forms of art. Architectural Concept Within the context of the rehabilitation of a representative historical building (1832) (conservation of the façades, stairways, halls and main galleries), the project proposes to restructure the interior in order to open up the space and to allow the alternation of spaces of regular height for small and medium-sized exhibit formats and of spaces of double height for large-format works. 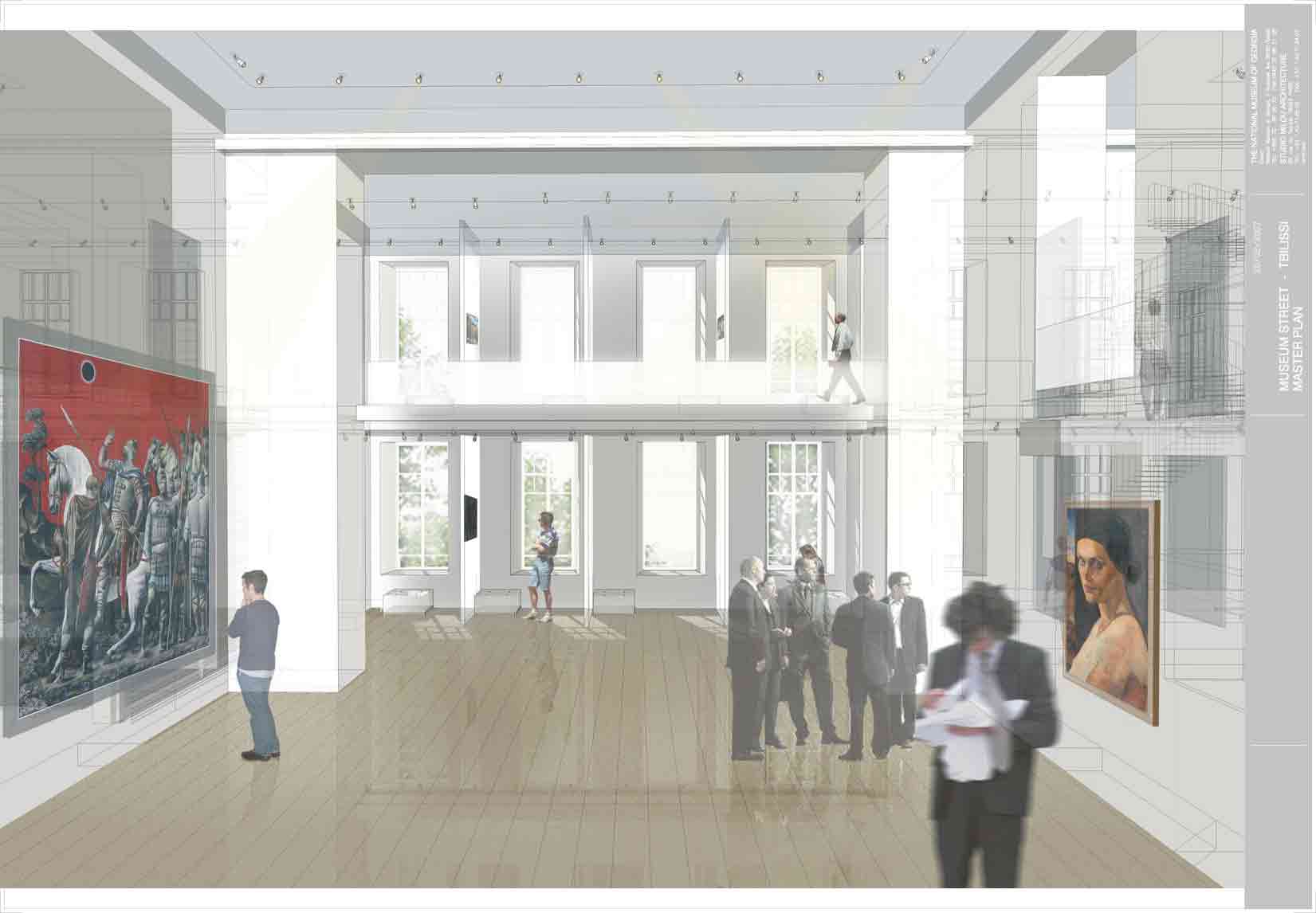 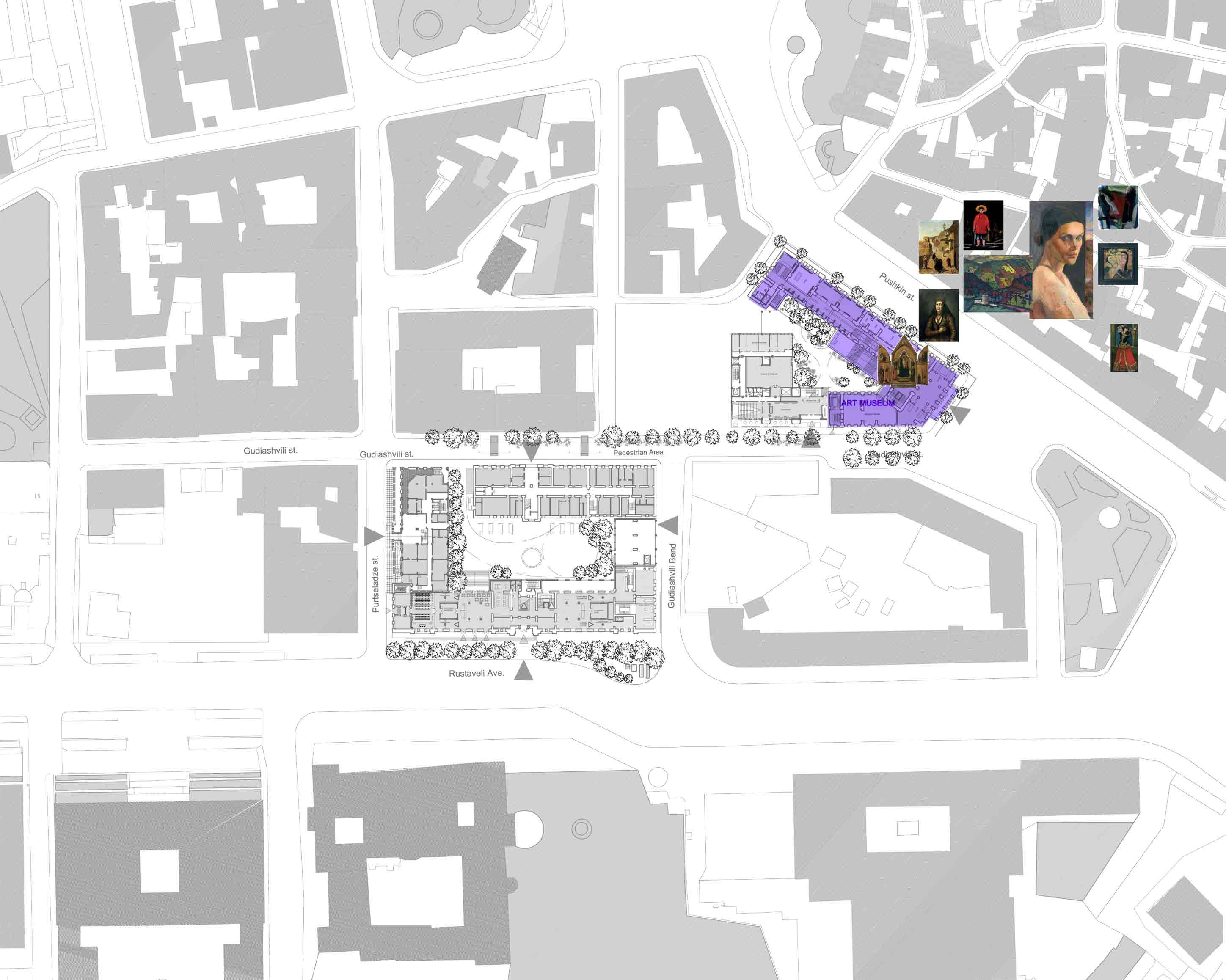 Collection of the Fine Arts Museum 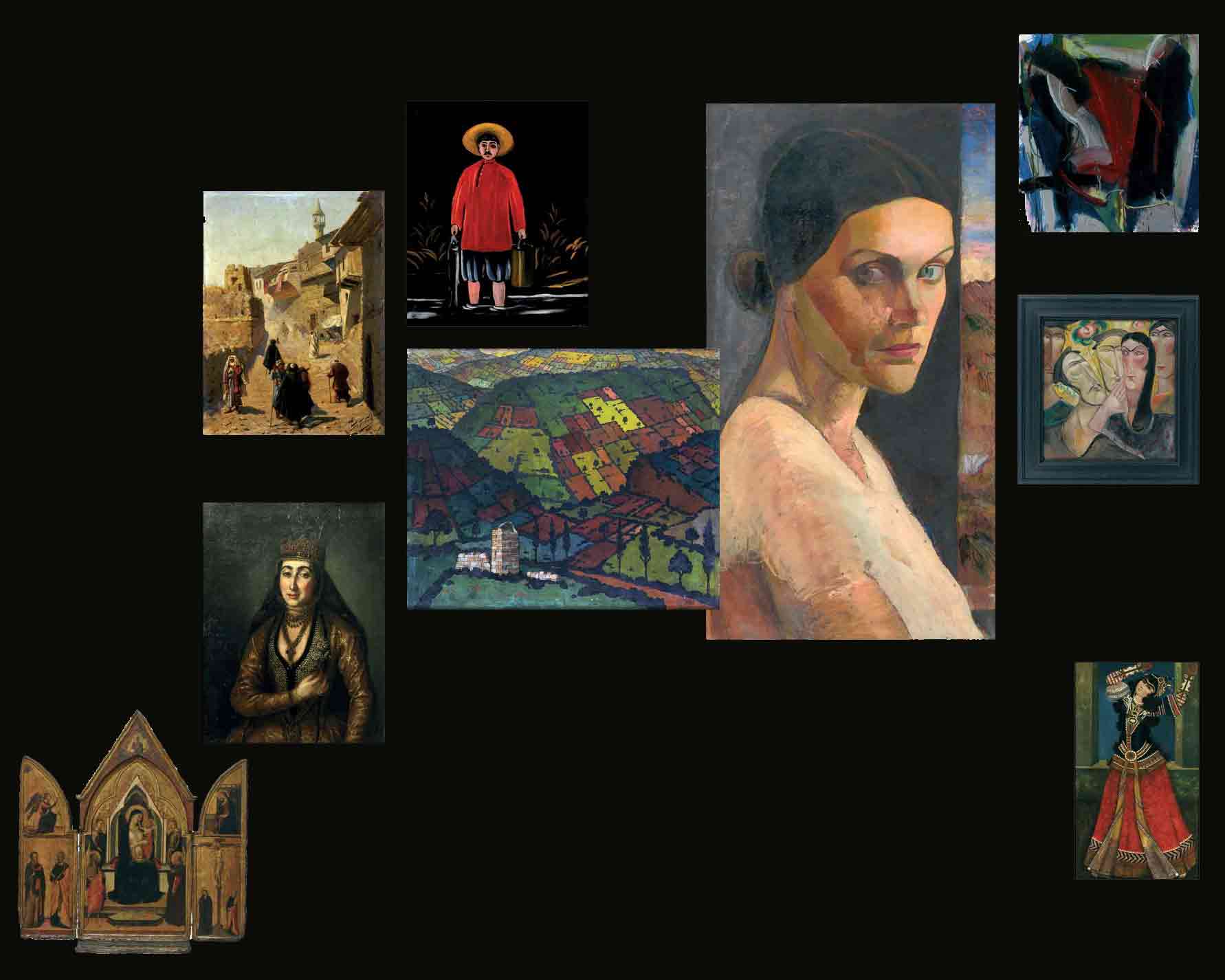 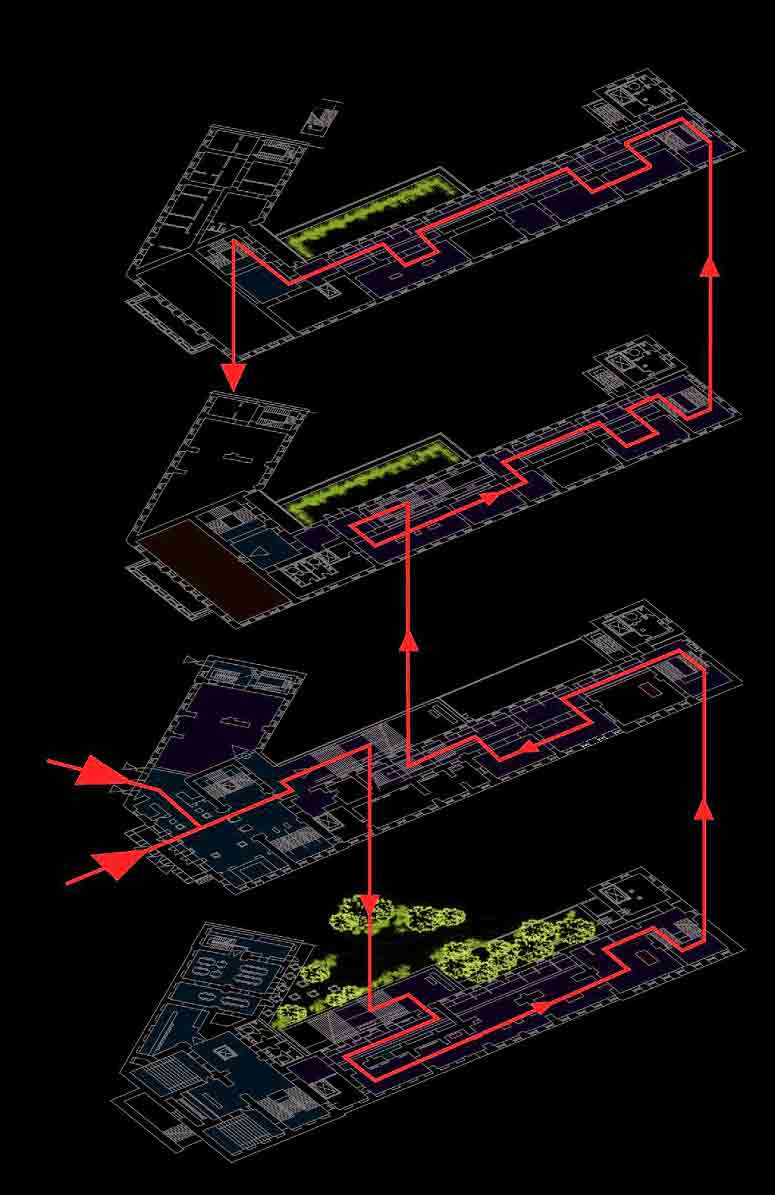 Circulation in the Fine Arts Museum

Collection Presented
Presentation of landscape evolution in Georgia and in the world more generally through the National Museum of Georgia’s paleontology, prehistory and natural science collections. Museum Design Concept Presentation going back in time of the evolution of the landscape (fauna, flora and ecosystem) through the existing collections and through research underway in Georgia and in the world.

Architectural Design
This small-sized gallery will allow an intimate exhibition space to be constructed that is bathed in both natural and artificial light. These two forms of lighting will allow an imaginative design, while presenting the collection itself in natural light. Organization of Space The itinerary will be laid out on three levels dedicated to the four main parts of the exhibition: Level 0 – Introduction; Georgia in the world; Level 1 – Contemporary Georgian flora and fauna; Ecology, extinct and endangered species; Level 2 – Dmanisi, the origins of mankind; the origins of living species; document resource areas. 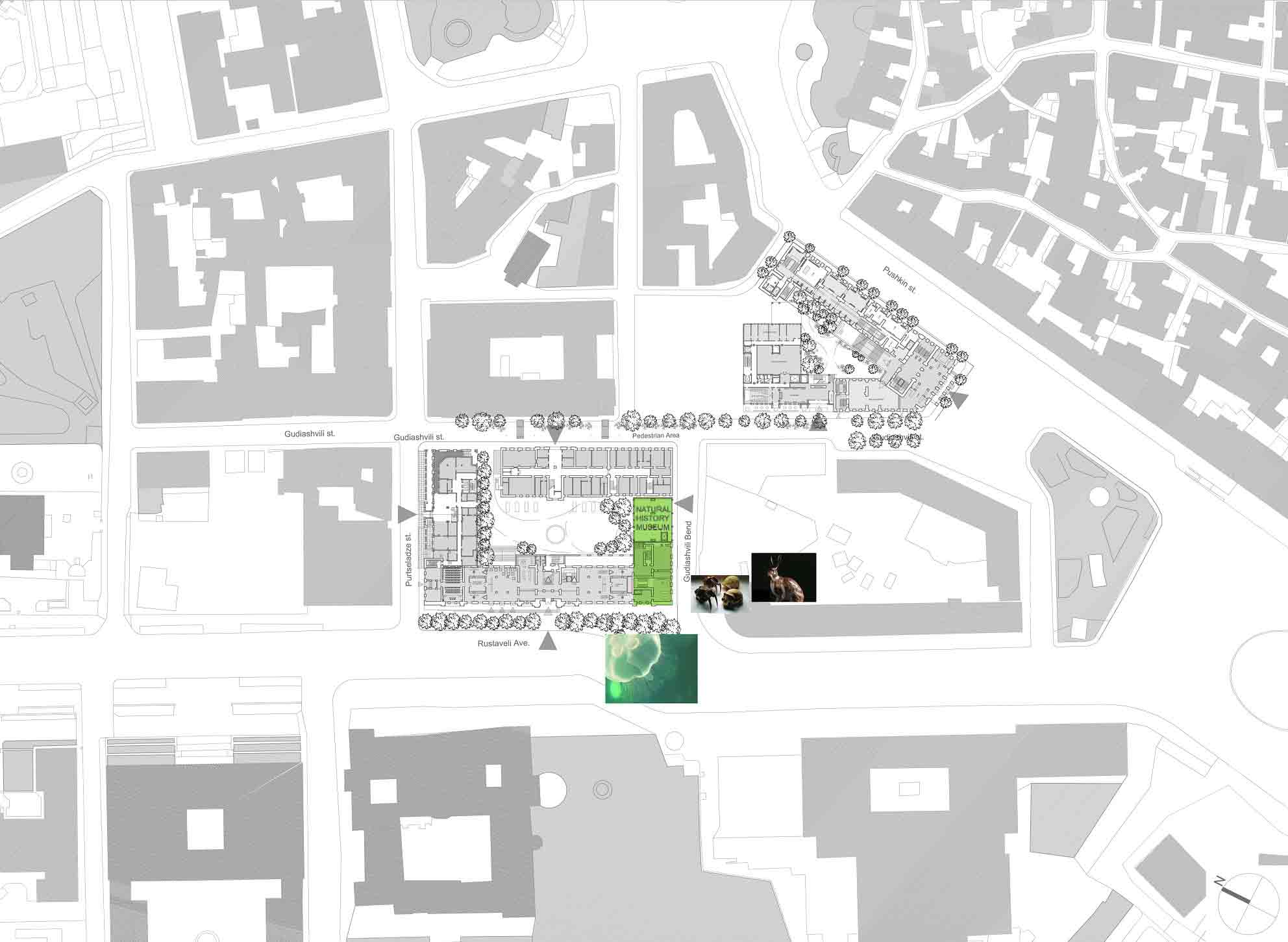 Collection of the Natural History Museum 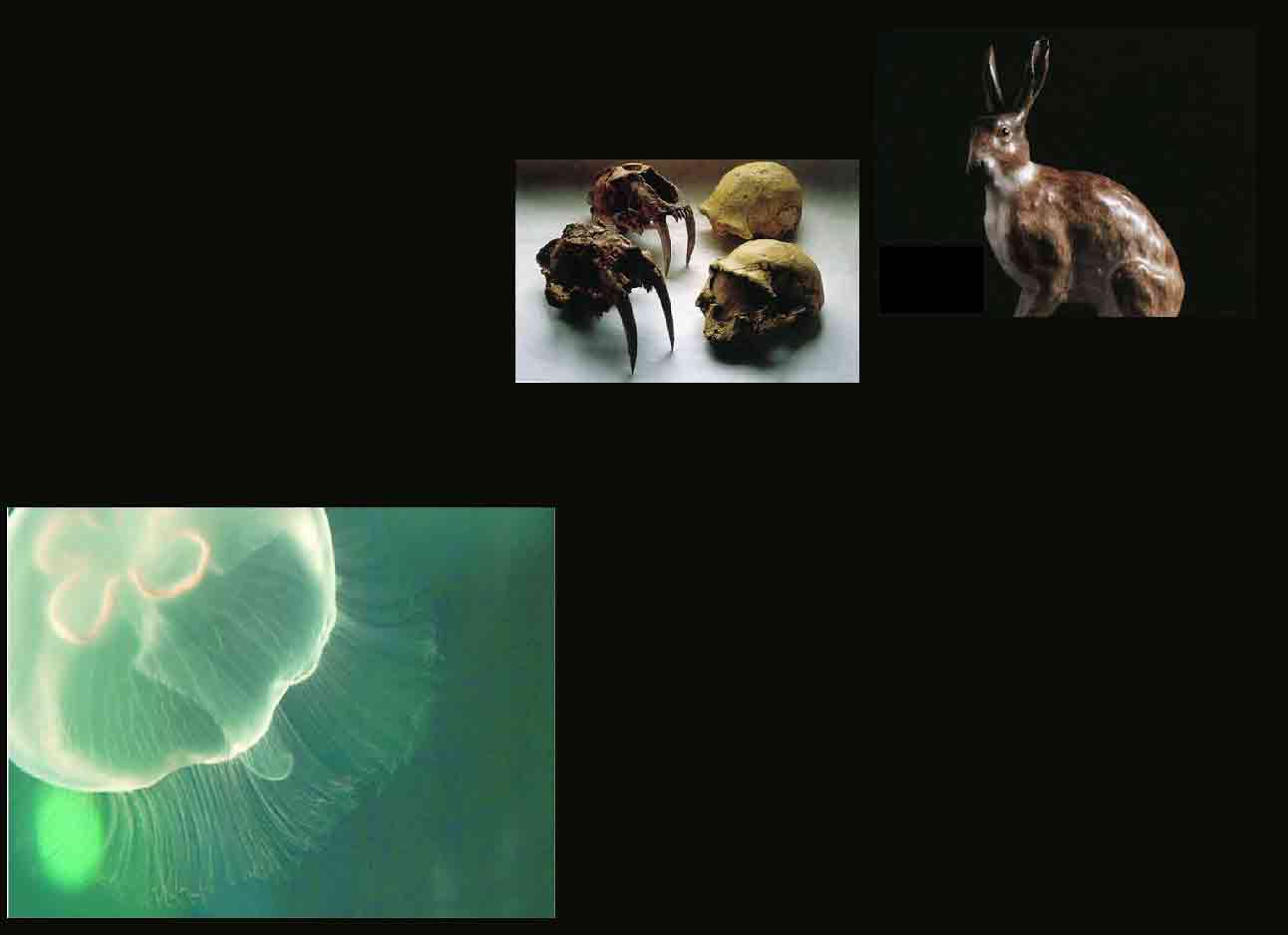